Sometimes, we're racing forward at 35 mph. Everything is going right. Momentum has kicked in. We're flying past the competition And then: WHAM.

This week's guest knows this figuratively, and literally. Apolo Ohno is a world champion speed skater and Olympian with 8 medals, two of them gold. Even as one of the world's greatest athletes, he's hit his share of walls — sometimes on the ice, and sometimes in business, personal relationships, and in his challenging transition away from sport.

As part of the recent “Begin, Grow, Pivot & Learn” event, Whitney had a chance to interview Ohno about his life after the Olympics (a time he calls “The Great Divorce”), which taught him to stop saying “no” to new experiences and explore strengths and weaknesses he never knew he had.

Ohno also shares insights from his new book, “Hard Pivot,” which is available everywhere on February 22. 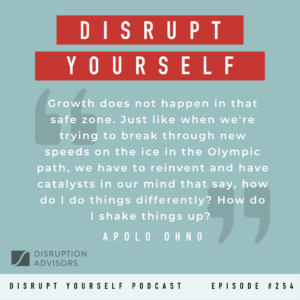 Listen to the episode in the player below or download and enjoy it on Apple Podcasts. If you found   this or other episodes of Disrupt Yourself useful, please leave us a review!