272. Anne Chow: There’s No Such Thing as Failure – Only Success & Learning

Getting your “big break” rarely comes down to luck. But it's also hard to engineer a breakthrough moment. Anne Chow believes it's a combination of science and serendipity: Planning ahead so you can seize a lucky moment when it appears. Her career embodies that philosophy.

Anne is the CEO of AT&T Business, and a 2nd generation American. As the daughter of Taiwanese immigrant parents, their outlook on success was tremendously formative for her.

She's a Julliard-trained musician who became an engineer before one mentor suggested she try sales as a path to leadership. Despite being rejected multiple times, she credits that unlikely S Curve jump as the key to her long-term success as an executive.

Anne and Whitney discuss the resilience it takes to stay with one organization for so long, how to make our inherent human biases work for us, and why it's time to re-think what retirement looks like in the 21st century. 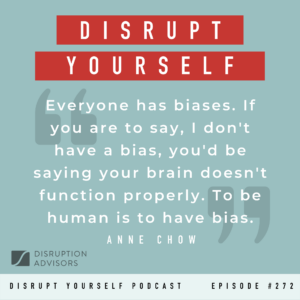