My friend and colleague Becky Robinson recently shared with me Alexandra Watkins story – which I love!  And she's just published a book titled Hello My Name is Awesome: How to Create Brand Names That Stick.  Enjoy!

Growing up in a California beach suburb, I was hardly an academic superstar. High school bored me. My dream was to work in advertising like my TV hero, Darrin Stephens on Bewitched. I dreaded the thought of going to college and spending 4 more years in a classroom. Thankfully, my mother understood this, citing her favorite adage, “You can lead a horse to water, but you can’t make it drink.” Dad agreed.

As luck would have it, an advertising trade school had just opened in my town. After just one semester had moved way beyond Darrin Stephens. Legendary ad man David Ogilvy was my new role model.

Upon graduation, I talked my way into an internship with one of my instructors. Over the next few years, I worked at a series of small agencies, eventually making it to Ogilvy & Mather, where I happily worked for five years as a copywriter. 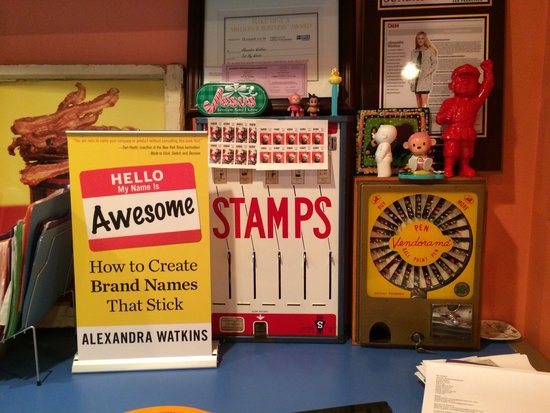 As a copywriter, every once in a while, I would get thrown a bone and get to name something. I loved it. But I had no idea that naming was actually a profession. When I discovered this, I didn’t want to be a copywriter any more. I wanted to be a professional namer!

I heard that the place to “make a name for myself” was legendary branding firm, Landor and Associates. Surely they would want to hire me. Not exactly. While, I had the talent to work at Landor, I didn’t have the pedigree. No degree in Latin. No degree in Linguistics. No degree in anything. My resume was ignored, as were my many creative attempts to get their attention, including sending a photo of my dog, and all of the names I came up with for her.

I finally did get into Landor because of something I dared to do…. on a Match.com date. (No, not THAT!)

It was Saturday night, my third date with Samir. We were going to a cocktail party, where I would be meeting his friends. Despite being an extrovert on most occasions, I’m very uncomfortable walking into a room of people I don’t know. So I asked Samir to tell me about the guests in advance. He talked about Susan from work and Dave from his bike team. Then he mentioned his friend Anthony, who WORKED AT LANDOR!  Excitedly, I said, “You KNOW someone who works at Landor? What does he do?” Nonchalantly, Samir replied, “I dunno. Head of naming or something.” Elated, I grabbed a handful of business cards, which, as a freelancer, I always kept by the door. Disapprovingly, Samir said, “What are you doing?” I replied, “I want to meet your friend Anthony, so I’m bringing my cards.” “No you’re not,” he replied. “Alexandra, it’s Saturday night. This is a cocktail party, not a networking party. Leave your cards at home.” I explained that my dream was to work as a namer for Landor and this was my big break. Samir rolled his eyes, I grabbed some cards, and off we went. In silence.

At the party, Samir would not point out Anthony to me. I spent the first hour eavesdropping on every conversation until I heard someone say, “Hi Anthony,” to a friendly-looking guy in a top hat. Bingo! I moseyed into the group and introduced myself. A jovial Anthony curiously asked, “Alexandra, what do you do?” I took a deep breath. Then I lied through my teeth. “I’m a product namer, I announced.” Anthony couldn’t believe it and exclaimed, “No, that what I do!” Playing dumb, I said, “You do?” Anthony went on to tell me who he was. Then he put me on the spot… “So what have you named?” Well I had actually named some things, so I reeled them all off including a Gap travel makeup kit named Dash and website named AngelPoints. Then Anthony said those 5 magic words, “Do you have a card?” While I pretended to dig around in my purse to see if I had a card, I looked over at Samir, who was watching from the bar with an incredulous look on his face. Priceless.

A few weeks later, Anthony hired me on a potato chip naming project for Frito Lay. I was hooked. Landor eventually gave me enough work to open my own naming firm, Eat My Words.

Fast-forward ten years. I’ve become enough of a brand name expert that a publisher asked me to write a book about it. “Hello, My Name is Awesome: How to Create Brand Names That Stick,” just rolled off the press this week.

I dreamed. I dared. I broke the rules. And I’ve never looked back.

Alexandra Watkins is Founder and Chief Innovation Officer of Eat My Words, a verbal branding firm known for creating names that make people smile instead of scratch their heads. Her names include Spoon Me frozen yogurt, Church of Cupcakes, Neato robotic vacuum, and Gringo Lingo language school. Despite not going to college, she is a frequent guest speaker at MBA programs and has been invited to present on multiple occasions to Stanford GSB, Haas Business School at Berkeley, and USF School of Management.