146. Angela Blanchard: The Measure of a Great City

It may be sad to think about, but we have culturally become accustomed to seeing the immediate aftermath of natural disasters. Dramatic visuals of fleeing citizens, devastated buildings, and heroic rescues fill social media feeds for the days immediately following the unthinkable.

But that is not the end of the disaster.

Angela Blanchard’s life’s work revolves around communities and individuals who are trying to rebuild and rebirth themselves after disaster strikes. Recovery is not limited to a few weeks or months after the first newscast; most take years of hard work to even begin to heal. Angela has been in the trenches after the devastation of hurricanes, like Allison, Katrina, Rita, and she’s walked through fire-scorched earth in Australia. She’s helped establish shelters that have accommodated thousands of “guests” at a time—a term that Angela feels passionate about.

“One of the early rules I establish is we were only going to refer to the people in the shelter in Houston as either guests or neighbors. We were not going to use survivors, refugees, because they were, in fact, our guests… it was a reminder that the only thing separating the people coming through the front door and people coming through the back door to volunteer in Houston was, sometimes, just a block or two where the water hadn't reached.” 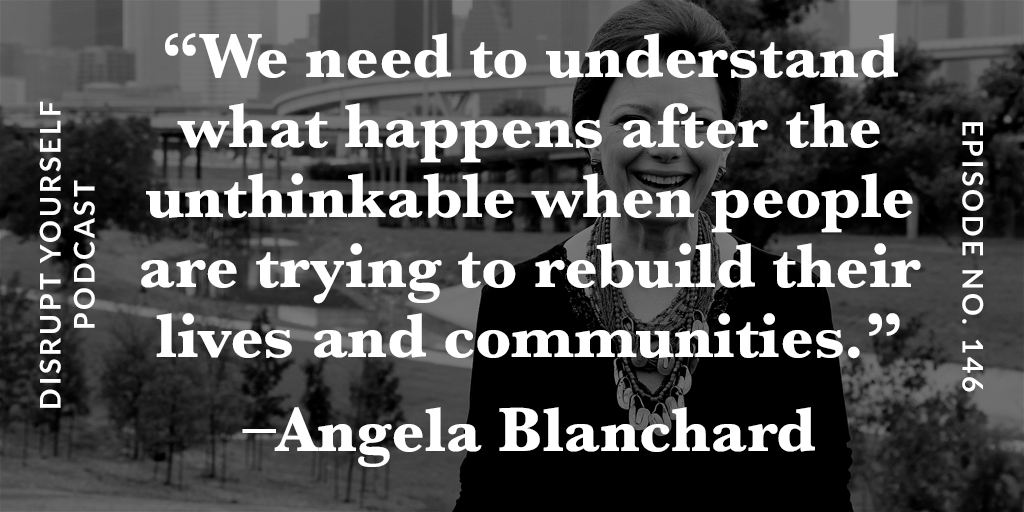 I find Angela inspiring to listen to, not only because of her boots-on-the-ground dedication to helping others, but also because of her work as a professor at Brown University. She loves working with students and focusing on what they can do today, rather than worrying about creating entire social movements for tomorrow.

“[D]o what you can, with what you have, where you are right now…Have the ability to scan the environment, find the assets, resources, and strengths within the people around you. And then much like a gardener, how do we nurture and cultivate that into something larger and greater that includes and feeds more people.”

I love how she is teaching them to embrace their constraints and then START. Leveraging the accelerants of disruption to build those who have been disrupted. Inspiring!

Join us as we discuss the measure of a great city, the concept of “No one’s coming,” and how when everything is lost we can be the ones to stand in the gap and stabilize those who have been disrupted in unthinkable ways.

Listen to the episode in the player below, or download and enjoy it on Apple Podcasts. If you’re so inclined, please leave us a review!