Asi Burak is CEO, Power Play; and Chairman, Games for Change. He has also been named one of the “Digital 25: Leaders in Emerging Entertainment” by the Producers Guild of America (PGA) and Variety Magazine. And he’s my guest on Episode 15 of the Disrupt Yourself Podcast. 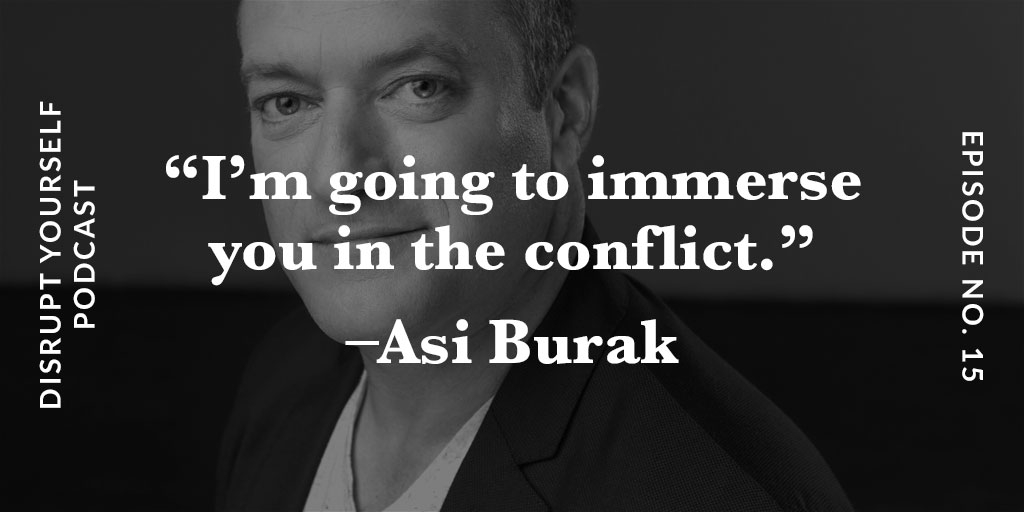 Of course, we talk about the book he recently co-authored: Power Play: How Video Games Can Save the World. We talk about his cutting edge, social change- oriented game, PeaceMaker, which takes gamers inside the intransigently difficult perspectives of the Israeli-Palestinian conflict, and forces them to be decision makers on issues of life-and-death consequence. I hope you’ll listen to the entire podcast, because Asi Burak is a man on a mission to make the world better through gaming; or rather, to make gaming an agent for social good in the world.

Besides these better known initiatives, Asi talks about some other interesting developments in the growing effort to disrupt the game industry from commercially-focused complacency; the medium is too powerful NOT to be used for good, he says. Here are a couple of my favorite discoveries in the interview:

1-Cutting edge work at the intersection of gaming and virtual reality designed to help NFL athletes, particularly quarterbacks, improve their decision-making time. The technology is also being used to develop empathy in players, particularly around the issues of gender and domestic violence, in the hopes of improving not just on-the-field performance, but off-the-field bad behavior.

2-Walden, described by Asi as an “art piece” allows gamers to experience the famous pond and its environs as Thoreau did, focusing on the connection with nature. As a former, long-time resident of Boston, this might be the offering that makes a gamer of me.

3-Re-Mission, designed to help childhood cancer patients navigate their treatment. I found this particularly inspiring. As Asi describes it, these young people know that their therapies are good for them but they are not mature enough to always have the discipline to be as consistent as they need to be for effective treatment. Re-Mission makes the connection that “in their body there is an epic battle going on, on a daily basis…and the game connects the epic battle to the drugs and basically says, ‘Look, in order to win that fight, you need the ammunition.’ What they showed in clinical trials is that kids that played Re-Mission for a month were much more consistent in taking drugs and following doctors’ guidelines for six months.”

Hear the podcast and hail the power of video games for good!

Show Notes/Resources Mentioned in the Show and Transcript:

Powerplay: How Video Games Can Save the World

“Ender’s Game”: My Escape from Reality

Half the Sky game

Half the Sky book

The Undoing Project by Michael Lewis