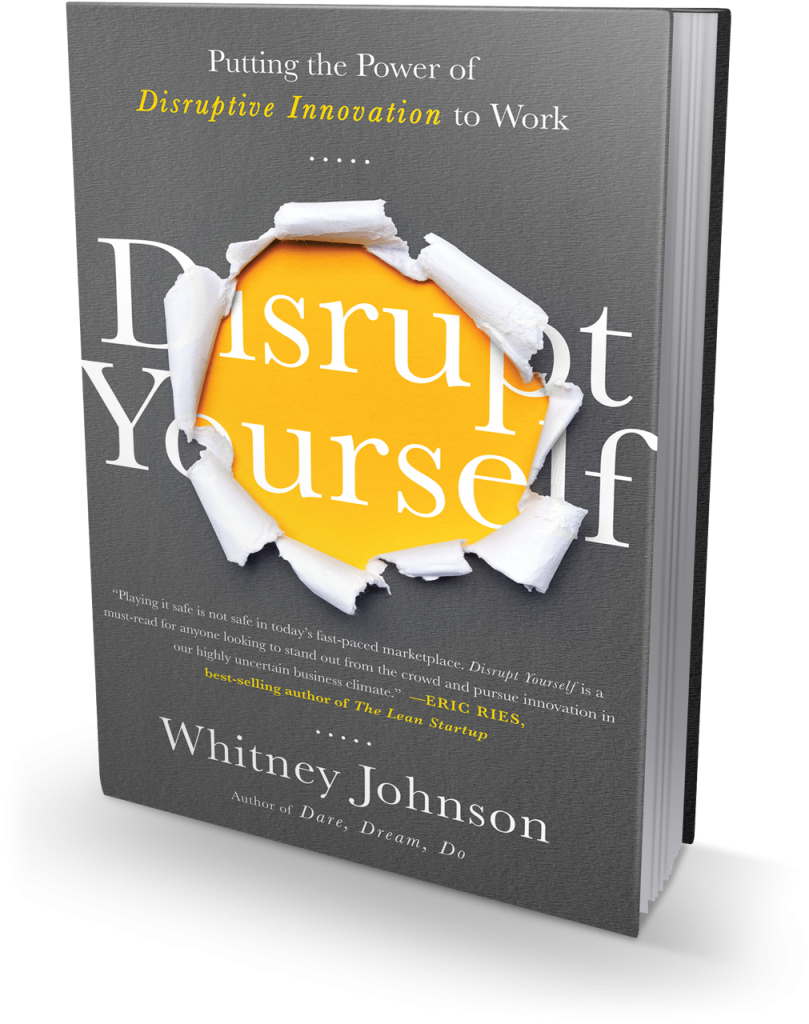 Oft-spoken though it is, ‘disruption’ is not a catchword; it’s a powerful force transforming organizations, communities, and ultimately the world. But it starts small, as an individual choice to change. Companies and organizations don’t disrupt unless their people do.

Individual disruptors upend their companies in ways not always welcomed by their associates. Disruptors can be seen as a fifth column, undermining the familiar and comfortable status quo, not to mention their colleagues’ territorial aspirations. One example:  an HR program manager (we’ll call him Ben) employed in a storied Silicon Valley company leveraged his distinctive strength of coding to write a program that remediated a departmental pain point—a full-application ecosystem and operational dashboard complete and in production in less than a month at zero additional cost to the team. His colleagues in IT had to decide whether to “bless” his initiative and solution, or reject it because he had inadvertently done their job quickly and affordably. They opted for the latter: instead of cheering, they booed.

In reality, it is the status quo and those who defend it that are the enemies within. Disrupt or be disrupted is the battle cry. According to a study conducted by Accenture, high-performing companies that surpass their peers on financial metrics across business cycles and leadership eras, are those that develop capabilities before they need them. Average and low-performing companies don’t. Meanwhile, companies that support and encourage their employees’ dreams — the engine of disruption — breed loyalty, resulting in higher profitability. According to Towers Perrin, Intl., organizations with a highly engaged workforce increased operating income by 19.2%, while low engagement led to a 32.7% decline in operating profits.

As the ever-pressing imperative of driving performance collides with a massive cohort of millennialsbringing their dreams to work, I am naming 2016 ‘The Year of the Disruptor.’

Here’s what I expect to see:

Rising in-house mobility. Managers recognizing the potential value of their disruptive employees will clear their path, green-lighting dreamers and innovators and speeding new ideas on to realization. Instead of obstacles thwarting progress, managers and co-workers will be facilitators, like a team in a cycling race helping the fittest riders rise to the top.

Real stretch assignments for promising talent, with a real potential for failure. Instead of over-protection, managers will allow a risky playing field for employees to explore dreams and ambitions, and cumulate the competence and confidence to play where others aren’t playing — a hallmark of innovation.

Rewards for talent developers. Management thinker Dave Ulrich said it well, “Instead of asking Donald Trump how many millions he’s earned, ask how many millionaires he’s created.”  The new performance metric for managers will be the number of their reports who have been promoted coming out of their department or for whom they have brokered a move. A real leader will be willing to promote the person who could replace them. Managers add value by developing untapped talent, and build morale and momentum, pushing innovation into hyper-drive.

Success celebrated. Genuine praise and tangible remuneration will be available for all who work hard and employ their distinctive strengths, hand- in-hand with bona fide bottom-line growth. Personal disruptors will be celebrated and rewarded with open doors to additional innovation.

Job-training to train, not retain. Opportunities to learn and do more will be the normal modus operandi, instead of a last-resort tactic to placate disgruntled high value employees. Employees that are already firing on all cylinders will be groomed for additional responsibilities, and innovators and entrepreneurs will take on challenging new tasks because they want to, not because they have to.

Stock price fluctuations. Disruption from within may lead to short-term loss of productivity in order to garner long-term gains. The dips in stock price may take your breath away, but you’ll see higher value for your equity over the long-term. Change can be accompanied by growing pains but they will be growingpains, not the more acute discomforts that accompany ossification or degeneration. Sometimes the way forward requires a side-step, or even a step back. The way to change the game is to start anew.

Engagement. Loyalty. Innovation. High-performance. Higher profits. Social change. Impressive outcomes due to one simple input: encouraging personal disruption. It’s easy to talk about; a little harder to actually do. As one who talks about disruption, my resolution for 2016—The Year of the Disruptor—is to continue to disrupt myself. To lead by example. And equally important, I’ll be watching for fellow travelers on, as the poet Robert Frost labeled it, the ‘road not taken.’ Looking to assist, to encourage, to reward. Looking to celebrate and cheer for their success.