Elizabeth Keeler |The Next Wave of Feminism

Below is a post from Elizabeth Keeler.  Previously she wrote A Farm Girl's Dream and you can also find her writing in Dare, Dream, Do.  Enjoy.  The art is courtesy of Leslie Graff.

A few months ago I accidentally stepped back in time to the decade before the cultural revolution of the 60’s. It was just as I imagined it would be, minus Don Draper, (a sad occurrence) and without a wardrobe of 1950’s dresses (a full-on tragedy.) But otherwise, everything was as it would have been if it were 1955. I was newly married and newly unemployed, and for immigration reasons was unable to work or travel. In a matter of weeks I went from financially independent professional to Stay-At-Home-Housewife. I handed in my laptop for an apron and The Joy-of-Cooking (With-TransFats apparently). It was all there for me, the laundry, the lists, the kitchen, the Comet cleaner, and the daily anticipation of a hard-working husband coming home to smack his lips on my casserole. It was with surprise and pleasure that I discovered the many ways one could roast a chicken, and how many friends would discuss this critical issue. One more twist to this story: I found out during this time that I was pregnant . Ahhh…the story was complete, as was my happiness. Amen. 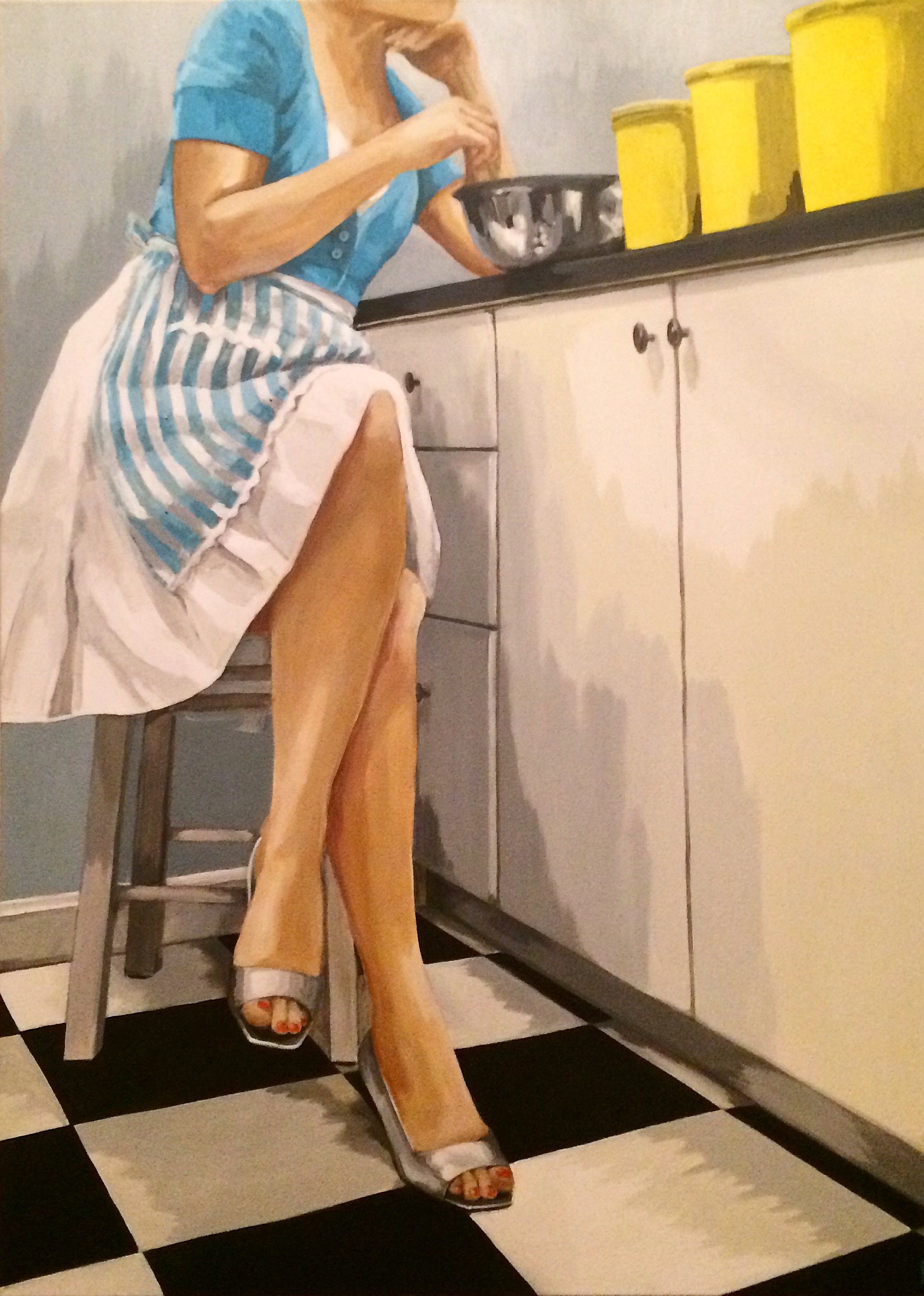 Except that it wasn’t. The 2014 version of me had undergone a severe shock to her mainframe while traversing the decades in reverse. Version 2.014 had operated strictly on bits and bytes of independence and a smug control of her universe. The only virus that had occasionally attacked the OS was the ‘I’m not married’ virus, which could be generally well treated with a pedicure or a visit to Bloomingdales, paid for in full with her very own credit card. Suffice it to say, v.1.955 of me found herself quite miserable. In keeping with the times, naturally. I forgot to put on more lipstick, pop some prozac, and smile just a tad longer than was natural.

I realize this sounds incredibly over-wrought and I mention my misery (while real) with my tongue in my cheek. I had found true love at age 34 and had a baby on the way without medical intervention. I was not ravaging garbage cans for leftover supper nor was I being deported. Actually, I was married to a man who was totally happy to pay for the roast chicken, smack his lips over the roast chicken, and clean up the roast chicken, without any expectations whatsoever, at least as far as roast chicken was concerned. Complaining is a truly glass half-full-and-I-only-drink-Perrier kind of attitude. But let us all acknowledge that the definition of first-world problems is to wring our hands over inconvenient luxury, and carry on.

The reason I tell this story is that going back to 1955 gave rise to a very interesting phenomenon. As I went about my housewifery, I began to hear voices. They were the voices of women in coming decades come to haunt me. Not unlike the ghosts of Christmas past, these Voices began to reverberate in my 1955 kitchen like ghosts of Feminist Future. As I removed bran muffins from the oven, I would hear battle cries of women who would forge the cultural revolution, calling me to carry the torch. Then came the voices from women in the 80’s with big hair and attitude who would break the glass ceiling with bloodied fists because the axe was locked in the boys’ room, chiding me as I folded my husband’s laundry. I was haunted by future female political leaders looking around for successors and finding no one. Future mentors with I-told-you-so eyebrows and business school friends who would have babies in grad school looked askance across the coming decades. The loudest voice of all was Sheryl Sandberg’s. Her megaphone blasted backwards through the decades, blaring “DON’T LEAVE BEFORE YOU LEAVE.”

But there were other voices, too, that said, why work if you don’t have to? Take it and run, girlfriend! Some said, trying to have it all was misery, others said, misery is to be lukewarm. Others, that maternal time was more precious and you’ll never get it back. 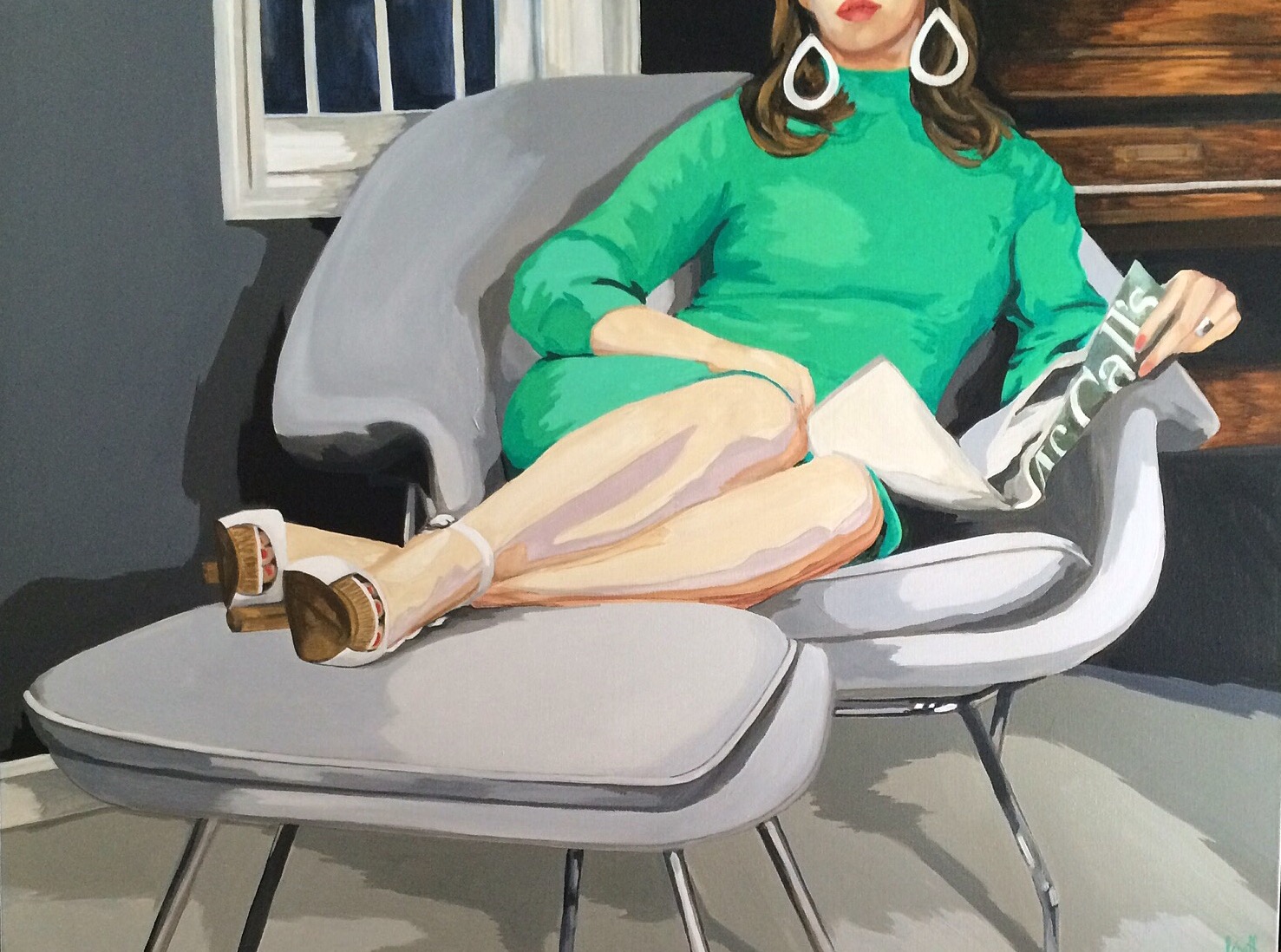 The torment became more acute as D-Day (the day I would be legal to work again) grew closer, which would also be the day I would jettison back to 2015. That day would require a decision on my part: what would my role be in my new life, now that I was expecting, and now that I had experienced 1955? Would I pick up the torch, or bury it in the sands of Santa Monica? If I left it alone, would it light again someday? What about my baby, what now? The weight of shoulds and should nots became heavier than I had ever known them to be. I kept looking at my GPS for directions for True North, but Siri had multipled into decades of different Siris, all with a different destination. I didn’t know where I should go or how to get there, only that there was definitely somewhere I SHOULD go, and it was urgent! (You could just do what makes you happy? my husband offered in bewilderment as he watched me pull my hair out. I paused to condescendingly to reply that “life for women in the coming century was not that simple, and besides, you don’t mean that, no man actually means that without meaning something else which meaning is meant to be meaningfully mal-intentioned.” It was all the time I could spare from hair-pulling to give advice to the well-intentioned but lesser evolved sex).

Well, D-Day occurred and I am happy to report to readers that I had a safe transport back to 2015. I would like to report that my GPS worked much better in its native decade and I am now en route to Liberated Woman’s True North. Unfortunately, it’s not true. The GPS in 2015 was as helter skelter as ever. After a few false starts and abandoned journeys, I have had to resort to more primitive modes of compassing, such as following the movement of stars and the sun from East to West. I am still lost in the present wilderness, but I believe I’m on the right track, because I’ve started listening to a voice I hadn’t heard in awhile: my own. I am surprised that it whispers so quietly in this new polyphony of pregnancy, when it used to be the only voice I could hear. My destination is unclear and I still worry about True North and Can I Control Everything About It!!! (Hopefully I Can Redecorate) but in my better moments I let go and focus on listening. My goal is simpler now: listen to my own voice, face True North, and start walking. Focus more on my orientation than on what the destination will look like and whether other women will think it’s okay. 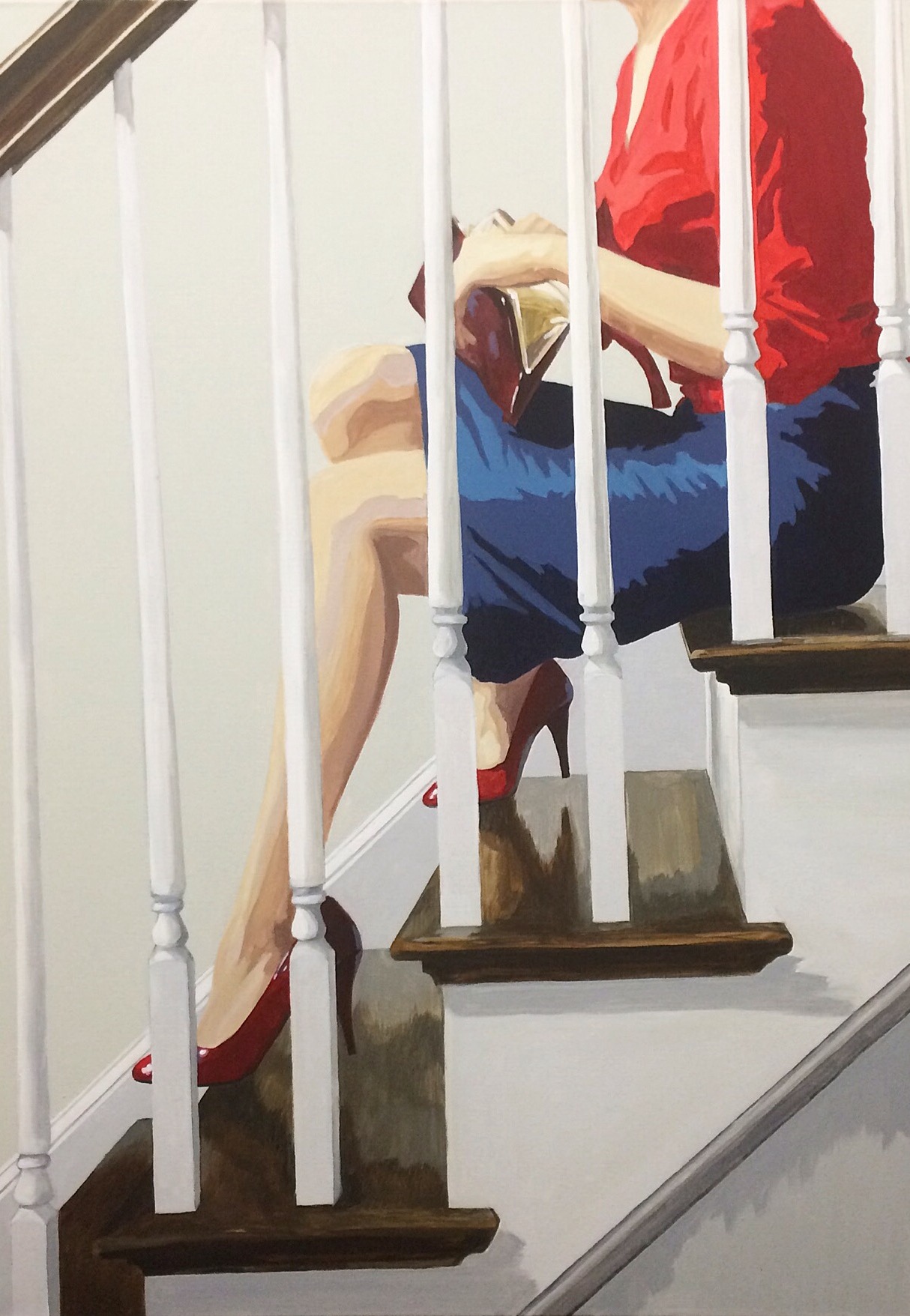 My journey through time has made me prone to philosophical meanderings – I hope you will indulge me momentarily. To start, I must disclaim that my ironic tone in describing the voices of Feminist Future does not mean that I wish all women everywhere would put a cork in it and stop giving advice. It would be the greatest tragedy to silence the voices coming down the ladder to illuminate the way. On the contrary, we ought to have the richest anthology of voices possible, in keeping with the purpose of this blog. One must devour everything in the library before one is ready to write. Those with the bane and boon of louder megaphones MUST continue to speak into them, in spite of backlash. So please Sheryl Sandberg, Anne-Marie Slaughter, Whitney Johnson, and every woman who has written on this blog, don’t stop dishing it out.

But it is the responsibility of women in my generation and subsequent generations to stop translating every voice as ‘I am not enough’. We must listen in order to be wise. And then it is our job to absolve ourselves of the guilt of difference if we diverge, instead of waiting for society to tell us our path is okay. New paths are never okay, old paths are seldom right. The sacrifice of past decades should not be a call for every young woman to march to the top (although I hope many do!). The feminist revolution was not intended to create a single file path pathway to success, but rather to move us to a world where there is a plethora of paths, and each woman can forge her own rather than march single file to someone else’s top. Perhaps this is the next wave of feminism: a multi-verse of women who can listen to each others’ voices without torment, and still hear their own voice loud and clear, with full and complete freedom to follow it.

Following graduation from BYU's MBA program, Elizabeth worked in San Francisco, London, and Los Angeles for various start ups doing business development. She grew up in Alberta, Canada, holds a B.Mus in Piano Performance from the University of Calgary, and a M.A. in English Lit from UBC.  She now calls Los Angeles home. Please feel free to reach out via email: Elizabeth.keeler@gmail.com.