Next week is the re-release of my book, Disrupt Yourself, with Harvard Business Press, and in anticipation of this event we are continuing our look at the seven-point framework of personal disruption. Today, our interview focuses on accelerant number seven: be discovery driven.

In the movies, a protagonist’s career typically falls into one of two categories: either they are in a job they hate (either secretly or not-so-secretly), or they are boldly reaching for their “dream job”—something they have dreamt of from childhood and jumped at every opportunity to achieve. That’s how careers work, right? You either love it, or you hate it. And everyone should know by the age of five that they want to grow up and be a journalist or an architect.

Hopefully, you can see where this is going.

I begin each episode by asking my guest what they wanted to be when they grew up because the reality of most people’s lives is that we don’t end up where we thought we would be when we were five. Small children have a limited view of what is available for an occupation, and many people will ultimately end up in a career that hasn’t been created yet. Did any child thirty years ago dream of becoming a social media specialist? 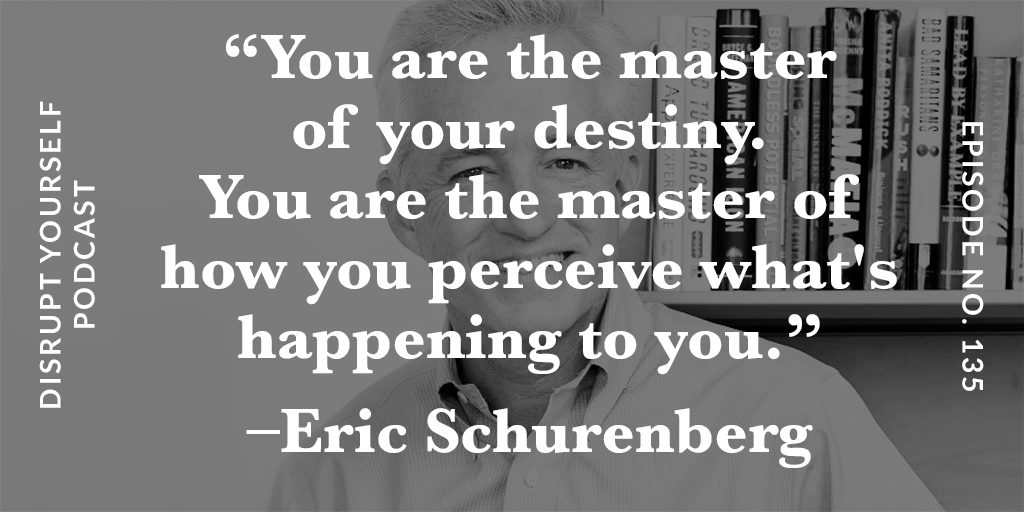 It’s okay to end up in a place you didn’t expect. Just ask Eric Schurenberg. As with most of our guests, Eric’s path was not a linear one. His post-collegiate occupation was acting, but after finding some success he realized that the lifestyle no longer matched his ideals. Pivoting, he went back to school and launched himself into the world of journalism. His career continued to be punctuated by strategic pivots, with the end result being that Eric is now the CEO of Mansueto Ventures, the media holding company that is home to Inc. and Fast Company.

Working at Inc. has given him a birds-eye view of the world of entrepreneurs, and he has felt honored to write their stories. Despite setbacks and unexpected bumps in the road, Eric has seen business owners stumble and pick themselves back up again, and it is in their resilience that success is found.

Every entrepreneur goes through some hardship. Some moments where they have to face the reality that they screwed up…and they have to distance themselves personally from that mistake, realize that that was not them, that doesn't define them, and it's just an opportunity to grow. Every, every entrepreneur, I think, has that mindset. In the Gallup survey that we were talking about it, it registered as grit, resilience, determination, but I think it's also sometimes defined as a growth mindset – the setbacks as opportunities and not defining shortcomings in your own makeup.

I’m excited for you to hear more about Eric’s incredible journey, as well as the amazing stories of others who have gone before. Hopefully, this will serve as a reminder: as you take the right risks and play where no one is playing, you’ll figure things out as you go, and it’s okay to end up in a place you didn’t expect.