My guest today is Harold O’Neal, a Tanzanian-born American pianist, film score composer, and record producer who has worked with the likes of U2, Jay-Z and Disney. I met Harold at a Silicon Guild/Black Sheep event a couple of months ago, and I was shocked by the amount of talent that effortlessly emanated from him. Whether performing an improvised jazz piece or Hungarian Rhapsody No. 2, Harold merges with the instrument, almost maddening in his ability to use the music as a mirror for his soul.

He can also solve a Rubik’s Cube in 30 seconds.

[T]he first time I did it, it took me about three weeks working on it, hours and hours every day…The second time might’ve took me 24 hours. But the first time I did it, it felt like [being] lost in a cave and you’re trying to get out of this cave. You have no idea where you’re going and it starts to make sense. And then you stumble out of the cave into the open, and you’re like “I actually did it. I found my way out.”

Harold’s description of solving a Rubik’s Cube is also a metaphor for how he learned to play the piano. Around 13 years old, after a brief stint as a flute player, Harold begged the director to let him accompany the band on the piano. When the director asked if he knew how to play, Harold quickly informed him that yes, he could play…but that was stretching the truth a bit. Harold had tinkered with his father’s keyboard at home, but until that moment Harold had never given serious consideration to playing the instrument.

So he was already playing piano in the band. I told him I could do what he was doing. I really couldn’t. I did not know how to read music. So I have…this little window from where I said “I can do it.” He doesn’t know I can’t do it and I have X amount of time to figure it out. So, I’m literally just watching his hands and figuring it out by sight. I’m a very visual learner…and the pressure, the added pressure of me telling him that I can deliver this, that’s…what gave me the fuel, the “do-it” fluid to do it.

As a piano player myself, I am flabbergasted that Harold’s “can-do” attitude worked…but it did. He literally played where no one else in the band was playing, and forged a special connection to the instrument that changed his life forever. 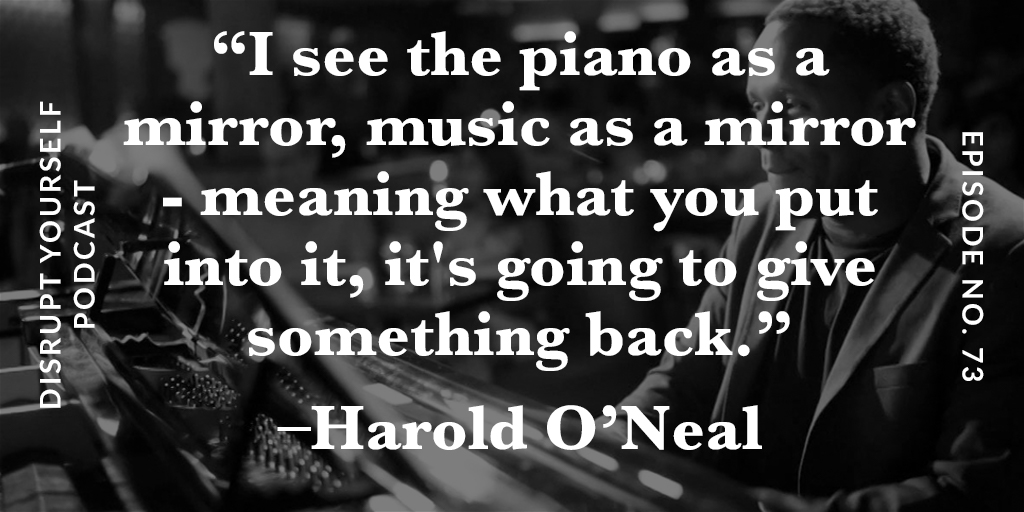 After so much personal success, including playing with U2 in Ireland for Amnesty International and composing music for Disney’s “Tomorrowland” movie, Harold is now working with John Sviokla, author of The Self-Made Billionaire Effect, to show corporations and companies how to find the voice of their customer. It’s a workshop that involves music (of course), and Harold generously demonstrates a piece of that workshop on the show today.

To hear how each of us can improvise our own rhythm and learn to hear the chords of others, download the episode on iTunes or listen in the player below. It’s a fascinating journey—I hope you enjoy it!

Links from this episode: