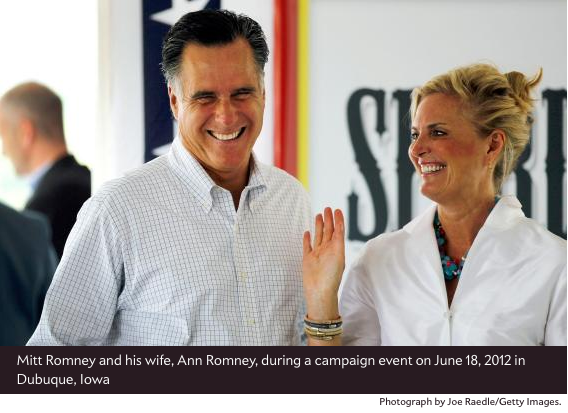 Full disclosure: I will vote for Mitt Romney. As a former governor of the state where I live, savior of the 2002 Salt Lake City Olympics, and a successful CEO and investor with the business acumen to dig our country out of its current economic quagmire, Romney’s excellent polling numbers should come as a surprise to no one. Unfortunately, Mitt has a problem—he doesn’t poll well with women (Obama beats him by 51 to 39 percent according to a Quinnipiac University poll) and many people view him as stiff, plastic, and unlikeable.

This concerns me, because the candidates who win seem to make personal connections with the voters: Obama v. McCain, Bush v. Kerry, Bush v. Gore, Clinton v. Dole, Clinton v. Bush—and then, of course, Reagan. Romney does not generally inspire such passion. The quality he lacks has been referred to as likeability but in my view, it’s the feminine factor.

According to Jungian psychology, our psyche is made up of both masculine (the ability to wield power and control situations) and feminine (our capacity for relating and love) components. To become a complete man or woman, each of us must develop both parts. We must be able to handle power and to love, to become a “ship” and a “harbor.”

In America today, many women are struggling mightily to figure out this balance, often making Solomonic choices around how to be both ship and harbor. We simultaneously feel the tug of our professional dreams, while trying to keep one foot grounded on the dock of family life. Society hasn’t required men, particularly of Romney’s generation, to navigate this push-pull. Male priority has historically been to be the ship, and the more a man can delegate harbor duties to someone else—a wife, or frequently a secretary—the better.

In fact, because so many men routinely outsource the feminine, actually showing an empathetic, emotionally sensitive side has become a highly valuable quality in a man—a secret weapon, especially for presidential candidates. When constituents already view a male candidate as having that commander-in-chief aura and are clearly comfortable with him wielding power, a candidate’s perceived attunement to other people’s feelings can tip the scales in his favor.

Romney is a smart guy. Presumably so are his advisers. One would think they would have picked up on the fact that notwithstanding his executive presence, he’s missing the crucial XX factor. Perhaps he has it but can’t show it; perhaps he just doesn’t possess it. Maybe it’s because of the milieu into which he was born, or maybe it’s because he has no daughters who can mirror back to him the rampant inequality in our society. The most important factor however may be our shared Mormon upbringing.

In The Elephant in the Race, an evenhanded appraisal of unanswered questions about the Mormon faith, Liza Mundy points to “a patriarchal structure

[within the Mormon church] in which men hold the important leadership positions, assisted by a women’s auxiliary called the ‘Relief Society.' ” According to Apostle M. Russell Ballard, who holds one of the highest positions within the church hierarchy, “we can only fire on all cylinders … when the men and women who have been called to serve become part of a problem-solving team.” But in practice (the impetus for Ballard’s pronouncement) women frequently get sidelined. For Romney, it may well be that his leadership model is that men sail the ship and women do what the name “Relief Society” implies, administering relief back in the harbor.

What fascinates me is that I have it on good authority that Romney has the ability to be compassionate; he doesn’t always skirt the feminine. Within our Mormon community there are stories aplenty of Romney in his ecclesiastical role stepping in to help congregants devastated by tragedy, offering spiritual guidance and emotional strength. One of my personal friends, Kenneth Hutchins, the former chief of police in a Boston suburb who also worked closely with Romney at church, shares: “I’ve seen him visit with needy families in gang-ridden neighborhoods, show up in his jeans to help a family move, counsel with individuals who were grieving. I’m also confident that he helped many financially, but he has never disclosed his generosity, nor would he.”

Perhaps Romney doesn’t want to wear his goodness on his sleeve. Perhaps he wants there to be fewer questions about his faith, not more. Unfortunately, it simply looks like he won’t own this part of who he is. Right now, he’s concerned about claims that he outsourced high tech jobs. He can weather this political storm, but outsourcing the feminine, I’m not so sure.

His mostly-male senior advisers may not realize that he needs to tap into his feminine side. If that’s the case, he needs more female advisers. Because if Romney can begin to really acknowledge women (which would benefit his campaign), he might be able to recognize that investing in women is a strategic advantage to the economy. After all, companies with women on their boards perform better for their shareholders, according to a new report. Women are more than a “Relief Society.”

In the U.S., we need jobs and we need innovation. Women are on the front lines and we are innovating, and the brightest minds in business are saying that unlocking the potential of America’s women is where growth will happen. Sheryl Sandberg described it as “lean in”; women are eager to do so. If Romney wants to be elected and save our economy, he needs to give us more than a “relief seat” at his table. Then he may find that women will be more inclined to give him a seat at theirs. We all know Romney has an iron fist. What would happen if he put on the velvet mitt?

This article was originally published at Slate.com.