Julie Anixter | How to Be Better Angels

We live ten miles from Newtown, Connecticut. I learned about the horrific event in an email from my friend Kim, mother of 3 gorgeous little girls who go to school in nearby Danbury, Connecticut, and whose lives, like so many, were forever changed in a single instant of tragedy. My husband, a former high school teacher who'd gone through all the lock down trainings in our last community, where he coached baseball and was called Mr. Bob everywhere we went, wept at our dinner table last night.

We are all weeping. And we are all collectively watching another senseless tragedy unfold.

Our response is what matters now.  We need more better angels.

Earlier this week I interviewed the author Whitney Johnson, hose book Dare, Dream, Do is all about recognizing that our humanity and our greatness lies in claiming our privilege to dream. And then to dare to do something about our dreams.    It's not easy.  It takes courage.

I believe that one of the things that makes innovators different is that we not only see what's missing in the world around us, we are unafraid to step out and and create to fill the void.

What will we create now?  Violence threatens the fabric of all our lives, public and private.   The only possible response to Newtown is to act collectively for a solution. We either have to repeal the second amendment or do something equally powerful to stem this tide of gun violence.

We have to snap out of the comfortable and have the courage to act against violence and to put our arms around the vulnerable, the unstable, the messed up kids and people on the edge and realize that we are all one.

Business Model Innovation, Design Thinking, all the Ted Talks in the world, are the not the answer.   They are fuel for the fire but they are not the fire.

There are role models and there are people who are working this issue that we might now need to elevate into the national dialogue with greater urgency. Two such people are Al McMichaeland Teny Gross. 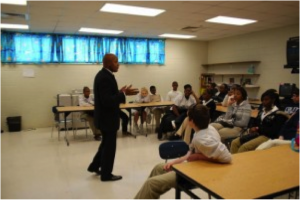 Al is the former Sergeant Major of the Marines Corp.  He spends every minute he can in the classrooms of disadvantaged communities instilling citizenship.  When his foundation works with schools,  graduation rates rise and drop out rates fall.   After serving for over 30 years in the Marine Corps and at NATO,  he lives to serve kids and families.  He is a true American hero. 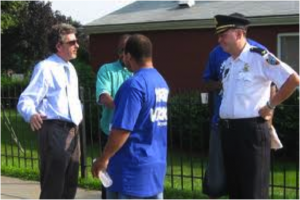 Teny Gross is executive director of the institute for the study and practice of non-violence (gang prevention, youth development, innovating back to civilization) in Providence, Rhode Island.

He has the peaceful warrior temperament and hard boiled realism to work with gangs and troubled communities and his results are nothing short of amazing. 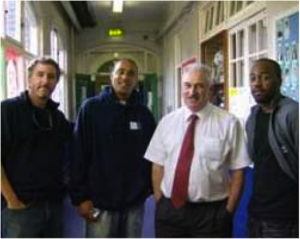 But they're only two men, and a true minority of people who are willing to go straight into the breach.  Who will go with them?  We have a new kind of breach after yesterday,  and it's bigger than the Grand Canyon and will last for the rest of our lives.

As someone who's lived with the aftermath of instant tragedy and the weight of shocking irreversible loss, my mothers' suicide, for 30 years, I can honestly say that the first and most important thing we can do, as we mourn, and after we mourn, is to talk about what just happened and then to take action.  I was with a good friend in D.C. this week whose father in law passed away while we were working together.   We talked about the unreality of death — until it hits you.  We talked about the need to talk.

I've spent my life filling the void that my mother's suicide left, and celebrating her loss and life by finding the courage to keep going in seeking and celebrating others' beauty.  It is really the only thing that has helped me become whole and be OK.

I pray that we will make what happened yesterday important enough, meaningful enough, that we will honor the dead and the living everywhere by finding the courage to act against violence.  There are role models for how to innovate a response to violence (McMichael, Gross, Janet Benshoof and many others) and there are plenty of reasons, at least 26, who from now on will be our better angels, not to slide back into complacency, and not to forget.

Julie Anixter is Chief Innovation Officer at Maga Design and the executive editor and co-founder of Innovation Excellence. The co-author of three books, she's working on a fourth on courage and innovation. She worked with Tom Peters for five years on bringing big ideas to big audiences. Now she works with the US Military, Healthcare, Manufacturing and other high test innovation cultures that make a difference.