Our guest today is June Cohen, a pioneer in the web industry for her work at HotWired (the web division of Wired magazine), author of “The Unusually Useful Web Book,” and the force behind bringing the informational and inspirational “TED Talks” online and out to the world. She co-founded WaitWhat?, a content incubator to develop original media properties over time, and the podcast “Masters of Scale,” which explores the theories behind how companies grow and scale their business.

June Cohen has always been “hopelessly interested in everything.” Travel, graphic design, theater, writing, web technology, journalism—June wants it all. In college, she changed her major several times before landing on political science, meanwhile completing full minors in human biology, African American studies, and anthropology. She has a seemingly natural ability to succeed at everything, and while it makes me jealous, it also raises the question: without the constraint of only being good at a few things, how does she get anything done? 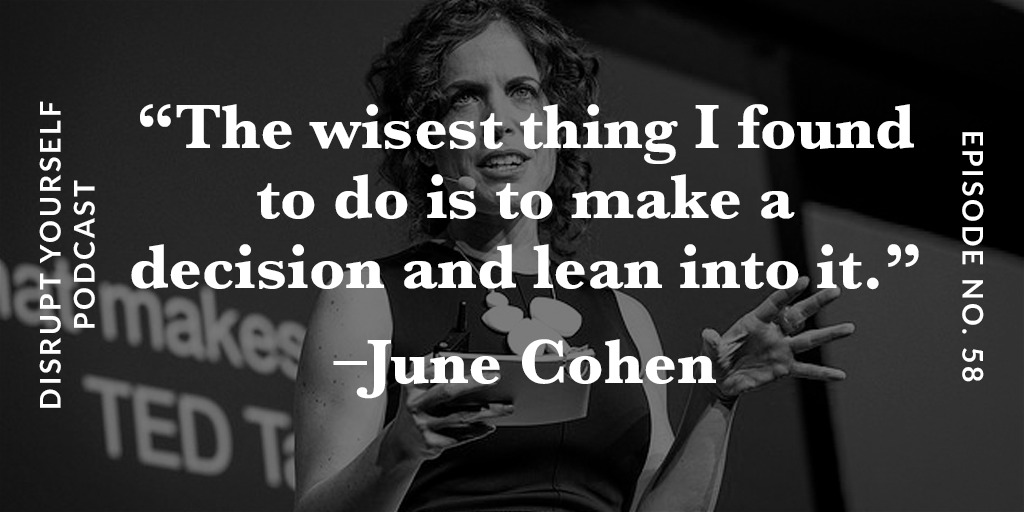 This emphasis on making a decision applies not only to her career and personal pursuits, but to her role as a leader. During her time as one of the earliest employees of TED Talks, she believed that if the company was brave enough to take the talks from a private, remote conference and broadcast them to the world, they would be able to find a niche audience that would embrace the messages being presented.

“I think it is fair to say that I did not talk to a single person that genuinely thought it was good idea…that the idea of putting taped lectures online was just not something that could ever succeed. But for me, I really believed in it. I believed in the talks, I believed…in how I felt when I was sitting in a room listening to these talks…and I believed that the feeling could be transferred to video.”

We know how this story plays out. June stuck with her decision, despite all the naysayers, and TED Talks have since become wildly successful, with some of the most popular videos garnering billions of views. After ten years at TED, June felt that her work was done. Decision time: what did she want to do with her life?

Join us as we discuss how June made that pivotal decision, the importance of gender balance in teams, and fighting for what you believe. Listen on iTunes or in the player below, and if you enjoy the show, please make sure you subscribe so you don't miss an episode.

Links in this Episode and Transcript

Masters of Scale with Reid Hoffman

Where Should We Begin? with Esther Perel

Masters of Scale: Imperfect is Perfect with Mark Zuckerberg, Founder & CEO of Facebook

Masters of Scale: How to Do Good – and Do Good Business with Howard Schultz, Chair and Former CEO of Starbucks

Masters of Scale: The Beauty of a Bad Idea (episode with Gospel choir)

Masters of Scale: Handcrafted with Brian Chesky, co-founder and CEO of Airbnb

Esther Perel: Rethinking Infidelity…A Talk for Anyone Who Has Ever Loved

Chimamanda Ngozi Adichie: The Danger of a Single Story

Brian Stevenson: We Need to Talk About an Injustice

Build an A-Team: Play to Their Strengths and Lead Them Up the Learning Curve by Whitney Johnson