Kara Goldin: There’s A Lot To Be Learned From Unbelievers

But that’s what Kara Goldin heard from many directions when she launched Hint, parent company of Hint Water, an unsweetened, all natural, fruit-flavor infused bottled water, with annual revenue in the range of $100 million. I’m sure her early critics would love to have a piece of that now. 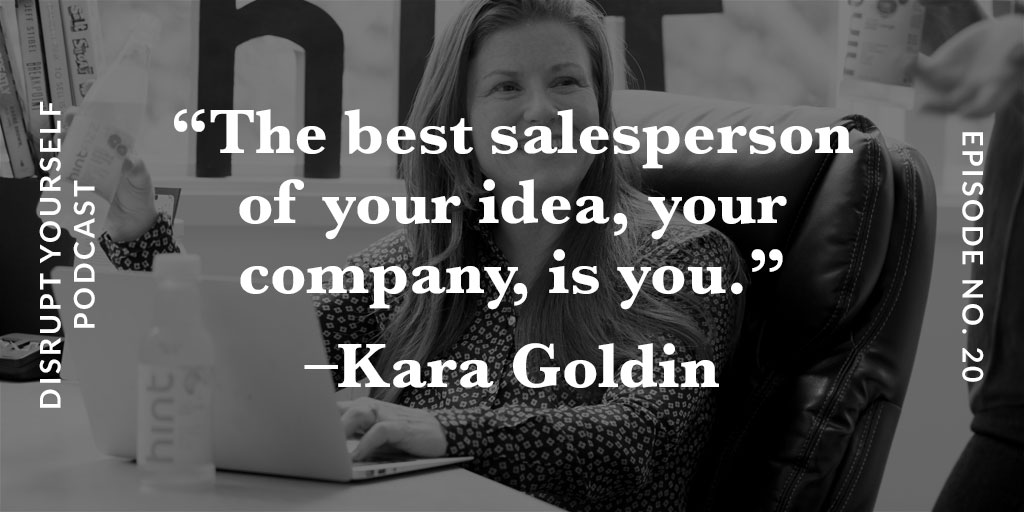 Kara, my guest on Episode 20 of the Disrupt Yourself Podcast, has advice for entrepreneurs who confront this unsupportive and seemingly unhelpful sentiment: there is a lot to be learned from the unbelievers. Here are a few of her thoughts on the subject:

“I can’t say it wasn’t hurtful along the way to hear the ‘No’s’ or meet with the naysayers and have negative energy around me….But I really always tried to understand where they were coming from when they were not agreeing with what I was seeing.”

A valuable insight for many situations, not just business.

Kara continues, “There’s always multiple thinking around any idea….There was a soda executive who had told me that he didn’t believe the world wanted or basically was interested in water and he believed that consumers really still loved sweet and therefore my product wouldn’t ever make it because it wasn’t.

“I really valued the time that I was spending with him, thinking, ‘Okay, I’m meeting with this person who’s with a major potential competitor, but also a soda executive who has lots of experience….I viewed it as ‘I’m going down one fork; he is going down the other fork and once I heard how he viewed the world, I thought, ‘I’d better go fast because he may turn around quickly and come down my fork.’

“I should have been afraid. I should have shut the whole business down…but instead, I looked at it as, ‘Okay, he’s been trained to think a certain way,’ and I almost felt sorry for him because he’d been living in this large, corporate behemoth company that I thought, ‘He doesn’t know any better. He can’t think differently about an idea.’”

A contrary viewpoint can be a real advantage to us, if we allow it to be. As can Kara’s epiphany—innovation happens, and the world is changed, by those who can think outside the traditional paradigm and envision what does not yet exist. By those who can think differently about an idea—those who know better than to ever believe that if it could’ve been done, it would’ve been done.

Get other great insights from successful entrepreneur, Kara Goldin by listening to the full episode below.