Karen S. Carter: Disrupting Herself for Over Two Decades in the Same Company

Karen S. Carter: Disrupting Herself for Over Two Decades in the Same Company

Sometimes the story is so good that I can’t resist a second helping.

This podcast is the second time that I’ve interviewed Karen S. Carter, a well-respected motivator and innovative leader who was one of 2014’s Forty Women To Watch Over 40, as well as in Forbes Magazine and The Huffington Post. We met while I was working on a writing project, and I was immediately struck not only by her grit and moxie but by her ability to disrupt herself—even while working for the same company for 23 years.

Her story resonated with me, and I think it will resonate with you, too.

What started as a summer internship to pay for college transformed into a two-decade long career path for Karen, who goes to work every day believing that her focus should be making a life rather than just making a living. The result? Six months ago Karen was asked to become the first Chief Inclusion Officer for Dow Chemical, a powerhouse company with over 50,000 employees worldwide.

This career change—the most recent of several roles Karen has filled for Dow, was completely unexpected. Karen had already earned her “dream job,” becoming the first female (and minority) North America Commercial Vice President for Packaging and Specialty Plastics in the history of the company. But looking out for others is in Karen’s DNA. Her father always emphasized the importance of making a difference, and never shied away from taking time to help others. He believed in people’s potential and his early death served to reinforce the value of time. When the CEO of Dow asked Karen to step into the newly created position of Chief Inclusion Officer she knew that she had to take the leap. 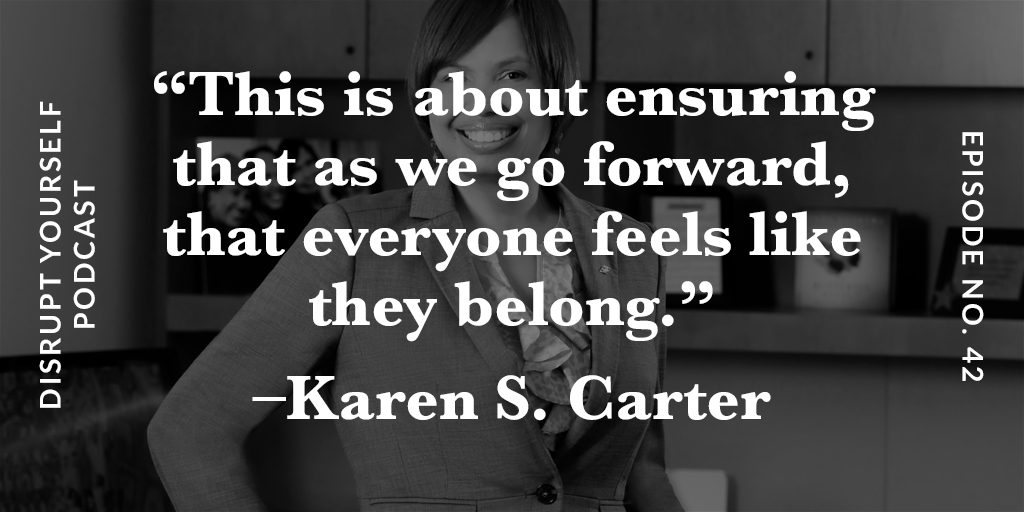 Karen was also blessed repeatedly with mentors at Dow who believed in her—who instilled in her a sense of belonging. Her very first boss, Stan Land, had high expectations of her and pushed her to succeed through “tough love,” but he also made sure that Karen knew that she belonged, and “don't let anyone tell you that you don't.””

This theme of belonging resonates throughout Karen’s story and passing it on to others is a responsibility she doesn’t take lightly.

“They asked me to do this because they had the audacity to think I can. This is about change management. This is about the culture of the enterprise. This is about ensuring that as we go forward, that everyone that walks through this door, regardless of their difference, that they do feel like they belong. And that is…significant—the magnitude of that responsibility is huge.”

Hear more of Karen’s story on the podcast in the player below, or by subscribing on iTunes.

Are you ready for an Inclusion Revolution? by Karen S. Carter