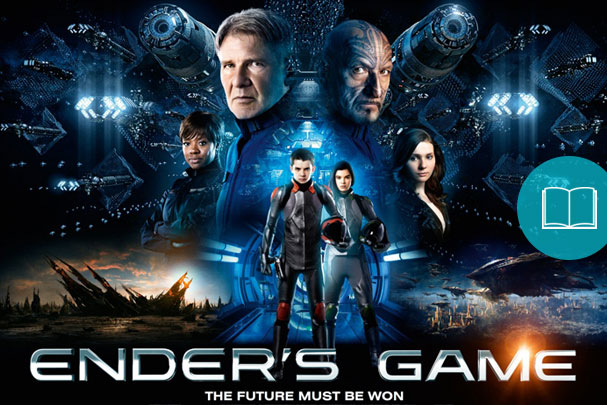 In the summer of 1996, I was a new mother. I felt more myself than ever. I also felt completely out of control. As an investment banker, I’d had more than my fair share of late nights. But now I was awake at 3am, rocking my son back to sleep, in our small apartment on 71 Street in Manhattan, trying to do something I had no idea how to do: be a mother. I needed an escape.

Why don’t you read Ender’s Game, suggested my husband, a sci-fi/fantasy aficionado.

War Games? Science Fiction? Uh, no thanks. Remember, I skipped over all the war in War and Peace.

Seventeen years later, this military science fiction novel by American author Orson Scott Card is one of my favorite books. In summary: As a hostile alien race is preparing to attack Earth for a third time, the best young minds are trained at a Battle School through increasingly difficult games including some in zero gravity. Shy, but strategically brilliant, Ender Wiggin is chosen to lead his fellow soldiers and save the human race.

Here’s why Ender changed me:

1. Ender is a disruptor – he plays war games in ways no one wants to play, or has thought of playing.

No army had ever fragmented itself like that before, but Ender was not planning to do anything that had been done before, either.

In 1996, my life and career were in transition. Not only had I just become a mother, I was in the process of making what many considered a backwards move from banking to equity research. I had no real playbook for either. Ender’s Game gave me courage to step into the unknown, and believe in disruption. A few years later, when I first read that disruption can be lonely and scary, because of Ender’s Battle School experience, I immediately understood.

2. Ender embraces his constraints – he doesn’t have enough friends, soldiers, time, or adult supervision. His limitations are a tool of creation.

Ender must believe that no matter what happens, no adult will ever, ever step in to help in any way. He must believe, to the core of his soul that he can only do what he and the other children work out for themselves. If he does not believe that, then he will never reach the peak of his abilities. – Colonel Graff, Ender’s commanding officer

As I have navigated my career, I have believed that not having the right pedigree or the right chromosomes hampered my success. Ender’s Game led to a reframe. The lack of a business degree pushed me to rely on my liberal arts training, which became a distinctive strength. A degree from a private religious college rather than the Ivy League drove me to work even harder, taking nothing for granted, in order to prove myself. As a woman I came to understand that being left out of the existing power structure, and on occasion being invisible, could accrue to my benefit, as it had Ender.

3. Ender is an archetype of what we all need in order to fully grow up.

In the moment when I truly understand my enemy, well enough to defeat him, then in that very moment I love him. – Ender Wiggin

In 1996, I hadn’t yet come upon Jungian psychologist Robert Johnson’s premise that a healthy adult psyche is made up of masculine and feminine. Or that to be a complete person we must develop both side of the psyche, to learn to handle power and to love. But as I was trying to figure out the feminine in a whole new way through motherhood, and how to wield power on Wall Street, I was taken with the idea of Ender, the youngest of three siblings. His older brother Peter was smarter, but lusted for power, unmediated by love. Equally smart Valentine was engulfed by empathy, to the point of losing herself. Ender was chosen because he embodied the perfect balance of power and love, overcoming the classic “tragic flaws” of his siblings.

The pages of my copy of Ender's Game are dog-eared, with scribbles in the margins, a cherished friend. My 17 year-old son has read the book several times (and fittingly loves the multiplayer online video game League of Legends): a great escape with a lonely, brilliant, incorruptible and compassionate leader. Ender kept me company through the infancy of my first child and my plunge into new motherhood. He was also there at the birth of my career-making move into equity research. And once I learned about disruption, Ender became the archetype disruptor, the kind of leader I want to be when I grow up.