LinkedIn | My First Job: Hire the Job to Do a Job for You 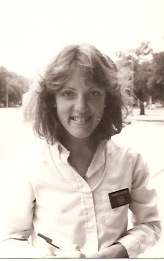 Ask me about my first job, and instinctively I will share the story of how I moved to New York with my husband after graduation and decided I wanted to work on Wall Street because we were in New York. As a music major, I’d never set foot in an accounting, finance or any type of business course, so I started as a secretary. With a lot of hard work, and a little luck, I eventually had a Working Girl moment, and moved up the food chain from secretary to investment banker to equity analyst, and eventually co-founded a boutique investment firm with Harvard’sClayton Christensen.

It's a good story, but it wasn't actually my first job.

I started babysitting when I was twelve. During high school I worked at Burger Pit, then waitressed at Sambo’s, both in Los Gatos. After my first year of college, my parents told me they were out of money, so I took a year off and worked as a Girl Friday at an early Silicon Valley company, disk drive company Priam. Then I spent eighteen months as a Mormon missionary in Uruguay, and following that experience, I worked part-time teaching Spanish at the Missionary/Language Training Center in Provo, Utah and worked at the Orem, Utah Public Library for a year.

Why then when someone asks me what I learned from my first job do I reflexively jump to my New York experience?

To be sure, it’s more exciting to talk about Wall Street than Burger Pit. Until I graduated, the point of all my jobs was simply to pay my tuition, to survive. That all changed with my first job in New York; perhaps because I was no longer in school, or distracted by singleness, or simply because it was Wall Street. Perhaps it’s because my work as a secretary on Wall Street was the first job I had that was about learning something. In fact, I was so hungry to learn, I would have paid to be there.

When we talk about a job, we think about the work that we do for someone else. But when we are hired to do a job, we are simultaneously hiring the job to do a job for us, from the functional (I want to earn money!), to the emotional (I want to feel good about what I am doing!), to the social (I like who I work with and I like talking about where I work!).

I enjoyed working at the library, being surrounded by people who curated books and music for a living. Teaching Spanish to missionaries was similarly satisfying, a soft landing after my 18 months of volunteer service abroad. And Priam was fast-paced, but my job was to deliver the mail and answer the phone. (I do wonder though, if I’d been a young man if maybe the engineer twice my age who wanted to marry me, would have instead mentored me—but I digress). As a practical matter, the only job that I’d hired all of these jobs to do was to fund my education – to make it possible for me to scale the curve of a college degree. I couldn’t do that without money. Any emotional or social benefit derived from these work experiences was secondary.

In New York, I started out with a largely functional mindset. My husband was in graduate school, and I needed to support us. But as I sat across the bullpen watching the ‘aspiring masters of the universe,’ I wanted in on the Wall Street game. And what I wanted my job to do for me flipped. Sure, I still wanted and needed to earn money. But for the first time, a job wasn’t just about making enough money to get a college degree: the curve I wanted to scale was my career. I wanted my work to do the emotional job of allowing me to learn, to be challenged.

As for the social job, I couldn’t really admit this to myself, but I wanted to be a master of the universe. I wanted power and influence as well as money. And this is not what women in my demographic did. I thought I would work until I got pregnant and then stay home with my children. I didn't do that.

I now had a steep learning curve to scale in order to do the job I aspired to, and I loved the challenge and the reward of gaining that knowledge. But the biggest lesson for me from this ‘first job' was the discovery that work wasn’t just aboutfinancing a dream, such as college, a mission, or a house or a certain lifestyle. I realized that I could dream for a living. Dreaming has made the difference between having a job and having a career.