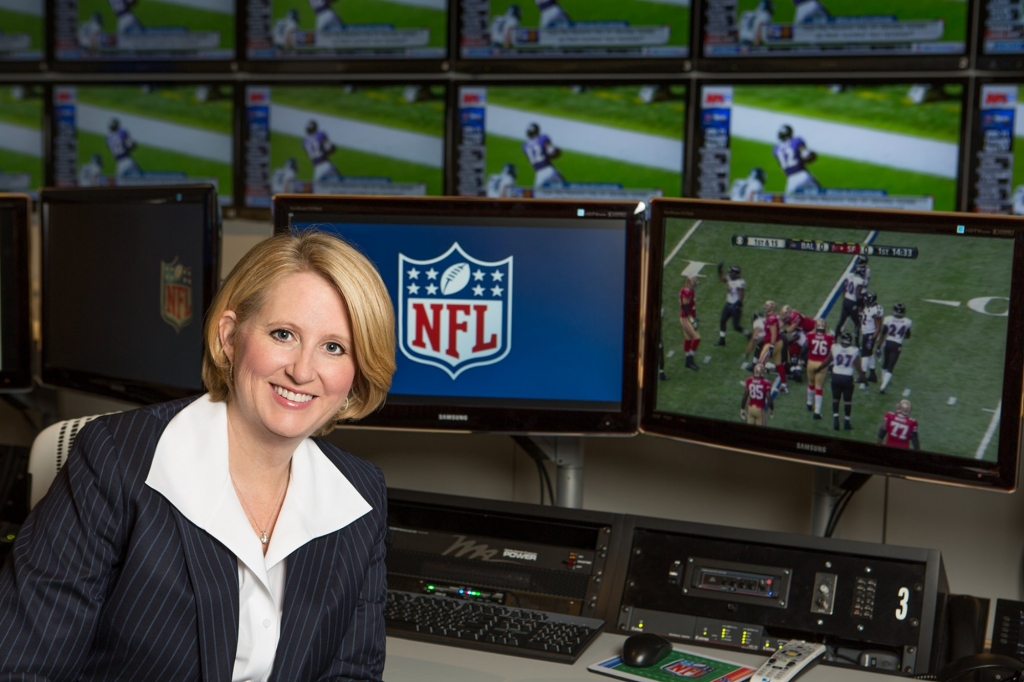 I’m thrilled to announce the debut of the Disrupt Yourself Podcast, a project I’ve been disrupting myself with these past few months.

Our first episode features a conversation with the Chief Information Officer of the NFL, Michelle McKenna-Doyle. She’s the first person to do the job because the title didn’t exist at the NFL before she arrived in 2012. (You have to hear how she used her interview to pitch her future boss, Roger Goodell, on the new approach.)

It’s Michelle’s job to dig into the NFL’s data and coordinate across departments to improve how football fans experience the game — and even how the game itself is played. Football fans are some of the most passionate in sports, so she’s never short on feedback. A healthy obsession with competition and a creative approach to problem solving make her one of the top disruptors in sports.

Here are some excerpts from our interview that didn't actually make it into the podcast:

Q. Who has been your best boss?

The best boss I had was at Disney, his name is Al Wise, he was President of the Theme Parks Division; he went on to be Chairman of Theme Parks. He’s since retired. He always heard me out even if he disagreed, or he already had the answer.​​ He'd use it as a teaching moment. At the time I used to think, ‘Man, he’s really hard on me, like, I have to go in so prepared,’ even if he already knew the answer. I realize now he wanted me to know how he knew the answer. He took that much time with me​. He also advocated for me. I could just dump it all out there, and he didn't try to solve it. He would just listen, and them help me figure out how to solve it. So he’s the best boss.

​Q. What are you like as a developer of talent?

​There's one person that I've spent a lot of time with at the NFL​. He’s one of the smartest, most talented people I’ve ever worked with. He used to work on the help desk and now he's ​running infrastructure. I’m​ ​very, very proud of him.

​Actually, I would say my proudest accomplishment at the NFL is that, in general, there there was a lot of talent

[when I arrived four years ago], but they were struggling. It wasn’t cause they weren’t talented. They weren’t necessarily slotted to their strengths, so I really did a deep analysis on each individual, talked to them a lot, and then I switched them into different seats. One guy was doing telephone stuff and now he’s running information security because he has an auditor’s mind.

Then ​​I had this guy that had responsibility for all systems, but he could create products and build something that didn’t exist. And so it was like, ‘I’m weighing you down, having you run…be responsible for like the payroll system. ​He’s the one who came up with how we make tablets work on the sidelines. We’re putting in a new communications system for this season that our coaches use to talk to each other. There’s nothing in the marketplace; you couldn’t go buy it. How many people need that kind of stuff? So he created it. So I shifted him; took away responsibility from him. At first, he didn’t like it, because he felt like his job was shrinking. I was, ‘Ah, just trust me, you’re gonna be happier…’

T​hat’s how I do it—putting people in the jobs that they’re naturally talented for. And then making the hard calls. If there’s someone in the organization that’s really kind of cancerous, like they just are negative Nelly, and constantly undermining everybody else’s desire to try to have a healthy, happy workplace then they have to go. There’s just no room on my team for that, so I’ll make that call too and I had a few of those people that had to go.

Q. What's it like to be on the receiving end of feedback?

I’ve never worked anywhere where people are so passionate, from coaches to fans. So, with coaches, when we give them systems that they say they want, you have to be willing to have it like thrown at you, or you know, screamed at, or, because they’re just so…in the heat of the moment if that thing doesn’t work, you know, they’re throwing that piece of equipment down; they’ll step on it….

The fans are the most amazing. Roger’s voicemail on a Monday or a Tuesday, we actually have to screen, and we have like a transcribed, because, whoo, some of the things that get said….His assistant was like, ‘I don’t think I can take another fan cursing about this call or this, you know, what constitutes a catch.’ What’s awesome though, and the reason….I don’t know if you watch the draft, but when Roger walks out on the stage there’s a massive amount of booing that goes on, and he has to stand there and take all that booing, and then, you know, make the play. The same people that are booing are queuing to take their picture with him, and he’s like, ‘You know what’s great? It’s that they care enough to boo that loud.’ I mean where else do you get that kind of immediate feedback, good and bad? It makes it fun place to work.

You can listen to the teaser and first episode on:

Make sure to hit ‘Subscribe’ to receive new episodes as they roll out in the coming weeks. Full details are available at disruptyourselfpodcast.com

One of the things I’m most excited about as my conversations with disruptors rollout on the Disrupt Yourself Podcast is the increased ability to connect with you. I love having all kinds of conversations about disruption as I travel, speak and write. This podcast gives us a chance to further explore the power of disruption. So listen to the first episode and then comment here, send me a tweet or a note. I will make it a priority to reply.