LinkedIn | Personal Disruption: 14 Role Models + 7 Books to Get You Started 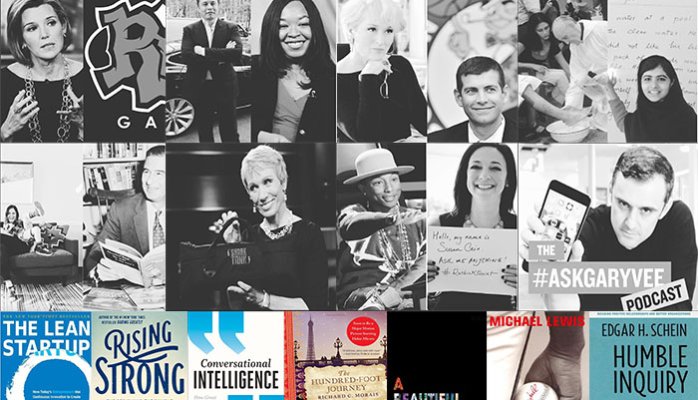 Personal Disruption (n.): The act of using a practice employed by companies — wherein a product deemed inferior by the market leader (Amazon v. Borders, Uber v. Yellow Cab) eventually upends the industry — and applying it to yourself and your career.

If you want success as an organization or individual, you'll surf the S-curve waves of your own disruption.  There are seven variables which, if applied, can help you master these curves of learning.  To get you started, below are  individuals/organizations that exemplify, even embody, these variables or traits:

1.  Take the right kinds of risk. As in, play where no one else is playing. While it seems obvious, it’s actually hard to do. It feels safer to play where everyone else is, but when you muster the courage to play where others don’t want to (taking opportunities that seem boring or pedestrian), or haven’t thought of playing (downright ridiculous), the theory of disruption suggests you’re more likely to be successful.

Consider these icons: Gary Vaynerchuk, a Russian émigré, started selling wine on-line twenty years ago.  His willingness to play where others weren't, a decidedly low brow move, allowed him to upend the spirits industry. He’s now looking to change the game for media.

Then there’s Barbara Corcoran. You may know her from Shark Tank, but she made her fortune in New York real estate.  It was a crowded market, but when she started to play where others hadn't thought of playing by issuing a monthly statistical report about residential housing prices, it was a game-changer.

When you make the decision to start something new, specialize in such a way that there is no one else doing the job.

Ask yourself, do you have a knack for identifying where others aren’t playing and you are willing to go there?

To read more about taking the right kinds of risks, check out Richie Norton’s The Power of Starting Something Stupid.

Play to your distinctive strengths. What do you do well others in your sphere do not?  When you play to your unique strengths you can walk through the door of opportunity presented by an unmet need.

Susan Cain, the author of Quiet: The Power of Introverts in a World that Can't Stop Talking—one of the most successful books of 2012—started a workplace revolution by playing to her distinctive strength of being an introvert in a world that tends to value extroversion.  Or, what about Pharrell Williams? On the popular talent show The Voice, where all the mentors/judges are gifted vocalists and recording artists, Pharrell Williams’ sets himself apart by offering up his expertise as a producer, as well as his sensibility of having grown up in ‘the church.’

When you are trying something new, examine the competencies you’ve acquired, and then focus on what you can do that others cannot. Pair that with an unmet need, and you’ll move more quickly up your learning curve.

Do you know what your distinctive strengths are?  Do you use them in your current roles?

Embrace Constraints. We think we like to have unfettered freedom with a new challenge.  But nothing stalls our progress more quickly than too much freedom. In fact, one of the best ways to get feedback as to how we are doing is to impose constraints.

Susan Petersen, the founder of Freshly Picked, which makes baby moccasins, knows how to embrace constraints. She started her business by recycling old aluminum window frames for cash. With that cash she bought scrap leather to make moccasins. Today she has over $5 million in sales. And don’t forget Dr. Seuss.  He reinvented children’s literature because he was willing to work with a 225-word constraint.  For an innovator, constraints aren’t a check on absolute freedom, but a tool of creation.

Do you find yourself to be especially resourceful, able to turn what appears to be nothing into something?

For more on turning constraints into a tool of creation, read Adam Morgan and Mark Barden’s A Beautiful Constraint.

Battle Entitlement (aka, the belief that I exist, therefore, I deserve).  As we begin to see the fruits of taking the right risks and playing to our distinctive strengths, it’s easy to start to believe that we deserve what we have. Which means right at the moment when we need to think about surfing a new wave, we get complacent and miss out on a new learning curve.

Two people that vigorously battle entitlement are Pope Francis, arguably one of the most powerful men in the world, and Nobel Prize-winner Malala Yousafzai, the Pakistani schoolgirl who stood up to the Taliban and defended her right to an education. Rather than settling into the fame and fortune of their current curve, they are relentless in using their powerful perches to pull others along.

We all want to be the agents of change, but the best way to become an agent, is to be the subject.

How can you battle entitlement so as to move more quickly up your learning curve?

One antidote to battling entitlement is doing the hard work of getting buy-in for your ideas.  On this score, consider Dr. Judith Glaser’s Conversational Intelligence.

Step Back to Grow. Sometimes the only way up is down. Disruption by definition involves moving sideways, backwards, or down, with all the negative connotations, this conjures to move forward. But moving backwards in the context of disruption is a calculated risk.

Like when Meryl Streep stepped back into a supporting actress role in Adaptation (2002) and introduced the element of surprise into her acting.  She's since starred in and been nominated for Academy Awards in films, ranging from The Devil Wears Prada to Julie and Julia to Into the Woods.

Or when Brad Stevens quit his day job at Eli Lilly to become a volunteer in Butler University’s basketball office. This backward move positioned him such that he could eventually intersect with his goal of becoming a basketball coach.  He went on to become the head coach at Butler, taking his team to the Final Four two consecutive years.  Today’s he’s the head coach for the Boston Celtics.

Bonus: One of the biggest steps back people take, especially women, is the decision to become a parent.  It is no doubt, a step back for a career, but for a life, it’s an unprecedented opportunity for growth. Christy Turlington used this personal growth to become a champion for women and children worldwide.

How could going back help you slingshot forward?

To think more deeply about stepping back from our ego, read Edgar Schein’sHumble Inquiry.  Bonus:   To get the right metrics along your curve, read Michael Lewis’s Moneyball.

Give Failure its Due. Intellectually we know that failure is part of the process of iterating and moving up a learning curve. But we all are ashamed of failure, whether we admit it or not.  And more often than not, when we say let’s celebrate failure, that’s code for, “Celebrate my failures. I'll consider celebrating yours.”

One of the best ways for us to give failure its due is to talk about it.  One person that has done this well is Sallie Krawcheck, owner of Ellevate, and former president of the Global Wealth and Investment Management Division of Bank of America, who has been fired twice. Riot Games, creator of the popular online game League of Legends, has chosen to address its failures by communicating directly with its users and using humor, often of a self-deprecating variety. By not taking itself too seriously, Riot has generated fan empathy and fidelity.

Are you less ashamed of your failures today than you were a year ago?  Are you more willing to let others fail?

If you want to dive more deeply into the topic of giving failure its due, read Brene Brown’s Rising Strong.

Be Driven by Discovery. When you’re innovating, or making change, you can’t see the top of the curve from the bottom of the curve because you’re searching for a yet to be defined market (that place where others hadn’t thought of playing). So, sure you go ahead and make conventional checklists.  They help in the short-term, if nothing else, they alleviate stress, just ask me, a compulsive list maker.  Then be willing to take a step forward.  Gather feedback.  Adapt.

Two people that do this remarkably well are Shonda Rhimes, founder of production company Shondaland which produces Scandal, How to Get Away with Murder, and Grey’s Anatomy, and Elon Musk, CEO and CTO of SpaceX, CEO and product architect of Tesla Motors, and chairman of SolarCity. Shonda spent an entire year saying ‘yes’ to opportunities and being willing to discover what’s next. The result? Hit TV shows with cult followings. Elon discovers continually—even in space. What he discovers changes but not the why.

Get clear on your ‘why' but let your your checklists, your ‘how' be free to flex.

How could you be a little more driven by discovery?

For more on pursuing a discovery-driven process, see Eric Ries’s The Lean Start-Up.

As you read about these individuals/organizations, consider which variables you already embody. If you found yourself especially drawn to one, in particular, you probably already own it, at least a bit, as we tend to like in others what we ourselves already possess. If, for example, you gravitated to Shonda Rhimes, it may be that you are already pretty good at being discovery-driven. This may be a strength.  Play to it. You'll move faster along your personal S-curve.

Finally, if you're curious about where others are in their own journey of personal disruption, take this quiz.  I'll share the findings in my newsletter in the coming weeks.

Whitney Johnson is the leading thinker on driving innovation through personal disruption and has been named one of the top thinkers on Talent by Thinkers50. She is a former award-winning Wall Street equity analyst and the co-founder of a boutique investment firm with Clayton Christensen. Johnson is the author ofDisrupt Yourself: Putting the Power of Disruptive Innovation to Work (Bibliomotion: 2015).