LinkedIn | What Inspires Me: Personal Disruption Will Make You Play Where No One Else Plays 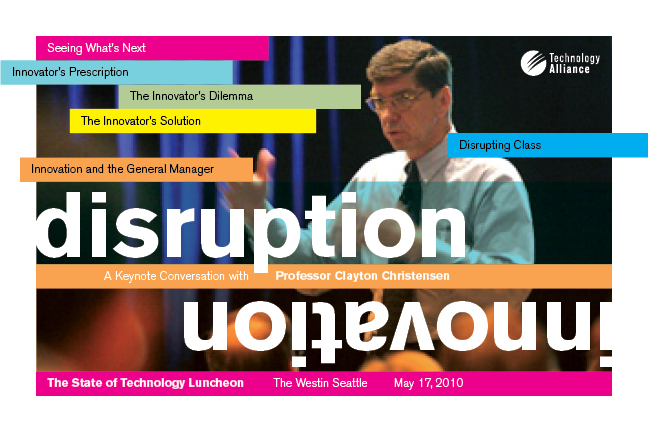 When someone asks “Who most inspires you?” Shark Tank's Barbara Corcorantypically comes to mind. I also have deep admiration for the now-deceased Katharine Graham, former owner and publisher of the Washington Post. Hands down though, the person who has most influenced my career is Harvard Business School professor Clayton Christensen, author of The Innovator's Dilemma.

In 2003, I discovered Christensen's theory of disruptive innovation. As a sell-side analyst at Merrill Lynch covering telecom and media in the emerging markets, I immediately recognized that this theory explained why mobile penetration was repeatedly beating expectations: mobile was disrupting fixed line telephony.

The more familiar I became with these frameworks, I suspected they weren’t just applicable to industry, but also to individuals — to me, in particular. I had now been an Institutional Investor-ranked sell-side analyst for nearly a decade, and was at the top of my game. But I was also ready to do something more, to make a dent in the universe. According to the theory, if I stayed at Merrill Lynch that wasn’t going to happen. To upend my status quo, I would need to play where no one else was playing.

Within a few months, I quit my job to become an entrepreneur. Many questioned my sanity. Getting to this place of power and respect was hard-won. I’d started out as a secretary and was now an award-winning analyst. Why would I walk away? This seemingly wanton – but ultimately satisfying move – does make sense within the framework of disruption, especially personal disruption. Compensation is more than financial; psychological and social factors also matter. Because I was now living in Boston, after working on several volunteer projects with Christensen from 2003-2006, he invited me to join him as a co-founder of the boutique investment firm Rose Park Advisors in 2007.

In addition to my thinking being shaped by his groundbreaking theories, I have been inspired by Clay Christensen, the man. I've watched him teach, interact with investors, academics, dignitaries. I've been astonished at his resolve to beat a heart attack, cancer, and stroke, into submission. The below excerpt from an introduction I made during a scholarship fundraiser at the Celtic Training facility encapsulates what I've learned:

According to the Financial Times, Dr. Clayton M. Christensen, the Kim B. Clark professor at the Harvard Business School, is the world’s leading thinker on innovation. His seminal book, The Innovator’s Dilemma, which first outlined the disruptive innovation frameworks, received the Global Business Book Award for the Best Business Book of the Year in 1997, was a New York Times bestseller, has been translated into over 10 languages, and is sold in over 25 countries. He is also a five-time recipient of the McKinsey Award for the Harvard Business Review’s best article and received a Lifetime Achievement Award from the Tribeca Film Festival in 2010.

Impressive as his credentials are, Clay Christensen would tell you — these are not the performance attributes that matter most.

Forty years ago, 18 year-old Clayton arrived at BYU Provo determined, as he tells it, “to get the best education he could.” It turns out Dr. Charles Tate wanted this young man to BE his best. As Clayton recounted in a 2003 BYU Forum address, he went into Dr. Tate’s English 316 class thinking he wrote pretty well. He’d been his high school student body president, a star basketball player, accepted to Harvard and Yale.

According to Christensen’s theory of disruptive innovation, a body of work about which I have personally seen captains of industry and heads of state beat a path to his door—a silly, crummy, David-like, start-up can eventually topple a Goliath-like incumbent. For the Goliath, the decision to be made is die, or die sooner.

One place in society where the incumbent doesn’t typically face this dilemma is in academia. The student begins the scholarly journey knowing far less than the professor. If the student puts her nose to the grindstone, and the teacher does likewise, the student’s trajectory will eventually intersect with the demands of the market. Perhaps even the student can meet those demands better than the professor. Rather than ruing this day, a master teacher rejoices. This is what Dr. Tate did for young Clayton, and what Professor Christensen has since done for thousands upon thousands of students.

He’s been dubbed one of the world’s best business school professors, a masterful, and spellbinding teacher, and Professor of the Year at Harvard Business School in 2010. In accepting this honor, he delivered his speech “How Will you Measure your Life?”, a book that may well sell even more than The Innovator’s Dilemma. All because he says to his students and proteges, I think you can become a good writer, investor, human being. So he pushes us.

Clayton Christensen's ideas have transformed my approach to investing and business strategy; his ideals have inspired me personally.

Enough for a lifetime.