177. Livingston Taylor: Stories from the Stage

Our guest this week, Livingston Taylor, is a singer, songwriter, guitarist, pianist, performer, recording artist and teacher. He has enjoyed a storied career that has spanned five decades. Livingston has shared the stage with Joni Mitchell, Jimmy Buffett, Linda Ronstadt and his sister and brothers who are all musicians. Having spent 50 years understanding and perfecting the art of performance, Livingston has documented his learnings in the renowned book “Stage Performance: Stay lean and simple. Tell the Story.”

In this episode of the Disrupt Yourself podcast, Livingston shares insights into family, life, love, teaching and the art of performance. We learn why Livingston prefers the periphery of the limelight and discover the melodic connections between speaking cadence and song structure.

As a special treat, Livingston teaches us the importance of tone through the gift of song.

Livingston's 50th year of making music was celebrated by Boston Mayor Marty Walsh and Massachusetts Governor Charlie Baker, both declaring January 18, 2017 “Livingston Taylor Day”. A documentary film entitled “Livingston Taylor: Life is Good” was released in 2018 at national and international film festivals. It has garnered many awards, nominations, and accolades, including The Van Gogh Award for the Feature Documentary category at the Amsterdam International Film Festival. 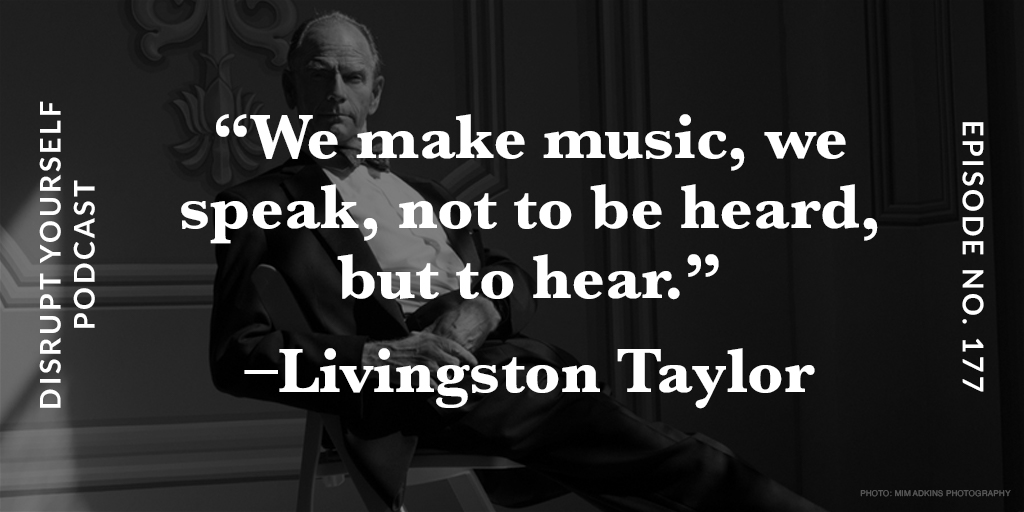 We are grateful to have Livingston with us and trust that you will enjoy this interview as much as we did.