The following post is an excerpt from a book titled Letting the Upside In by Lori Cash Richards, one of my dear friends from when I first arrived in New York.  It is a beautiful story.

On October 13, 2012, when I was silently drawn by the strange pull that I had to see the Endeavor before she reached the California Science Center, I trusted what resonated, got in the car and drove all over Los Angeles until I found her, the space shuttle to which I was naturally and organically drawn.

I sit beside her today in her hangar as I write this.

I found her that night in October on Crenshaw Boulevard in Inglewood. I was one of 1.5 million people who had gathered, lining both sides of the street, to honor her proud and final journey. And now, while she rests after 19 years and 123 million miles of flight missions, I sit next to her, learning from her, celebrating her 25 trips around the earth, honoring her contribution and her service.

I found her that night in October on Crenshaw Boulevard in Inglewood. I was one of 1.5 million people who had gathered, lining both sides of the street, to honor her proud and final journey. And now, while she rests after 19 years and 123 million miles of flight missions, I sit next to her, learning from her, celebrating her 25 trips around the earth, honoring her contribution and her service. 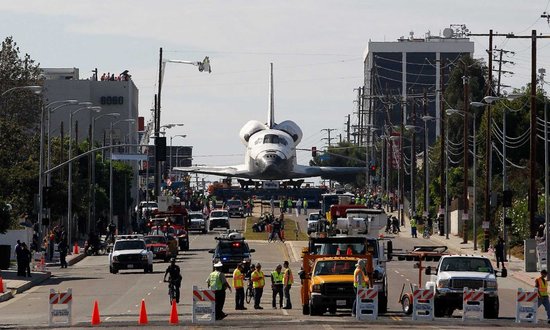 She brings tears to my eyes every time I see her. Perhaps because, while looking through the lens of spiritual consciousness, I see that she is an outer expression of the inner genius of those who created her. She represents each one of us, reflecting back to us the mastery of our own engineering and the genius of the engineer who created us.

What I'm thinking about, as I sit beside her, is the incredible heat she experienced while traveling, while doing what she was built to do. I read that the hottest part of any space shuttle's journey is not the launch. The hottest part is the entry back into Earth's atmosphere. Returning home heats up the wings to about 3000 degrees Fahrenheit.

Through a small hole in her side, she welcomed humans into her inner space so we could explore outer space. With incredible heat outside and a steady, livable environment inside, she served as a container of the human spirit, literally. So do we, as humans. We are, each one of us, containers of the human spirit.

As women, we also contain for 9 months the spirits of the children who are born through us. For 27 months cumulatively, I was the container for the spirits of my three daughters (McCall, Madison and Hadley), their space shuttle so to speak, their mother ship.

It turns out that I, like the Endeavor, am able to withstand incredible heat, 12 months of debilitating nausea over the course of three pregnancies (16 weeks each). As my girls entered Earth's atmosphere, like the Endeavor, I didn't fall apart. I welcomed those souls into my inner space so they could explore this earth, this outer space, on their own, as containers of their own spirits. 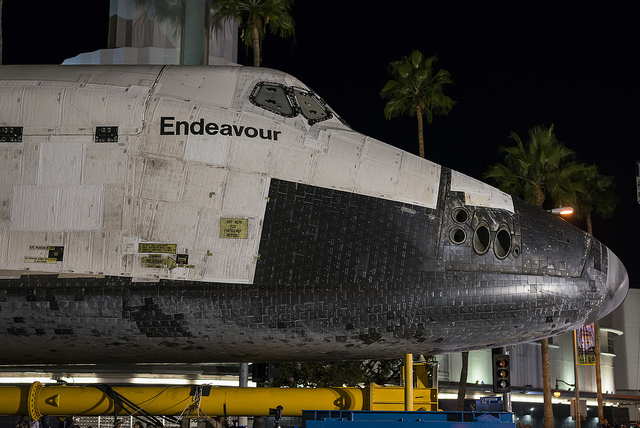 Fear comes up inside me sometimes, casting doubt about what I'm doing by saying things like, “Who do you think you are, writing this?! Maybe someone else could do it better.”

So I sit by my new neighbor now, experiencing for myself the unique blend of curiosity and freedom she generates. She sees herself only through our eyes. She has no purpose other than to carry us where we want to go, to heights to which we could not ascend without her.

Imagine the collective intelligence of all those astronauts she contained– pilots, doctors, engineers, teachers, astronomers, geologists and on and on. Like the Endeavor, we, too, carry incredible intelligence and wisdom within.

Her main purpose may not have been to transport people or things into space, although that's what she did for many years. Her main purpose, as I sit here beside her, seems to be to inspire us. Although she will not travel into microgravity again, she showed us what's possible, encouraging us to go everywhere, inspiring us to go beyond the borders of our perceived limitations.

One million five hundred thousand people came out of their homes, lining the streets of the route she took to her final resting place in the California Science Center. I was one of them who came to show her my deep respect and appreciation, one in a gauntlet of admirers who stood to welcome her home.

Why? Why did we line the streets? 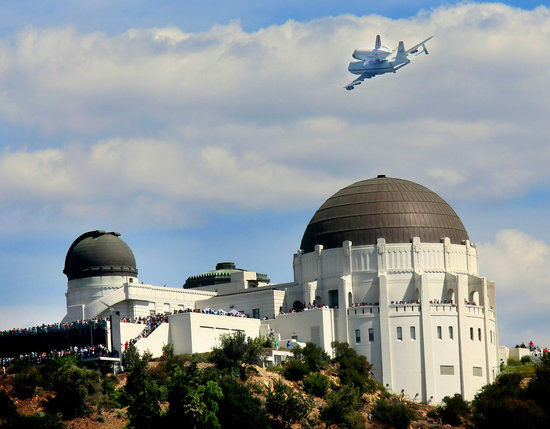 She had flown on the back of a specially modified 747 a few days before. We came out of our homes to watch her fly above us one last time, too. Then we honored her, honored what she represented in us, by standing beside her, grounded for good, anchored to the earth's gravity now, like us. Perhaps ultimately, we lined the streets to honor her contribution and her service. She served us, taking us where we could never have gone without her.

The Endeavor never apologizes for being big, strong, resilient, powerful, designed to serve. After all her missions (300 miles above the earth) beauty remains. With durable, determined willingness, she carried her precious cargo, relating to them by taking them where they wanted to go in love, an impersonal kind of love, a very big, expansive kind of love. An unconditional love, where she didn't seem to care who got on board, where they were from or what they did for a living. She held each who entered without condition in the safety of her masterfully assembled parts.

Her love may look the same as indifference, but it isn't. She was one with those astronauts, in their world but not of their world. Able to withstand incredible heat, she remained a safe place, a secure environment for those on board, an unconditionally nurturing space ship pregnant with precious cargo on her voyages. 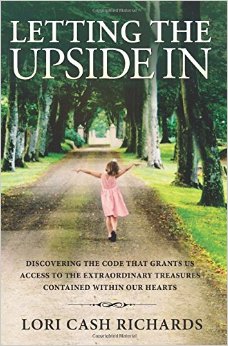 I love that the Endeavor flew on the back of a modified 747 on her final flight home to California. After completing 123 million miles worth of missions, she let someone else carry her home. There's a beautiful discipline in this, a gentle wisdom in knowing when to use her own power and knowing when to let another carry her. She allowed that 747 to serve her as she has served.

She has taught me much, this mother ship who in her way loves fiercely and impersonally, holding her precious cargo for a time then letting them go in love. She brought a steady grace and a way of loving without condition to this human experience.

So following the strange pull of what I love, that October evening, did not lead me astray. I found the Endeavor sitting for the last time beneath the massive moonlit sky waiting patiently to be taken the rest of the way home.

Here's how Lori describes herself:
As a Soul-Centered Professional Life Coach, my clients work with me to experience themselves as they truly are – loving, creative, peaceful, joyful, beautiful and compassionate souls having a human experience. As we work together inside the spiritual context, their inner and outer lives transform and get a whole lot more gorgeous. I assist my clients in stepping fearlessly into their authentic greatness by aligning with the values of their hearts and co-creating any future they dare to imagine. Together, we maximize their personal and professional potential through meaningful conversation, action and completion. You can contact her at www.loricashrichards.com