Today's episode is a rebroadcast of an episode we aired back in 2017 with speaker and New York Times bestselling author Luvvie Ajayi Jones.

“My friend Maud once said, ‘There are times when we must speak, not because you are going to change the other person, but because if you don't speak, they have changed you.' Silence doesn't change the world. It changes us.”

I don’t want to be silent, but I’m not yet sure what to say. But what I’ve learned from Luvvie, is that when you don’t know what to say, you pass the mic.

That's why we decided instead of airing the episode we had scheduled today that it was important to re-air this episode. Several people shared with me on social media that it was this conversation that started them thinking differently about privilege, and that is a good place to start when it comes to seeing others as people and not objects.

(Quotes and links from the original post are below.)

Privilege. What is it really, who has it and who does not?

This was a subject I explored with Disrupt Yourself Podcast guest Luvvie Ajayi. Ajayi is a renowned blogger, social critic and pop culture aficionado who makes her voice heard for good on her Awesomely Luvvie website—and elsewhere.

The topic of privilege is especially interesting to me because it so closely mirrors the problem of entitlement. Recognizing our privilege and the ways in which it might lead to feelings of entitlement is an important part of successful personal disruption.

Ajayi is an African American woman; she is an immigrant from Nigeria. She is unafraid of being an outspoken witness to societal problems and injustice. I took advantage of the opportunity to have her weigh in on the subject of privilege. Here are some of her insights from our conversation:

“Why do we hear ‘privileged’ and feel like it means that [people] haven’t worked for anything they’ve gotten?” People do earn things, after all. “I always want to get people to switch that idea—that privilege is more of the things that we have or that we were born with that we have nothing to do with.” 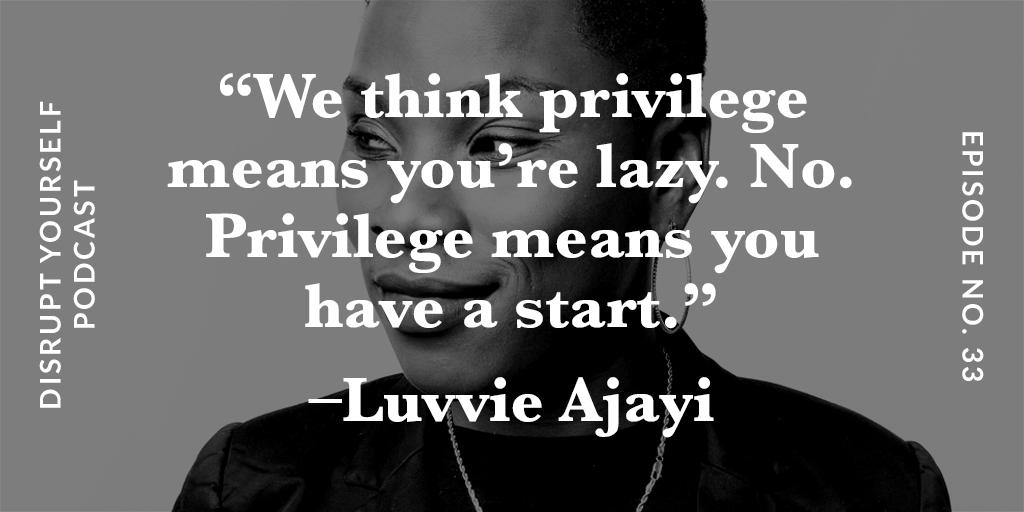 She describes exercises she did in university classes, when she was a peer counselor at the University of Illinois – Champaign/Urbana. The outcome of these exercises could be surprising.

“Some of my white classmates were behind me….I have class privilege because I’ve never been poor. I’m Christian, I am straight, I am able-bodied, I am educated.”

I typically think of privilege as being determined by big identifiers like race or gender. While those are definitely in the mix in large ways, as Ajayi described privilege I became aware that it can be much more nuanced. She reminded me that there’s a difference between having things we’ve earned—not privilege—and having things we haven’t done anything to deserve.

“Privilege means you have a start…You are in a starting line that you didn’t even walk to, to get there. You got there because of something you had nothing to do with. When we talk about white privilege, a lot of people who are white are also straight, are also able-bodied, they’re also Christian—they are walking with so much power and get a lot of opportunities and they take credit for it as a personal thing.”

And that’s when privilege morphs into entitlement. As always, there’s more to learn on the podcast.