Marisa Thalberg: The Power of Connection

My guest today is Marisa Thalberg, Chief Marketing Officer of Taco Bell, founder of ExecutiveMoms.com, and listed as one of the top 25 Most Influential CMOs in the World by Forbes.

Takeaways from this Episode:

The idea of “playing where no one is playing” appears to be second nature to Marisa. While a student at Brown University, Marisa actively sought out development opportunities, even going so far as to call up New York City communication companies to tell them that she wanted an internship. By graduation, Marisa had cultivated a resume interesting enough that she was noticed by the marketing agency Saatchi & Saatchi.

Years later, when Marisa became a mother, she sought out a working mothers group in New York City…only to find that there wasn’t one. So, she created her own—ExecutiveMoms.com.

“I just wondered where were all the other working moms because I knew I was going back to work, both out of desire and necessity, and I wanted to feel connected to people like that. I was new at this motherhood thing and…I think I realized early on that just the power of just connection and recognizing that sense of common connection with other people, that really is so powerful.”

After working in marketing for several years, Marisa noticed a gap in cable news programming. Despite having no previous experience in television, Marisa wrote a programming proposal and pitched the idea cold to a cable news channel. She found herself thrown into the deep end of the pool, producing a two-hour daily show alongside individuals who had been in the industry for years.

“An incredible life lesson in terms of…how to draw connections and I realized it wasn't actually that different, in the sense that, if you're a good marketer, you're thinking about your consumer and you're curating content that will resonate with them and that's what producing television package was. What I didn’t know, of course, were the technical parts of the job, and that was the part I had to learn.” 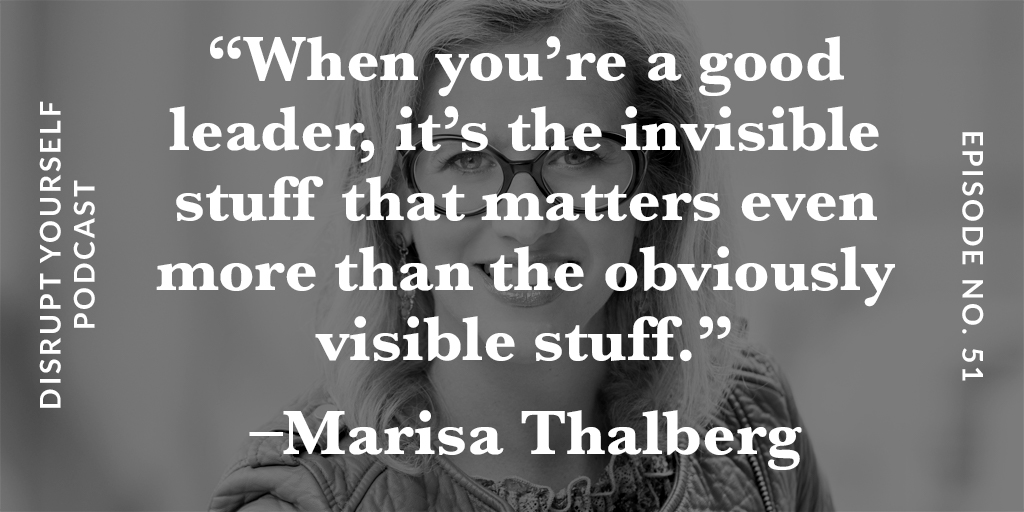 Now the CMO of Taco Bell, Marissa finds ways to innovate even while keeping the brand on the steady trajectory it was on when she was hired.

“This was already a very successful brand when I arrived, and in some ways that's more intimidating…than going to a brand or business that is struggling because you know you're there to try to fix and here, you know, it was a little like taking the Hippocratic oath, “First do no harm,” and then how do you make it even better. It's harder.”

I greatly enjoyed hearing Marisa’s story, and gaining just a small insight into how her mind works. I think you’ll enjoy it, too. Listen on iTunes or in the player below, and if you enjoy the show, please consider clicking here to leave us a review.

Leave a review for the Disrupt Yourself Podcast

Build an A-Team: Play to Their Strengths and Lead Them Up the Learning Curve by Whitney Johnson

Download the first chapter of Build an A Team for free: https://whitneyjohnson.com/ateam