Meredith Kopit-Levien: On the Front Line of Journalism 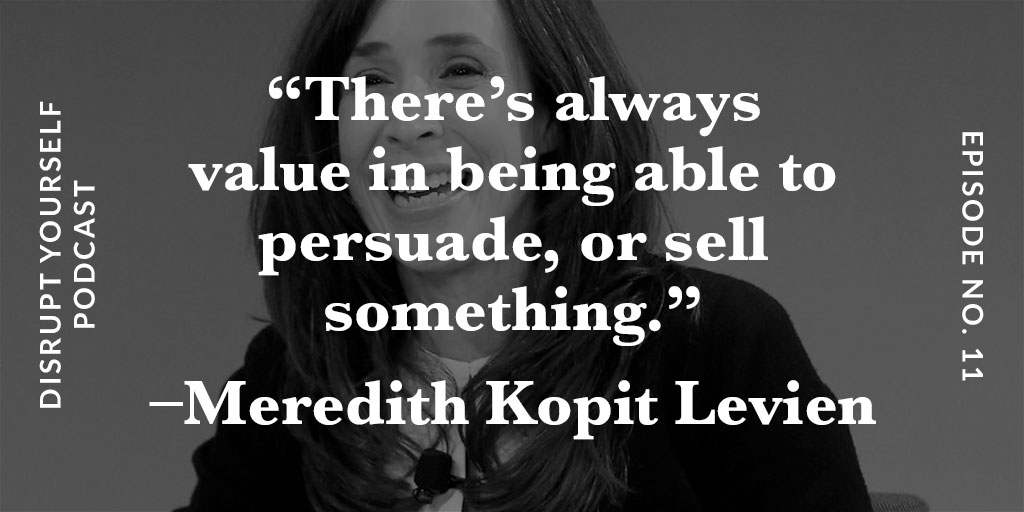 Meredith Kopit-Levien, my guest on Episode 11 of the Disrupt Yourself Podcast, is the Chief Revenue Officer of the New York Times. In this capacity she is responsible for keeping the venerable institution of the Times a thriving business. Almost nothing has been disrupted as much as the news media/journalism industry. Even the New York Times, one of the world’s greatest newspapers, is not immune.

Meredith is on the frontline in a continuous battle to keep up—even stay ahead—in a business that is evolving so rapidly that many once familiar and distinguished papers have disappeared. These papers have been overtaken by cultural and technological changes that have rendered the reading of the newspaper an archaic, almost extinct activity. But Meredith is quick to distinguish between the NYT as a journalistic enterprise, and the physical object of “the paper”. The latter is expendable; the former is not.

In the interview, she reveals that a substantial part of the time she has spent with the Times has been engaged in team-building—bringing in the best and brightest stars in the various domains necessary to keep the business side of the Times healthy and thriving to sustain the journalistic side. She takes obvious pride in the talent she has assembled: “There’s a moment when you know that you really have a team. When you feel like you’ve really got all the right talent around you.” That’s a team that can make magic happen; that’s the team she has built at the New York Times to tackle the formidable challenges facing a 21st century news organization.

Teams are more powerful than individuals; nevertheless, every team needs a point man—or as in this case—point woman. The person who understands what has to be done and takes accountability for getting it done. I want to be the person “at the foul line to take the winning shot,’ Meredith says, ‘When the game is on the line and there’s no time left on the clock.’

For twice-monthly updates on personal disruption, sign up here.