It's time to punch up my bio.

I tried to do it on my own, but eventually hired a professional resume writer (name to be unveiled upon completion).  Once I hit the Paypal button, I felt relieved.  She, the expert, will mine for the pay dirt that is me.  She does, in fact, know where to dig. That's for sure.  But it turns out I have to do much of the digging myself — become a gold digger.  What are my five most significant career accomplishments, my ten most stellar traits, she asks.  And so on.

Somewhere in my brain, I've filed away what I do exceptionally well.  I've even been told I have some outstanding traits. But, let the record reflect that my recall of positive feedback is anything but total, making questionnaires about myself burdensome. It also makes me wonder why my brain can't seem to compute positive things. 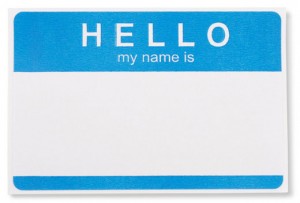 In The Checklist Manifesto, Atul Gawande explains that complicated processes like surgery, where human error can lead to tragedy, require checklists. One of the most important, but often seen as superfluous, steps in his Surgical Safety Checklist is to make sure everyone in the operating room knows each other by name. Gawande found that when introductions were made before surgery, the average number of complications and deaths fell by 35%. He attributed this dip to the “activation phenomenon”: having gotten a chance to voice their names, people were much more likely to speak up later if they saw a problem.

Gawande discusses the importance of stating our names.  I'd like to propose we take this a step further.  That we learn to both say our name, and to name ourselves — what we do well, and who we are.  To be able to expertly answer the question, if you were a stock, why would you as a

We own our names.  Are we able to activate ourselves?  To own who we are?

I am going to try, but knowing how difficult this is going to be, I've devised a plan:

1)  Make note of praise —  Recently during a speaker's Q&A I was asked how Dare, Dream, Do had made a difference.  Notwithstanding the many lovely notes I've received, I struggled to share an anecdote.  I've since started a word document where I record positive feedback about the book.  Compiling positive reviews into a single document is a good way to start activating ourselves.

2) Commit to memory ‘strengths' test findings — After taking tests like Marcus Buckingham's Strengths Finder, or The Gabriel Institute's Teamability Assessment, I am going to write down the finding, and memorize a bullet point or two, so that I can internalize what I've learned about myself.  (P.S.  I highly recommend you have your significant other and children also take these tests.  I was fascinated by what I learned.  They were too.) The language from these tests will help us begin to form a more complete and accurate description of ourselves.

3) Write a 3-bullet elevator pitch —  Once my bio is finished, I will prepare three bullet points (an elevator pitch on me, if you will) as to why Whitney Johnson as a thought leader is a buy.  If you see me in late January, be sure to ask for the pitch — just to keep me honest.  We do this for our stocks, for companies, for products daily.  Why not for ourselves?

4) Name others — In order to make it easier for others to name themselves, I am renewing my commitment to be the see-er of your magnificence.  You may already see the traces of gold; I will simply help to reinforce it by letting no kind word go unsaid.

Is it time for you to punch up your bio?
To name yourself?
To own who you are?