It’s book launch week! Tuesday, January 11, has been circled on the calendar for what seems like forever.

Last week, by way of encouragement, friend and mentor Michael Bungay Stanier forwarded me a quote from Austin Kleon’s newsletter. Kleon had, in turn, picked it up from American author Jonathan Lethem, who wrote about the strange abyss of waiting for a book to publish in The Ecstasy of Influence:

“For me, there’s a weird, unfathomable gulf—I almost wrote gulp—between the completion of a novel and its publication. Some days this duration feels interminable, as though the book has voyaged out like some spacecraft on a research mission, populated by forgotten losers like the ones in John Carpenter’s Dark Star, a craft cut loose by those who launched the thing and now grown irretrievable, bent by space and time into something distorted and not worth guiding home. Then there are other days where the book might be a pitch that’s left your hand too soon, now burning toward home plate, whether to be met by a catcher’s mitt or the sweet part of the bat you can’t possibly know. Hopeless to regret it once you feel it slipping past your fingertips. Just watch. (That’s the gulp.) The weirdness is in that interlude where the book has quit belonging to you but doesn’t belong to anyone else yet, hasn’t been inscribed in all its rightness and wrongness by the scattershot embrace and disdain of the world.”

I appreciate Lethem for having described so artfully the strange limbo that exists after a manuscript is finished—all finished, all the different stages of editing, etc.—and while the publisher does all its mysterious work before the book is officially published.

Publishing a book has been compared to having a baby, which I think it is NOT like. But it resembles expecting a baby in its commingled anticipation and terror.

It’s inconvenient because I have been trying to emphasize finding more joy in my work and less anxiety. I want to lead with what has been achieved rather than fretting about what remains to be done. This isn’t my natural tendency. And, as we found when researching and writing the new book, Smart Growth, it may not come naturally to most of us.

We found that an important phase in the S Curve is Anchor, a point where we have achieved our objective and pause briefly before setting sail again. During that pause, we need to celebrate. The positive emotions associated with celebration help solidify our new habits—the brain loves those good feelings. In the book, we share the research and some stories. Still, the fact is, we struggled to find businesses and even individuals who make celebration a part of their regular process. We’re always just “on to the next.”

Earlier this week, in the CFM app, Shawni Pothier advised that “When you finish your jobs, take a minute to look at those jobs and to reflect on what you were able to do. Whether it’s a sparkling clean bathroom or whether it’s a perfectly made bed. Sometimes, there are going to be things to improve on that you can look at and try to redo, try to do better next time. But just take a minute to reflect on those jobs.” I love that advice – pause and appreciate the work that was accomplished.

So this week, I celebrate having a new book. If you haven’t already, buy a copy or two or three. We’ll give you a complimentary ticket to join us on January 20th for our Begin, Grow, Pivot, Learn online gathering with Apolo Ohno, Pamay Bassey, Michael Bungay Stanier, and me.

What can you celebrate today? This week? Recognizing the good in small, even daily, victories is as valuable to our growth as throwing a party for the big ones. Let’s learn to do both.

This week we’re joined on the podcast by Adam B. Levine. It’s hard to talk about personal disruption without giving due to disruptive technologies. 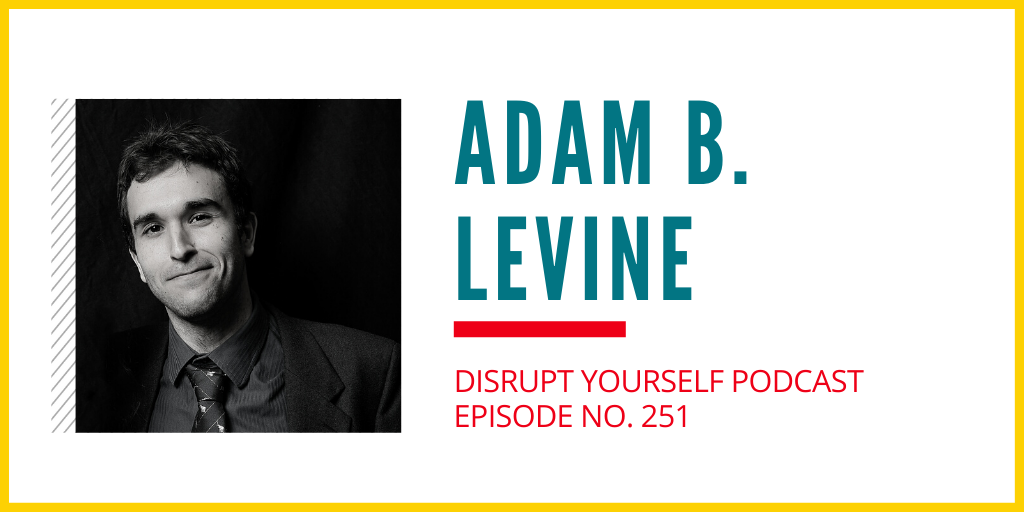 Adam, managing editor of CoinDesk, host of the Speaking of Bitcoin podcast, and CEO of Tokenly.com—is here to provide a primer on blockchain, cryptocurrencies, NFTs, and the philosophy behind the decentralization movement. You will want to join us!