“Yesterday is history. Tomorrow is a mystery. Today is a gift…that’s why we call it the present.” Eleanor Roosevelt

Last Saturday, my daughter, Miranda, and I drove down to Charlotte, North Carolina, to attend a Jacob Collier concert.

If you’re not familiar with Jacob, he’s an English musician who became a YouTube sensation with his covers of popular songs about a decade ago, when he was still a teenager. His debut album, In My Room, was released in 2016 when he was in his early 20’s. It was entirely arranged, recorded, and produced in a small room in his London home. He won a couple of Grammy Awards for his efforts.

Fast forward to the present. I'd thought about seeing him six months ago but hadn't acted.

But then I had two conversations.

The first was with a friend, Richie Norton, author of the upcoming Anti-Time Management: Reclaim Your Time and Revolutionize Your Results with the Power of Time Tipping. When I said something to the effect of, ‘Someday I will…[go see Jacob Collier],” Richie called me out. With a smile. He’ll be a guest on the podcast in a few months. You'll understand why he called me out when you listen to our conversation, though the title of his new book hints at this.

The second conversation was with Susan Cain, author a decade ago of the movement generating Quiet: The Power of Introverts in a World that Can’t Stop Talking. My conversation with her will also be on the podcast soon, and we will talk about her new book, Bittersweet: How Sorrow and Longing Make Us Whole. One of her themes is creating opportunities for bittersweet moments, like attending a concert.

That's why we surround ourselves with people who inspire us. They can help move us to actions that we find too easy to postpone to a future, but unreliable, day.

I wanted to go to the concert, and I could allocate money to go. My daughter was a willing pal.

The trip would have been a success if nothing had happened but the concert.

But more than that happened.

We had a total of seven hours of drive time (three and a half hours each way).
We listened to Emma McAdam, a brilliant therapist, talk about how to be happier.
We listened to Richie's Anti-Time Management.
We talked about K dramas and did the always fun listicle: “Which characters are the most charismatic?” followed by, “Can you guess which drama this song is from?”
We ate dinner at the King's Table: pork chops, apple butter, and biscuits.

We jammed ourselves into the Fillmore Theater along with 2,000 other people. (Note to self: In the future, buy tickets where you can actually see the person onstage.)

We learned what demographic are fans of Jacob’s music. There was a wide array of people from Gen Zen to Boomers, but mostly Gen Zen and Millennials, lots and lots of musicians and geeks generally. Men and women.

We heard two especially fun songs, Time Alone with You and All I Need, live. Oh, and here's the link where I first heard him singing Stevie Wonder's Don't You Worry ‘Bout a Thing (He was 16 or 17).

I got to watch an incredibly gracious person introduce everyone in the band. He talked about them, where they were from, including the technical staff.

He turned the audience into a choir, a hallmark of his charismatic performance style—lots of people, together, happy, enjoying music.

My daughter and I would have missed all those experiences if I hadn't bought the tickets.

What have you been wanting to do? Thinking about? Procrastinating?

There’s no time like the present. Consider this your push.

Disrupt yourself, just a little.

This week’s podcast episode is with Marshall Goldsmith, one of the world’s pre-eminent leadership coaches and executive educators, inducted into the Thinkers50 Hall of Fame. 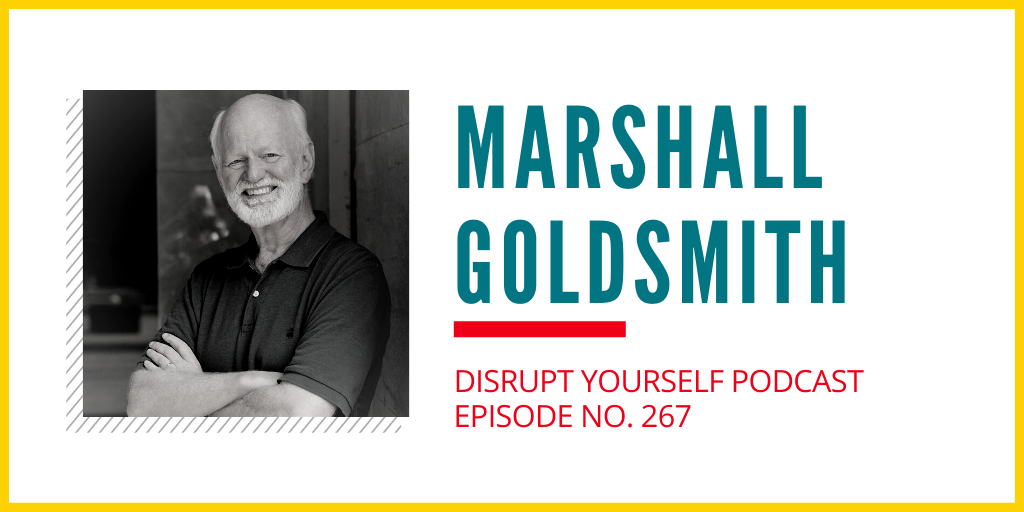 He’s just written a book titled The Earned Life, where he tackles questions like the meaning of achievement. Having been a truly generous mentor to me since inviting me to be a part of 100 Coaches five years ago, he has certainly earned my respect and deep appreciation, and his name––he marshals the gold in people.

As always, thanks for being here!

P.S. Thinkers50 is launching a Books for Busy Managers Series. The first list will be Classic Books, books that have had a lasting influence on how we think about management. Our team has nominated The Innovator’s Dilemma, Good to Great, In Search of Excellence, Creative Experience, and The Country Bunny and the Little Gold Shoes. What books would you nominate?