Step Back to Grow

Last Wednesday, we dropped our daughter off at college—and on Sunday, we picked her up.

She wasn't experiencing a run-of-the-mill case of pre-college jitters, but more of an “I'm not yet ready to be here in the way that I need to be ready in order to be successful” kind of stress.

She decided she was going to take a step back. It was a hard call for her to make. What would we, her family, think?

What would her roommate think? What would the university have to say about her choice?

What would she say to herself?

That’s what happens with disruption. Sometimes, people think you have lost your mind–why would you step back from this opportunity? And the feelings of the significant people around us can have a pretty potent influence. There are a variety of folks in our lives who feel like they have a stake—they are stakeholders—in the enterprise that is us. They may even feel our choices reflect on them in a positive or negative way. We may even buy into that narrative, after all, it’s hard to swim against such a powerful current.

While it is true there are many people who have an interest in us, you and I are still the majority share stakeholders in ourselves. The learning curve we’re on has to work for us, first and foremost. Learning to manage the expectations of others, and stand up in face of them, is a hallmark of maturing as an autonomous human being.

Stepping back whenever we feel it is needed is necessary to our growth. Our biases are always moving forward and up. However, there is a lot going on in the arenas adjacent to where we are now, inviting lateral or sideways moves. And, the greatest opportunity for growth often opens up by moving back or down.

The whole idea behind disruption is that we are on horizontal and vertical—x and y axes—of growth. We anticipate that a step forward in time will be accompanied by a complementary step up. Over one, up one. But sometimes, a step back can position us differently so that in the future, each step over results in two steps up, or three, or five.

The step back is a springboard for greater momentum, and for compounding, rather than linear, growth.

Our daughter chose to jump to a new S Curve–a learning curve of figuring out her next steps. Sometimes we know exactly what we’re going to do when we step back and sometimes, we have to figure it out as we go. We take a step forward, gather feedback, and then adapt based on what the feedback teaches us.

As so often seems to be the case, the content we planned to release is surprisingly timely. This week's podcast—Episode #180—is a solo episode in our series focused on the seven accelerants of disruption. In it, we discuss accelerant number five: Step Back to Grow. 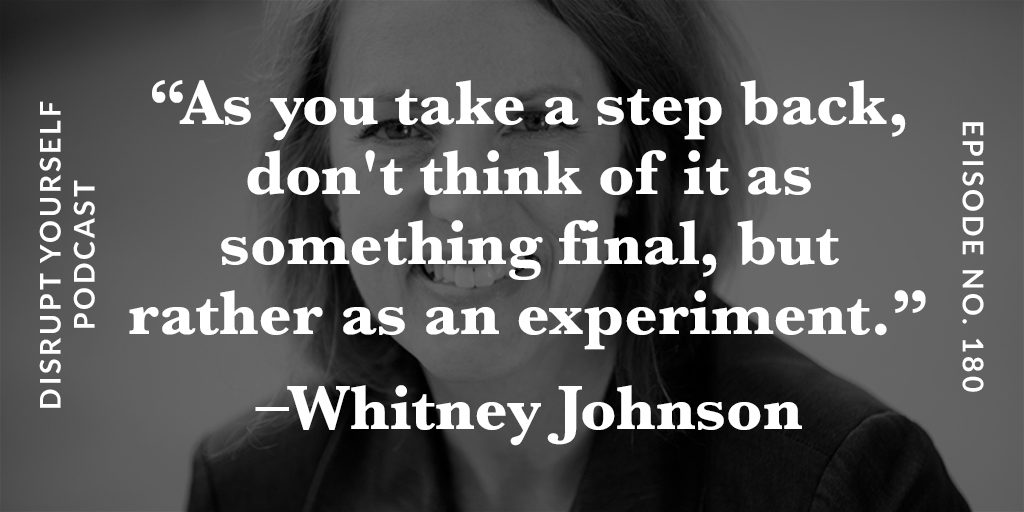 When have you taken a step back to grow?Join me to learn more about why we want to crouch before we jump and need to bring our fist back before we punch. Personal disruption involves moving not just up, but sideways and back too. Pulling back can, in many situations, become a slingshot forward.

What next step back do you need to take?
After listening to the podcast episode, what will you do differently?

As always, thank you for being here!