In the Face of Fear

She was four years old. She'd been stung by a bee—twice in one week—and was in pain and terrified.

Not Mikaila Ulmer's parents. They told her that she could be afraid, but first she needed to learn about the bees. So learn she did. And as she studied the bees, she discovered that bees were as afraid of her, as she was of them. That’s why they sting people. And, they have good reason to be afraid because they are legitimately in danger.

Bees could have become for Mikaila, as they are for probably 99% of the population – something to fear and avoid. Instead, once she understood them, she became their champion. It was a small but momentous choice, made by a child, encouraged by her parents and based on a simple principle of fairness. Before you decide that something—someone—is your enemy, learn about them.

Mikaila decided she wanted to help bees. She founded Me & the Bees Lemonade. Now, she’s the CEO of this $13 million plus business that started as a home-based lemonade stand featuring Mikaila’s special recipe. She gained traction selling to the churchgoers who attended services at the chapel next to her home, expanded to local restaurants, and then started bottling for sale on a larger retail scale. Fast forward ten years, Me & the Bees Lemonade features multiple flavors, and sells hundreds of thousands of bottles each year—nationwide in the U.S.

Mikaila's been honored at the White House—twice—and met President Barack Obama. She’s now 15 years old and has been named one of the most influential teenagers in America.

In 2015, Mikaila pitched her business on the reality show Shark Tank and came away with a $60,000 investment from Daymond John. New product lines were developed, tee shirts and hats and so forth. She dedicates ten percent of Me & the Bees’ net revenues to the Healthy Hive Foundation, which she founded to help America’s declining bee population recover.

“Every time I judge someone else, I reveal an unhealed part of myself.” Anonymous

I wonder, during this time when we are so quick to label and judge one another, what would happen if we took a cue from Mikaila?

What would we find? Would we discover that the person / people / political party we are afraid of, are just as afraid of us?

There is a timeless quote by James Baldwin: “Not everything that is faced can be changed, but nothing can be changed until it is faced”. Mikaila chose to face her fears. Given the same opportunity, what will we do?

What if, in the face of fear — instead of attacking or disdaining, instead of shaming or blaming, we seek understanding?

Imagine the good we could do if, in the face of fear, we demanded a little more of ourselves. Mikaila is our podcast guest this week. You’ll be enlightened, delighted and inspired. 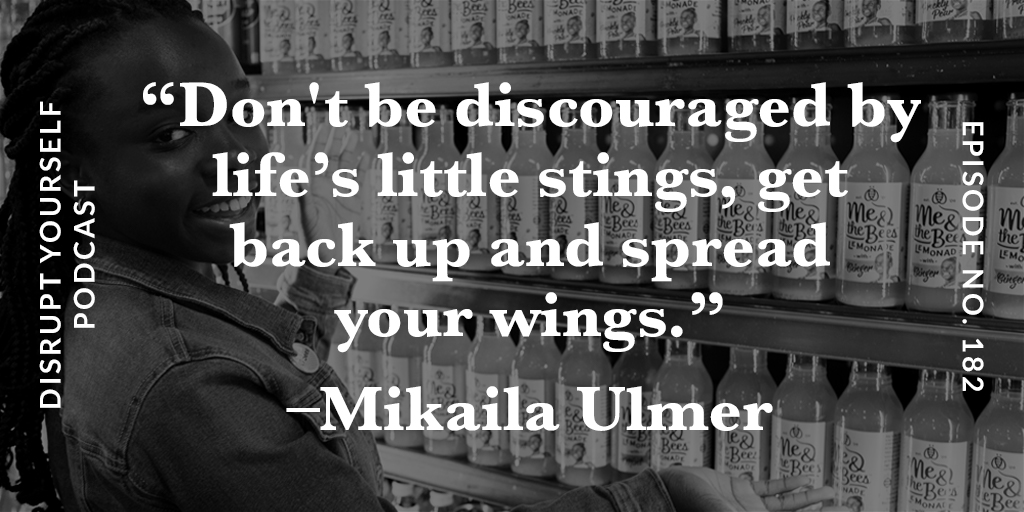 My best,As always, thanks for being here.

P. S. Mikaila has a new book available: Bee Fearless: Dream Like a Kid. To be eligible for a copy, hit return and say, “I will bee fearless.”

​P. P.S. We are opening the Disruption Accelerators again for October…​