Last week we watched Enola Holmes on Netflix. It was family-friendly and delightful. Easy for me to recommend.

The story focuses on the character of Enola Holmes, the younger sister of Sherlock Holmes. Her mother (Helena Bonham Carter) has taught her 19th century daughter everything she needs to know–martial arts, reading every book in their library, compassion, etc. But now, mom has unexpectedly disappeared, leaving Enola to fend for herself.

It’s a learning curve that most children find themselves on, sooner or later. Making their own way, without mom and/or dad to make most of their decisions for them.

Watching Enola made me reflect on my recent interview with Shellye Archambeau, who happens to be our podcast guest this week. Early in life, she confronted many challenging experiences. Some of them were typical of childhood and some, were the result of racism–challenges that aren’t universal, but yet, afflict far too many.

When this happened, her parents left her alone. Sort of. Shellye’s parents were there, available to step in if needed. (It’s reminiscent of what Mikaila Ulmer’s – featured on the podcast a couple weeks ago–parents would and would not do a generation later.) However, the critical factor – the thing so many of us struggle to do – is they were willing to let their daughter try to work through the problems on her own.

Shellye was the first African American woman to be CEO of a Silicon Valley company. Today she is on the boards of Verizon and Nordstrom. One of her distinctive strengths is how deeply she believes she can.

She’s unapologetic in believing she can jump to a new S Curve and be successful there. Unashamed. Unabashed. She learned early that she was capable, that she could do hard things.

I want to be more like Enola and Mikaila and Shellye. My brain doesn’t always seem to compute the way theirs do. They believe they can, and they go and do. I want to be that person, the one who believes I can, but often I expend great effort to persuade myself that it’s true.

But more and more I want to be a person who helps the people around me, starting with my children, believe they can. But it might mean leaving them alone a little, to work out the questions, the problems, and solutions for themselves. Like Enola Holmes’ mother did. And Mikaila's parents and Shellye’s. I think these parents understand that sometimes, love shows up best when it takes a step back.

I wonder how many of us step in too soon, potentially stunting the growth of those entrusted to our care. It can be exceptionally difficult, to allow our children (our mentees, our team members) to flounder and fail, to get the wrong answer maybe multiple times before they get it right. Or, as I’ve discovered is often the case, to let them be strong and right and sometimes, maybe ofttimes, smarter than we are.

But we can figure it out, and so can our children if we’ll let them. Parenting doesn't end when your child is six, sixteen, or even sixty.

With a nod to George Eliot, it's never too late to be the parent you might have been. 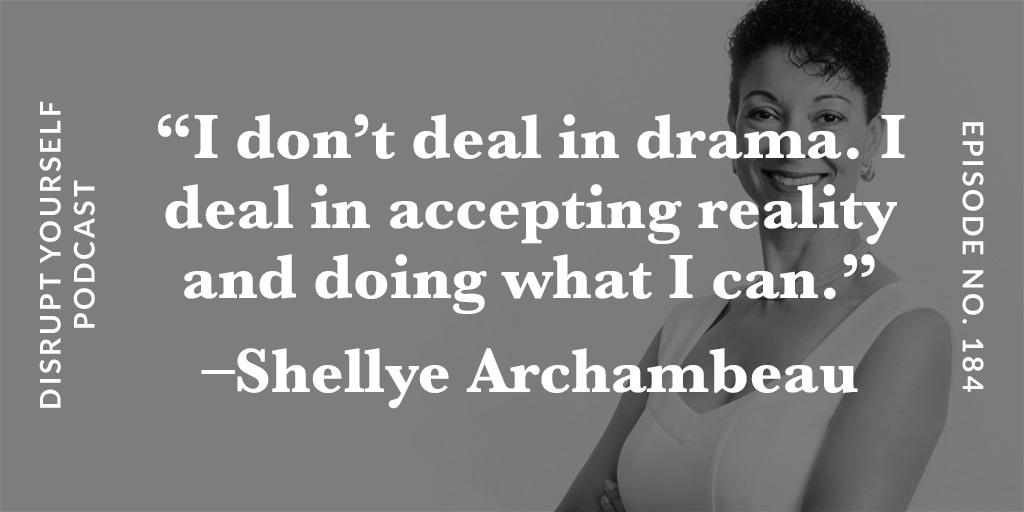 Take GOOD care of yourself!You can listen to my interview with Shellye here.

P.S. If you'd like to be eligible for a free copy of Shellye's book, hit return and say, “I am unapologetically climbing my current S Curve.”
P.P.S. A reminder that on Tuesday, October 13, at 9am Eastern U.S. I will be speaking at 100 Leaders Live. If you've been wanting to learn more about the Personal Disruption framework, join us. It is a 3-day FREE virtual summit.