My husband is a scientist; experiments are fundamental to his work. He conducts experiments routinely, continually, and he teaches his students to do the same.

I never gave this much thought…until recently.

I had just finished a live coaching session; I wasn't happy with how it had gone. Most of the time I do a pretty good job of keeping the gremlin of perfectionism at bay (I’m not sure my family would agree with this characterization, but it’s the story I’m going with), but occasionally it escapes my efforts to restrain it and appears in full force.

When I shared what happened with one of my advisors, she said, “Change your narrative about the situation. Tell everybody up front, ‘some days it's going to be great, and you’re going to think I’m awesome at coaching. Other days, you'll think I'm terrible. When (notice the word when) I mess up, let's analyze what went wrong. We're running an experiment.’”

When I started describing it that way, a mental switch was flipped.

When I’m experimenting, my ego, my identity, and especially my value, are taken out of the equation—the gremlin sleeps, and even if it stirs, it’s so well restrained there isn't space enough to even rear its head.

Experiments are the way through, over and around perfectionism.

By approaching the subsequent live session as an experiment, we all learned more. It was even fun! I’ve realized since that this approach doesn't apply only to special projects or presentations, it can be employed as an approach to our day, every day.

We set the experiment up with this narrative, “Today I am running an experiment. I've got five major things to do. I'm going to experiment with how I do them. I'll prepare for each experiment because scientists have protocols. I'll consider consider what variables I want to test. Then, I’ll observe what happens, what works, what doesn’t and make adjustments for tomorrow. And the day after that.”

It's a change in mindset and approach, but it can be a seismic shift. Instead of fearing the inevitable goofs and failures, we can look forward to what we’re going to learn.

Every day is a new S Curve.

In this week's podcast we feature Ben Shewry, an award-winning chef from New Zealand who practices his craft in Australia at one of the world’s renowned restaurants (which he also owns, so he’s a businessman too). He’s an innovator with food—with indigenous ingredients and unique menus and presentation.

He’s experienced his share of failures, in part because he is a person who experiments continually. He applauds his restaurant guests for being patient with him as he experiments. I love this aspect of his story—relationship with his guests. Covid-19 has forced people like Ben in the hospitality industries to be even more innovative than before.

Ben, is an experiment for me too. I had started watching Chef's Table, on which he was featured. I found his story compelling and reached out for an interview, hoping he would respond. As it turns out, he did. That experiment has taught me to expand my vision of people I can connect with and not to let doubt dissuade me from reaching out. 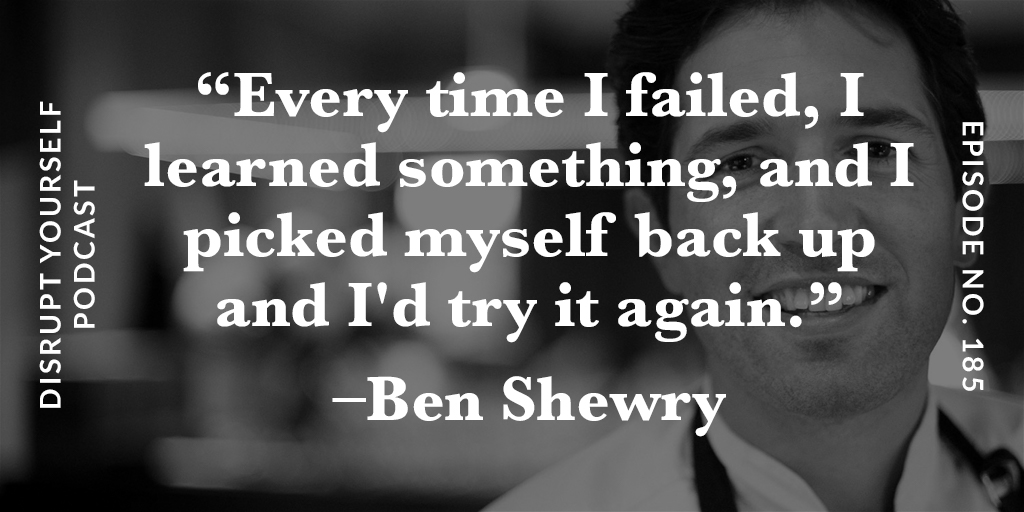 You can listen to my interview with Ben here.

How might today be conducted as a series of experiments?
How might you make it possible for the people around you to become experts in experimentation?

As always, thank you for being a part of this community.