The Courage to Take Others at Their Word

When Kara Goldin, Founder and CEO of Hint, graduated from college she applied for jobs in multiple big cities around the country. She made a point of specifically requesting an interview, not just a job. With lots of responses in hand, she launched a month-long tour of the country (this was the late 1980’s) to land a job with an interesting company that was interested in her.

One of the letters she had was from the New York City firm she most dreamed of launching her career with. The gist of the letter was that if she was ever going to be in the city, she should reach out to schedule an interview.

Kara went to New York City. She reached out. But not in the expected way, with a phone call to schedule an interview that could be graciously declined, at an anonymous distance. No fuss, no muss.

Instead she presented herself in person, with her letter. The people she talked to were confused and amused by her. Kara realized well before her trip to New York that her letter wasn’t a serious offer of an interview, much less an invitation to a job, but instead a polite dismissal. Nevertheless, she stood her ground. It’s harder to dismiss and decline when someone is standing right in front of you.

Eventually they remembered that there was a job opening in one of the divisions. It wasn’t what she’d been educated to do, but once she’d secured the interview and then the subsequent job offer, Kara accepted. This was her place to start, in the city and business she wanted to make her beginning.

I was gob-smacked by this story—and loved it. I would hope that I would be bold like Kara was, but I’m not sure my twenty-year old self would have. It might have felt too risky. 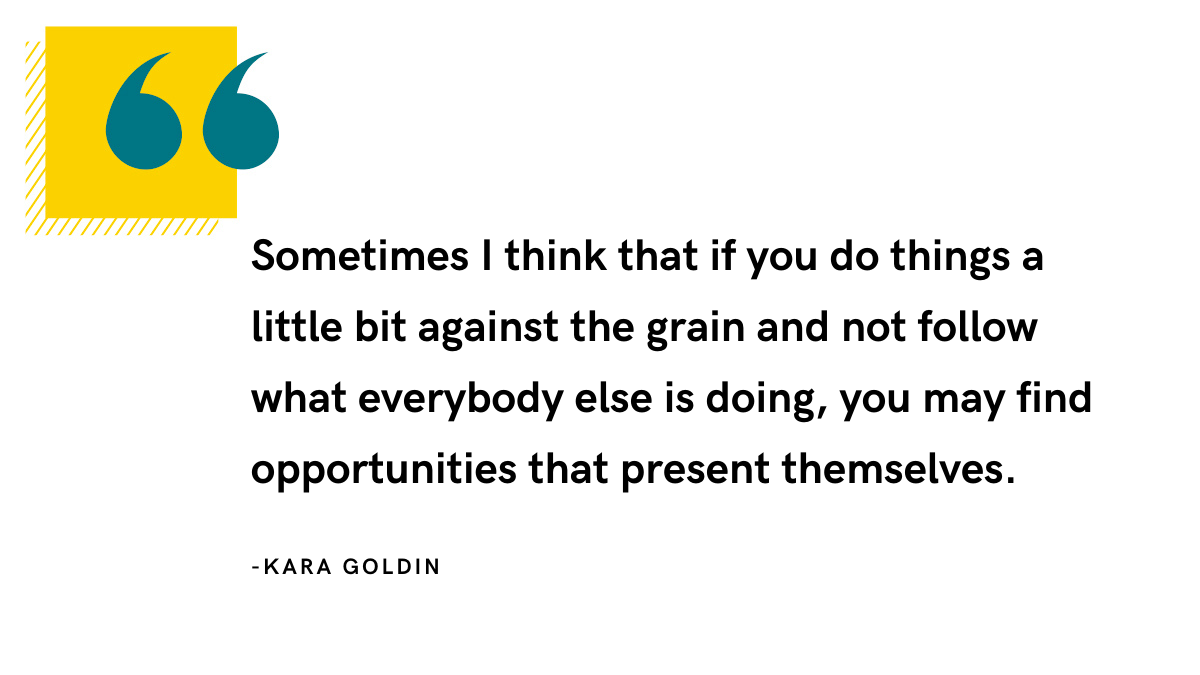 My second question is, how many offers are made to us every day that we don't accept? I’m talking about offers from people who want to help you. Helping others increases our feelings of being useful and effective. Do we recognize and accept the help – thus allowing others to enjoy this empowerment?It makes me wonder, when people offer something, how do we respond? Do we take them at their word? Do we trust people enough to expect that they will come through, and act accordingly? That’s one question I have.

When I asked Mikaila Ulmer (Episode 182), the entrepreneur we had on our podcast a few weeks ago, if she was afraid to request help, her answer was a resounding no. Mikaila is accustomed to people willingly helping her and she is wise enough to see that.

I believe if we pay attention, we will find that in a day – and definitely during a week – at least one person will offer to genuinely help us in some way. No strings attached. They simply want to invest in our success. Just as I suspect there is a handful of people, or more, that each of us wants to invest in.
​
Kara offers us a lesson in moxie, no doubt. But she also offers us a lesson in awareness. This week, I hope you have an abundance of both.​

As always, thanks for being here.

You can listen to my interview with Kara Goldin here.

P.S. Our giveaway this week includes one of three copies of Kara’s book and a case of Hint Water. To be eligible, post on Instagram what you learned from the podcast and tag me @johnsonwhitney and @karagoldin. Her book is delightful. Hint Water is delicious.