Sarah Elkins | A Dream I Didn’t Know I Had

Sarah Elkins reached out to me after being inspired by Elizabeth Keeler’s A Farm Girl’s Dream and Michelle Bratsafolis’ Taking My Dream Out to Play; I immediately asked if she would share her story with us.

It started with Craig’s list. My husband responded to someone looking for a musician to play with, just for kicks. Ryan came over one night while I was out with friends and when I arrived home, he was putting his guitar back into his car. I introduced myself and asked him about his music, about his family. That’s when he told me about his wife, Twila. She used to sing with a couple of gospel choirs. Instinct kicked in and I invited him to bring his wife and daughter next time and we would have dinner and music together.

We had a lovely dinner, and while our boys and their daughter watched anime movies in the den, I pulled Twila into our music room and picked a song for us to try together. Neither of us had been singing for a while, for me it had been about 20 years since I had done anything more than sing to my children. It was magical. Our voices blended and wrapped around one another. We both had chills up our spines as we sang together. There were moments when our voices were so well merged it sounded like there was an organ behind us.

One music night turned into a music night each week, which turned into two music nights some weeks. More musicians were invited to join us, friends came by for dinner and to listen to us practice. Our house developed an incredible reputation for good food and great music. Ryan and Bob learned each other’s strengths and weaknesses and challenged each other to practice and improve their guitar playing. Twila and I were so inspired; we would begin a song and could feel our voices taking it to a different dimension. We experimented with songs that we had never heard performed with harmonies, magical is an understatement. We eventually realized that we had about a dozen songs down well enough to perform them and took the first step to creating a band – open mic night at a local coffee shop. We had such positive feedback, we needed a band name. The Perfect Jones was born.

I had no idea that performing – singing – was my dream. 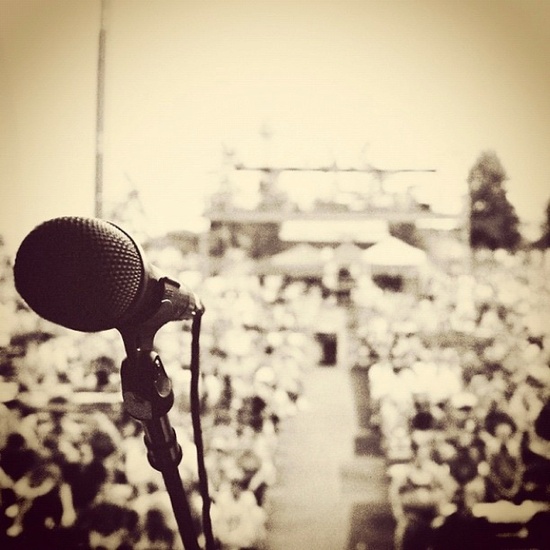 Last night I got paid to sing… again. I never dreamed I would sing and feel like a rock star. I never dreamed that people would pay to hear me sing. Now that it’s happening I realize it is a wonderful dream and one I am not willing to give up any time soon. When I talk about our band and performing, my grin shows all of my teeth.

I am also a mom to two wonderful boys (another dream that I didn't quite know I had), a spouse to a remarkable man and musician, and I have a regular full-time job. Singing is my part-time job and it doesn’t pay well.

But it’s my dream.

Do I have to monetize it to make it real or valid?
What would be the minimum amount of money I would have to make for each gig or over a year to make my dream valid?
Does my dream have to get bigger?
Do I have to want more from it?
A recording contract?
Rock star special treatment wherever I go?

I’ll answer ‘no’ to each of those questions (though I might not turn down those opportunities!). Because what matters is that I’m going for it. I’m loving my time practicing and on stage.

I am fulfilling a dream I didn’t even know I had.

When have you discovered a dream that you didn't know you had?

Sarah Elkins has diverse, sometimes conflicting passions, which have led to a unique career path in government and commercial organizations.  A people-person, she brings a unique perspective to improving business and personal interactions. She is a freelance writer, public speaker (www.thesmileisfree.com); a jazz vocalist who also sings with a surf band (think gogo boots, the Ventures, Dick Dale — www.rockettouranus.com); full time employee of the City of Helena in Montana (www.helenamt.gov), spouse and mother.

If you'd like an updates when I post either here or elsewhere in the grand virtual world, be sure and sign up for the newsletter in the column to the right.