7. Sarah Feingold: Disrupt at the Intersection of Your Creative Passion

Find ONE thing you love to do–and do it! That's the secret to a successful career.

But what if you can't decide? You love to do two or three things?

You do what Sarah Feingold did.

Instead of choosing between the two things she loved, she found her niche at the intersection of her creative passion— jewelry-making—and her expertise as an attorney. I recently spoke with Sarah for an episode of the Disrupt Yourself Podcast, where she offered some great insight into this process of personal discovery. 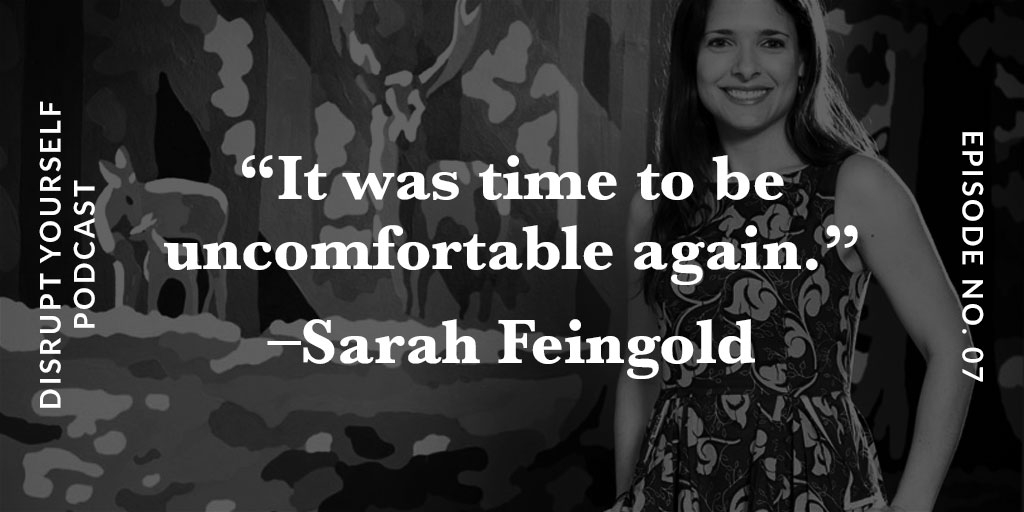 Insight #1: Sometimes love is not enough. Though Feingold loved making jewelry she recognized that she did not want to pursue it professionally. It was physically grueling, involving lots of burns and backaches; not an auspicious option for a long-term day job. She also couldn’t figure out how she would make a living: “I became really emotionally involved in my pieces and couldn’t bring myself to sell them…which apparently you need to do if you want to be a professional artist—put a price tag on it and let them go, but I like to keep everything.”

Having set aside the possibility of a career in jewelry creation, Feingold began mulling a different question, “What aspects of jewelry could be protected by intellectual property? And so that’s what led me to law school, because I wanted to be able to answer those questions for other people.” She picked Syracuse University College of Law—“The University has a fantastic arts program and that was one of the reasons why I chose the law school.” In an unconventional move, requiring special permission from the law school, Feingold concurrently enrolled in metal-smithing while working on her JD.

Insight #2: Bold vision coupled with equally bold pursuit can create opportunity where none appears to exist. Finished with law school and busily practicing law in Rochester, New York, Feingold discovered Etsy, the peer-to-peer marketplace providing space for craftspeople to sell their wares online, and began featuring some of her creations for sale. What followed may become legendary in the annals of personal disruption. “I realized that they were launching some new policies and I had some ideas so I wrote to the Customer Service team and I offered some insights from my legal background.” The response was lackluster, so Feingold followed up, “You know what? Why don’t I just speak with your Founder?”

After an initial phone conversation Feingold, on her own reconnaissance, booked a flight and called the Founder again. “I said, ‘Hey, I’m coming down for an interview. You need in-house counsel and you need it to be me.”

Etsy was an infant start-up at the time, less than two years old. Feingold was hired on the spot as the business’ 17th employee. When she left earlier this year there were over 800 employees. But the growth is not just a number’s game to Feingold. “Helping the company grow in a mission and values aligned way makes me so proud; to see, to read or even to hear people tell me how Etsy has impacted their lives in a positive way”—these things fulfill her dream of helping individual craftspeople succeed in their art.

Feingold has recently taken her talent, expertise and experience on the road again; as the new General Counsel for Vroom, she is working hard to help them disrupt the way we all buy our next car. Our conversation produced many additional insights into a dynamically unfolding career that doubtless holds surprises yet to come, insights that many of us could adopt or adapt to the advantage of our own.

Art and law may not, on the surface, appear to be natural traveling companions but such intersections of talent and training can bring us to career crossroads that launch us down an entirely unexpected path. Sometimes, that road may not have been paved for us; we might, like Sarah Feingold, blaze a trail where none exists.