Last Friday night, my family and I sat riveted to the television, as we watched Nik Wallenda fulfill a lifelong dream.

He became the first person to traverse Horseshoe Falls at Niagara Falls on a two-inch-wide cable suspended 200 feet in the air, spanning the equivalent of more than four football fields.

The feat lasted a little over 25 minutes, but the journey took him almost 27 years to complete.

At age 6, Nik was on a family trip when he first visited the Falls and had the thought, “Wouldn’t it be cool to be the first person in the world to walk directly across the top of Niagara Falls on a tight rope.” The dream was born.

A seventh-generation member of The Flying Wallendas family of aerialists, Nik Wallenda is a six-time Guinness World Record holder and self-described “King of the Wire.” He had been preparing, directly and indirectly, to realize this dream since he first dared to dream it 27 years ago.

In addition to physical and mental preparation, Wallenda needed to get two laws changed — one in Canada and one in the United States — in order to make the attempt to cross Niagara Falls. Each law was more than 100 years old and it took Wallenda two years of lobbying to make it happen.

As with any dream, preparation, patience and persistence in the face of any and all challenges were at the center of his successful completion of the walk.

Wallenda’s journey consisted of 5 stages: The Descent – The Wet Zone – The Valley – The Climb – The Final Test.

His trip across Niagara Falls is a beautiful metaphor for life and the realization of a dream; it was a journey made up of very different stages, each wrought with unique (often perilous) challenges.

In spite of the danger, excitement, awe-inspiring imagery and magnitude of the moment, what struck me at my core was the absolute and undeniable power one person’s dream can have on others.

As I sat (ok, I admit, I stood and mostly paced) watching Wallenda slowly, gracefully walk that two-inch wide cable, I surveyed the room to find each member of my family entranced by what they saw happening on the television.

My nine-year-old daughter’s eyes were the size of saucers when they weren’t obscured by her hands. I could feel her heart pounding in her chest from across the room as she watched. She began asking questions. She started dreaming out loud.

I could hear the inspired and energized crowd of over 100,000 cheering, the commentators expressing their awe, my own child expressing her “if he can do that, I can live my dream” thoughts to her mom and me. In that moment, I could literally feel the power of a dream.

From the time she was born until now, each night I tell my daughter, “Sweet dreams and always dream big.” That night, those words suddenly clicked — for her and for me. For her, Wallenda’s feat was a tangible example of what those words really mean. It awakened her from deep within.

For me, seeing that affirmation come to life in my daughter was humbling and exciting. It was also a great reminder that I must lead by example, that I will not give up on my own dreams, but rather pursue them with the exuberance of a child.

Brian D. Shelton serves as Global Strategic Marketing Manager for ExactTarget. He has over a decade of experience, which includes an extensive background in marketing, public relations, e-commerce management, product development, technology, and web development. Brian holds a Master of Science degree in New Media supported by a Bachelor of Arts degree in Journalism, both from Indiana University. He lives on the west side of Indianapolis with his wife, Rachel, and two daughters. Contact Brian directly at bshelton@exacttarget.com or via Twitter @briandshelton.

Those are just the numbers.

The stories behind the statistics are even more compelling. There's sometimes anger, but usually it's a makeshift mask for the deep sadness that women feel (and I include myself) as we wonder why our dreams aren't created equally.

Then I arrive home. 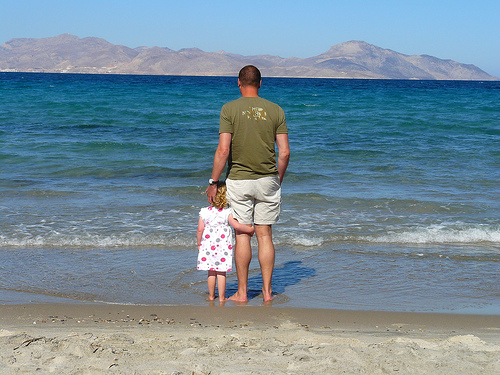 And it's a given.

My husband dares to me to dream — ever and always.

Rarely am I grateful.

Though I'm becoming more so.

As I meet women who are ready to dare, and the men in their life, frequently the gatekeepers (including the husband) aren't quite there. I remember, oh yes, my husband, is.

My 11 yr-old daughter gets this view of the world too.

Will she want to start and invest in businesses — I don't know: her dreams are her own.

What I do know is that her father, one of the most important gatekeepers in her life, is opening the door to her possibilities.

For that, I am — always and ever — grateful.

To my wonderful husband, and to all door-opening men everywhere — Happy Father's Day!

How are the men in your life teaching you to dream?   Some may be showing you how, some may be making it difficult — there is so much to learn, isn't there?

For more on the topic of investing in women and women investing, see I Look for Women Founders Because It's an Advantage featuring @500 Start-ups' Dave McClure, Racism and Meritocracy by Lean Start-up guru Eric Ries,  Weekend Imagination Igniters by leadership thinker Wally Bock, and Why Technology Needs Women by Anil Dash.