The Metrics That Measure You

I look in the mirror every day.  More than once.

If I were to live tweet what's running through my mind, it would rarely be pretty.

In his book Moneyball, author Michael Lewis chronicles how despite being one of the poorest teams, the A's became one of the most successful franchises in Major League Baseball because the cash-strapped Beane reframed the game by recasting how he measured performance.

For example, when the A's acquired MLB relief pitcher Chad Bradford from the White Sox, Bradford's standard pitching metrics were respectable, but his fastball came in at 81-85 mph, and he looked funny when he threw — the scouts made fun of him. But because the A's thought about measurement more comprehensively than the other teams, Beane knew Bradford was a steal.

According to Lewis, “Chad Bradford gave up his share of hits per balls in play, but, more than any pitcher in baseball, they were ground ball hits. His minor league ground ball to fly ball ratio was 5:1. The big league average was more like 1.1: 1. Ground balls were not only hard to hit over the wall; they were hard to hit for doubles and triples.”  Bradford eventually signed a three-year, $10.5 million deal with the Baltimore Orioles. 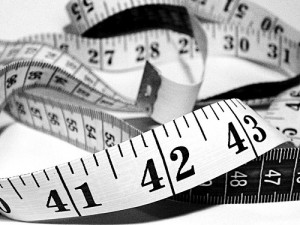 I often refer to this story to encourage finding the metrics that best gauge our performance as it applies to business and our careers, but why not how we look, too?   In Lauren Friedman‘s Psychology Today column I Feel Pretty? she offers two helpful suggestions:

1)  Make a list of three things you most like about yourself.   How many are about your appearance?  Personality, she writes, is at the core of our self-esteem, not physical features.

2)  Choose one or two things that you l like about your looks.  “We tend to equate beauty with a particular set of physical features.  Fall short in one department and your whole self image can be deflated”, Friedman writes.  Why not redefine what beauty is.  Write down what is beautiful about you?  Rather than dismissing those features, train your eye to focus on them.

I just wrote mine down.  A bit of a mind game, but the good kind.  It's a much prettier picture.

And a standard I can meet.

What metrics do you use to measure you?

Why are finding the right metrics important both as you identify and do your dreams?