Think Like Zuck by Ekaterina Walter, Intel's social innovator, is a quick, enjoyable read about Mark Zuckerberg and the rise of Facebook, a social media platform integral to many of our lives. Because Facebook (and Twitter) have taught me to think in sound bites, for your 140-character consumption, here is some of what I underlined:

“Facebook is the world's largest enabler of human communication.” – @ekaterina

“If Facebook were a country, it would be the third largest in the world, behind China and India.” v @ekaterina 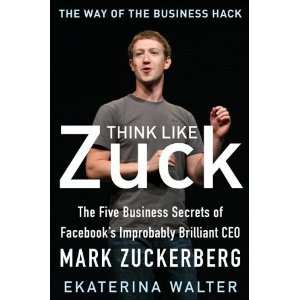 “There is no such thing as failure if you really want to pursue your dream.” – @ekaterina

“Build what you believe in.”  – @ekaterina

“Paycheck over passion:  Pursue your dream now and think about money later.” – @ekaterina

“People don't buy what you do, they buy WHY you do it.” – Simon Sinek v @ekaterina

“You aren't disrupting, if you aren't making someone uncomfortable.” – Deborah Conrad v @ekaterina

“1st day on-the-job for Facebook engineers: Get a bug to fix, once it works, push the change live.” – @ekaterina #activationphenomenon

“Success is a team sport.  No one person can possess all the skills to make a dream a reality at large scale.” – @ekaterina

“True collaboration is a powerful thing: people are naturally drawn to co-create.” – @ekaterina

“You get the shareholders you deserve.” – Warren Buffett v @ekaterina

Finally, and a fascinating piece of research (page 32) — According to American author and journalist Srully Blotnick, during a twenty year period (1960-1980), 1,500 business graduates were asked whether they planned to pursue their dream straightaway or chase financial security.  83% responded they would wait until they were financially set, 17% would go for their dreams.  Twenty years later, out of the 255 graduates that chose what they loved, 100 were millionaires.  Of the 1,245 who chose a paycheck over passion, only one became a millionaire.”

Which of these quotes most speak to you?