Jonathan Fields is a master of personal disruption. He gave up a six-figure income as a lawyer to make $12/hr as a personal trainer.  Then, married, with a three-month-old baby, he signed a lease to launch a yoga center in the heart of Manhattan…the day before 9/11. Jonathan is a self-described disruptor, but a man who knows risks, and the power of uncertainty.

Uncertainty has been on my pile of books to read/blog/tweet for several months.  With other projects pressing, I was about half way through as of this morning.   I confess my plan was to skim the second half, then bang out a post.  Three hours later, I'd become absorbed,  furiously scribbling in the margins, and doing the exercises in Chapter 9 — “Own the Story Line.” If you are want to move your daring and disrupting along, I am certain you'll like Uncertainty. 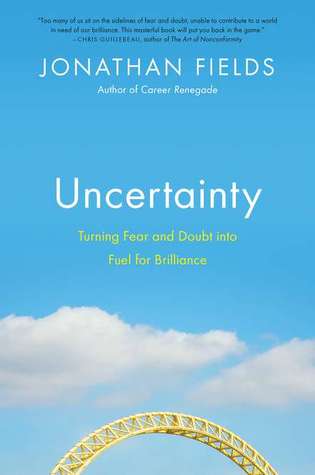 Here are some of quotes that I especially liked:

“Live in the question.”

“The three psychic horsemen of creation are:  uncertainty, risk and exposure to criticism.”

“Anything certain has already been done.”

“It's the undoing that plants the greatest seeds of doing.”

“When you run from uncertainty, you end up running from life.”

“Uncertainty is wondrous, and.. certainty, were it to be real, would be moral death.” – Immanuel Wallerstein

“Rock bottom became the solid foundation upon which I rebuilt my life.” – J.K. Rowling v @jonathanfields

“Judgment is often experienced as pain, but it's really just feedback data.” — @jonathanfields

“The core skill of innovators is not failure avoidance, it's error recovery.” — Randy Nelson v @jonathanfields

“On the back of a hard-to-defend faith and conviction that  ‘this must be done', lie some of the greatest creations and careers the world has seen.”

“Do not confuse genuine peace of mind with the passing lack of angst that follows the demise of a dream but precedes a mounting wave of regret.”

“The possibility of loss is a signpost that what you're doing really matters.”

“The insight phase of the creation process is fraught with tragic flaws and wild opportunities in equal measure.”

“Be fierce with your time: it's the one currency you cannot bank.”

“One of the single greatest determinants of high-level success as an innovator…is the ability to manage and at times even seek out sustained high levels of uncertainty, bundled lovingly with risk of loss and exposure to criticism.”

“It's brutally hard to act in the face of incomplete information, but it's this very lack serves as proof that your journey is not derivative.”

P.S.  If you enjoyed this post, you may also enjoy Robin Cangie's Doubting for Dreamers.