Women (and CIOs) are No-Stats All-Stars

I have described women as no-stats all-stars — no one knows exactly what we do, but when we're around everything seems to work. After reading The CIO Paradox by Martha Heller, president of Heller Search Associates, a Boston-based firm specializing in recruiting CIOs and other IT executives across multiple industries, it occurrs to me that CIOs (Chief Information Officers) could be categorized similarly.  “

[As a CIO],” Heller writes, “You are intimately involved in every facet of the business, yet you are often considered separate and removed from it”.

Here are some of the CIO paradoxes that Heller outlines:

1) The successful management of information has become so critical to a company's goal that in many ways, now is the age of the CIO, yet corporate boards rarely employ CIOs;

2) CIOs must keep costs down at the very same time drive innovation.

3) CIOs are focused on the future while they are tethered to decisions made in the past.

Why are we so enamored Silicon Valley/Alley and tech generally (big data, mobile could computing), and yet IT professionals within a large organization get no love?  In other words, why is tech sexy in some instances and downright frumpy in others? 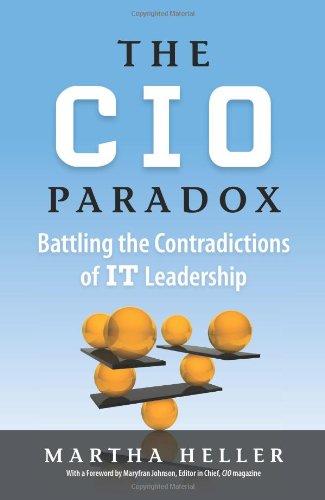 As for some quotes (feel free to occasionally substitute women for CIO):

CIOs have a tendency to believe that they are an overhead function.  When you believe you're overhead you operate differently than when you perceive yourself as leading a P&L.” — Ray Barnard, CIO of Fluor

Business model innovation is the new contribution of IT. — Werner Boeing, CIO of Roche Diagnostics

People believe that IT is about technology, but it's really a behavioral science–understanding the behaviors of your company's staff, leaders, and customers–and facilitating the adoption of a new vision.” — Werner Boeing, CIO of Roche Diagnostics

“Before you take a job, ask who you report to.  And do you a have a seat at the table with the CEO.” — Ray Barnard

“Architecture is a belief system. — Ralph Loura, CIO of Clorox

Finally, I was struck by how Scott Blanchett, CIO of Vanguard Health Systems, employs vendor management as a means of introducing disruption into his organization:

1.  No more incumbents — if your technology comes out of a box, we won't buy it.
2.  Find the entrepreneurs.
3.  Let the data stay put; index the data where it is.
4.  Know the data analytics marketplace.
5.   Get rid of legacy devices.

Overall, an excellent read — learning about the CIO function, the female paradox, and a dash of disruption.