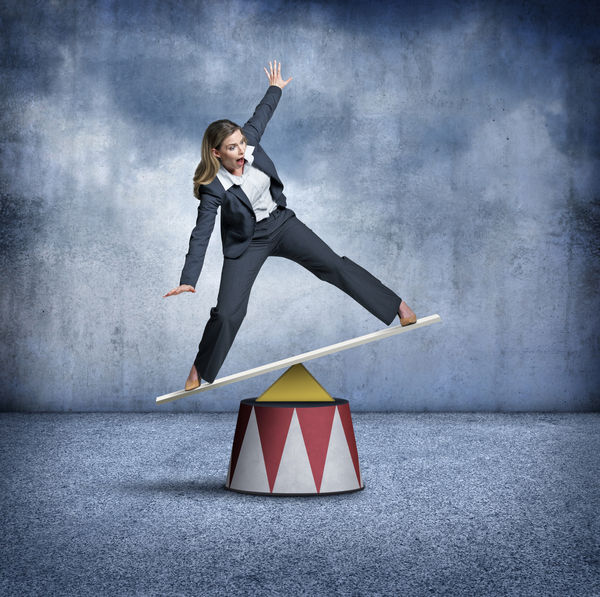 Sometimes, the only way up is down.

As a working mother, I’ve learned firsthand how focusing on professional success can drain women’s energy, while focusing on personal fulfillment makes us vulnerable professionally. It’s a cycle that can seem exhausting and endless—and one that requires disruption to break. Disruption involves moving sideways, back or down in order to move forward. Only by risking change can overtaxed working moms find balance and success—personally and professionally.
I know this from experience. Originally a music major, I had to disrupt my own path. With zero business background, I was hired as a secretary for a retail broker, which eventually spurred a desire to work on Wall Street. I enrolled in business classes at night, and after three years of hard work and the advocacy of a supportive boss, I became an investment banking analyst. I eventually became an award-winning equity research analyst and co-founded an investment firm with Harvard Business School professor Clayton Christensen, DBA. Since then, I’ve written two books, consulted with far-flung companies and spoken across the country.

How can you disrupt your life? In my book, Disrupt Yourself, I present three strategies for personal disruption as well as examples of how they were put to use:

Strategy 1: Take the right risks.
Learn to play where no one else is playing and think outside the box.
Take the example of one woman I met who left a retail job to start a (now very successful) photography company, having never used her mechanical engineering degree. Once she started a family, the hours required by the retail job weren’t ideal. By thinking outside the box, she realized there was a need for family photographers in her city. So she took a risk to pursue a hobby, which led to an impressively successful business—one that allows her to set her own hours and complement her family’s schedule. Taking risks is important. While risks can be uncertain and scary, standing still and never taking the leap can result in just as much regret, if not more.

Strategy 2: Identify your distinctive strengths.
Don’t undervalue what you are, nor overvalue what you’re not.
One woman felt she was merely going through the motions as a teacher, burned out by the time she got home from work. After reflection and feedback from acquaintances, she left teaching to put her strengths in communication and connecting with others to work as a radio talk-show co-host. The change improved her career and home-life balance as it increased her happiness.
Another woman realized she’s a better mother when she works. Acknowledging she couldn’t flourish in all areas, she hired a nanny to help with childcare, meal prep and cleaning. When she’s home she’s able to focus more on being a better wife and mother. While at work as a child psychologist, she’s not sidetracked by duties at home. Our strengths change over time; in order to best embrace personal disruption, ongoing self-reflection is essential.

Strategy 3: Give failure its due.
And accept that it is a matter of “when,” not “if.” Then learn from it.
Think of J.K. Rowling, who was once a depressed single mother on the verge of bankruptcy and considering suicide. She catapulted to success when she wrote the wildly successful Harry Potter series. J.K. learned to separate failure in her professional life from failure in her personal life, and so can we. Both are hard. But just because we’re having a hard mom day doesn’t mean we’re a failure in all areas. We need to isolate those feelings, pick up the pieces and move on.

Disrupting ourselves can be scary, but the payoff in career growth and personal achievement makes overcoming the fear so worth it.