Our limits are rarely what we think they are. And seldom what others tell us they are.

Alden Mills is my guest on the Disrupt Yourself Podcast, a former Navy SEAL, champion rower, inventor of The Perfect Pushup and Founder of Perfect Fitness. As a serial entrepreneur, he’s since founded a second company, Fetch Fuel Pet Food, moved his family to Spain and written a book: Be Unstoppable: The Eight Essential Actions to Succeed at Anything.

Alden knows about the subjectivity of limitation; he was only 12 when a doctor told him that his asthma was going to keep him from doing, well, pretty much everything.

“Here’s a person with known authority telling me…something and [I} have no other reason to believe it’s not [my] limit. A doctor put me through a battery of tests and said, ‘You know, you really need to lead a less active lifestyle. Can I suggest the game of chess to you?’”

Fortunately, his parents, mom particularly, weren’t quick to pull out the board. In fact, it never showed up.

“My mom would just continually remind me that it would be up to me to decide if that was the limit I wanted to embrace or not.”

Alden didn’t become a star athlete, not right away at least.

“I was terrible at anything that involved a ball.”

He was big-legged and slow. In high school he discovered that his physique was perfectly suited for rowing and he determined to make the varsity team even though he was an inexperienced underclassman. He was pretty much alone in believing he could make the team at that stage, but he had

“created what I call an outcome living in my head. And an outcome living in my head was I could not just visualize what it was going to be like wearing a varsity shirt and going and doing a race and going back and telling people, ‘Hey look, I made it.’ But I also visualized what it was going to feel like for my parents to say, ‘Hey, my son made this crew. First one in the family to ever do something like that.’ And I started to apply the pressure on myself that it wasn’t just about me; it was about all the people that I really cared about and getting them included as part of this virtual team when I got to these points where I didn’t think I could give anymore.” 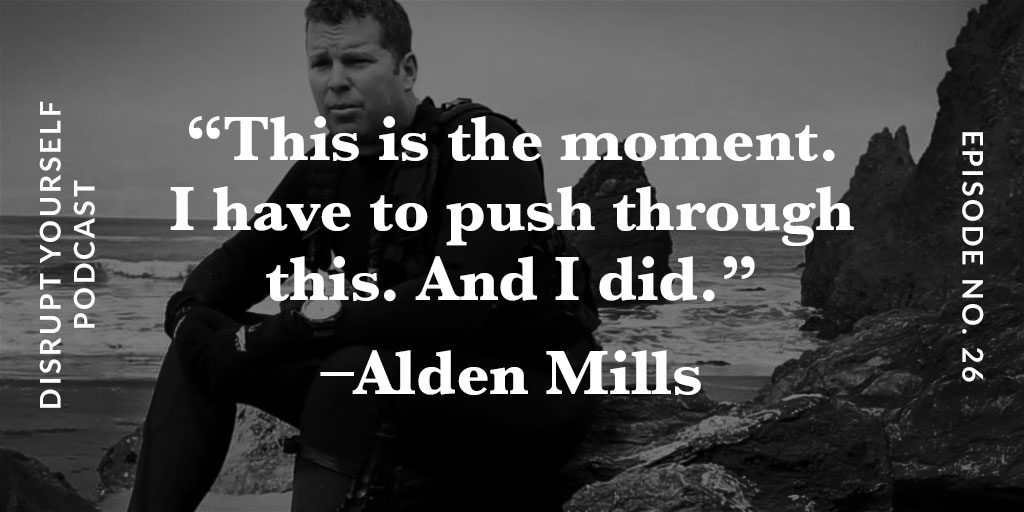 I don’t want to spoil the story for potential podcast listeners so I’ll just say that when there are people who stand with us and tell us that our limitations aren’t really what we think they are, or what we’ve been told they are, it empowers us to make their confidence in us reality.

For Alden, that meant making the rowing team, not just for himself but for the parents who had said that a sedentary chess-playing life was not all he could look forward to.

“I remember [thinking], ‘This is it. This is the moment. I have to push through this.’ And I did. I did it because it wasn’t just for Alden at that point; I had built up this outcome for everybody that was important to me. I knew how proud it would make them.”

Learn from the inspiring, unstoppable Alden Mills on the Disrupt Yourself Podcast in the player below, or by subscribing on iTunes.

Be Unstoppable: The 8 Essential Actions to Succeed at Anything by Alden Mills

Grit: The Power of Passion and Perseverance by Angela Duckworth

Crossing the Chasm: Marketing and Selling Disruptive Products to Mainstream Customers by Geoffrey A. Moore