Bernie Swain: Sometimes You Can’t Justify The Risk, But You Do It Anyway

Bernie Swain, Chairman and Founder of Washington Speakers Bureau, is my guest on episode 8 of the Disrupt Yourself Podcast. 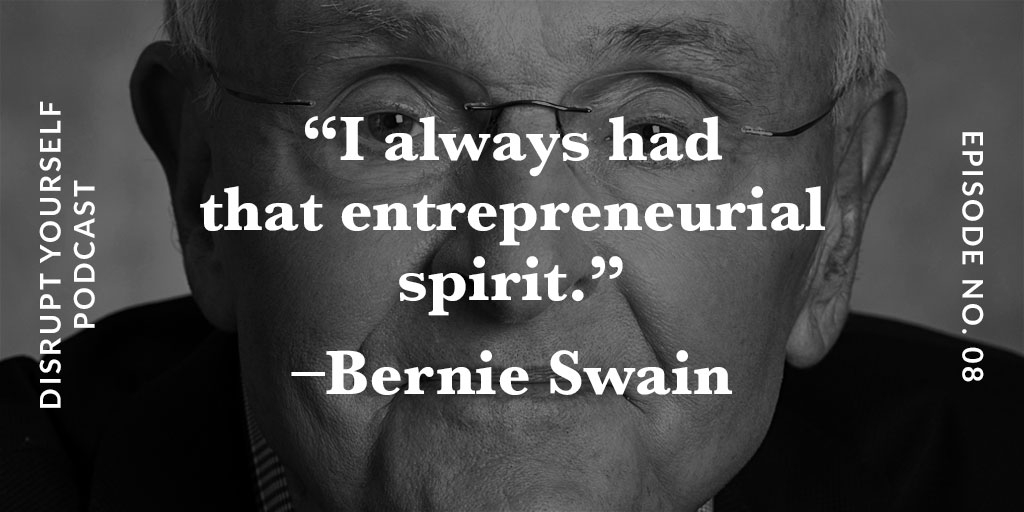 He is a little older than my previous guests. Retirement age, in fact. He has weathered the ups and downs of a long career. Now old enough to offer real insight.

Bernie launched his career before shelves were stuffed with books advising on leadership or entrepreneurship. Before you could shop at Amazon for every last word ever coined on the do’s and don’ts of business strategy. When asked about his own leap into starting a business, he says, “There’s no way I can justify it. I learned everything backwards. I learned by failure.”

In my work I focus on the need to take risk but to mitigate it by choosing the right risks. Bernie and his partners did this all wrong. When founding Washington Speakers Bureau, they mistakenly believed that there was very little competition. They blundered into it with zero expertise. “The biggest failure was the fact that I didn’t know there was an enormous amount of competition out there and I had no idea how to start a lecture agency.”

What exactly is a lecture agency?

For those who may wonder, a lecture agency, or speaker's bureau represents people who speak for a living. They would sign clients and then look for audiences interested in hearing their message. Washington Speakers Bureau may have had one of the most protracted, painful low-ends of an S curve I’ve heard of, but the tipping point, when reached, was phenomenal, and the skyrocket to success thereafter was spectacular.

Washington Speakers Bureau has long been the dominant player in the industry; its client list is a Who’s Who in everything. Politics, business, media, sports, etc. Bernie’s is a great story, laced with lots of insights on how to survive those early business setbacks that most of us will experience.

“I don’t think risk is a risk,” he says. “I think it’s a great opportunity, a great chance to discover….”

Learn more from Bernie Swain by listening below: