77. Beth Comstock: The Call of the Unknown

My guest today is Beth Comstock, former vice-chair of GE, a member of the Board at Nike, and author of the new book Imagine It Forward, a candid and encouraging narrative in which she shares both business and life lessons.

Despite having been a biology major in college, Beth realized early on that her passion led her to storytelling. Instead of becoming a doctor, as she originally planned, she turned instead to the world of television journalism. The call of the unknown led her to make many surprising leaps in her career, often with co-workers questioning her sanity, but Beth’s willingness to take a risk and play where no one else was playing allowed her to have a fascinating and varied path.

One of her most pivotal decisions came while working for CBS, the top network in the nation at the time. Beth received a call from NBC asking her to run communications for their low-rated news division, and Beth knew that everyone around her would think she was crazy to take it.

But she also knew she had to do it.

“In hindsight, it became perhaps one of the most pivotal career decisions I made…the team we put together, certainly the team I worked with in communications, we were incredibly scrappy and creative, and…it was one of my favorite moments in team building, bonding, creativity. And it proved to me I could do this. And I worked for somebody who allowed me to be creative.”

Beth’s creativity allowed her to pivot from television to innovation, trading NBC for its parent company, GE. Despite never attending business school or receiving traditional training in marketing, Beth eventually was tapped by the CEO to become the Chief Marketing Officer of the company. She focused on being an “incredible student” in her field, immersing herself in textbooks, calling other leaders in similar positions, and openly admitting to herself that she had a lot to learn. Her dedication paid off, and GE reaped the rewards of giving her the resources to succeed. 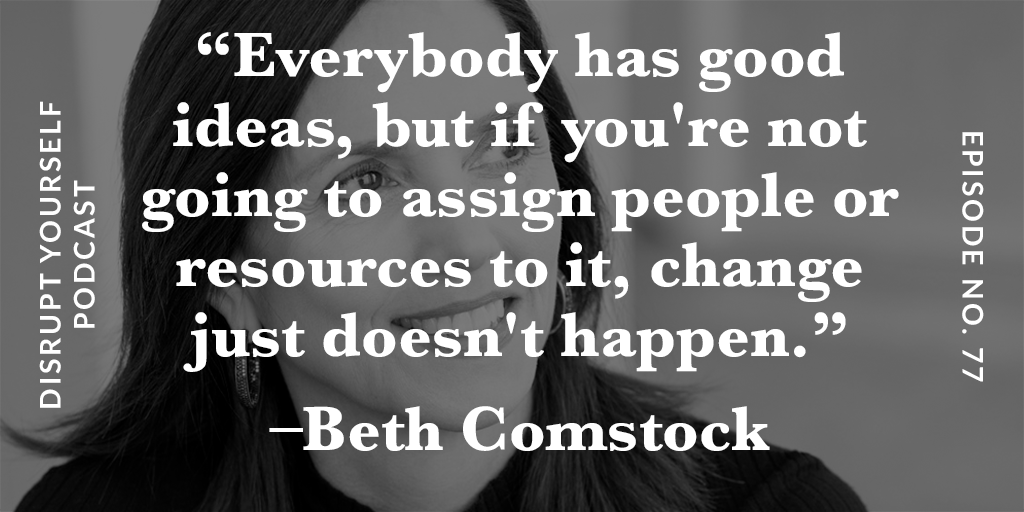 Join us as we discuss taking risks, the importance of communication, the difference between mentors and champions, and how Beth Comstock intends to start new again in 2018. Listen on iTunes or using the player below, and be sure to check out Imagine It Forward, available for purchase today on Amazon or at your local bookseller.