In anticipation of the re-release of my book, Disrupt Yourself, with Harvard Business Press (available for pre-order now!) we are continuing our look at the seven-point framework of personal disruption. Today, our interview focuses on Accelerant #4: Battle Entitlement.

Our guest on the podcast is Buster Scher, an individual who has worked extraordinarily hard to get where he is. He’s built a huge multimedia platform called Hoops Nation. He hosts shows for the NBA, as well as a weekly podcast. He regularly rubs shoulders with and is hired by NBA players and hip-hop legends for digital consulting. He’s had a career many people only dream of—and he’s only 19 years old.

Rather than let this success go to his head, Buster just keeps looking for what’s next on the horizon and is unapologetic about his aspirations. It is this drive that has gotten him to where he is today. Many in his same situation would have assumed that because of their age they “couldn’t” be taken seriously as a broadcaster or blogger, but despite the naysayers (and Buster has met many naysayers), he just went and did it anyway. 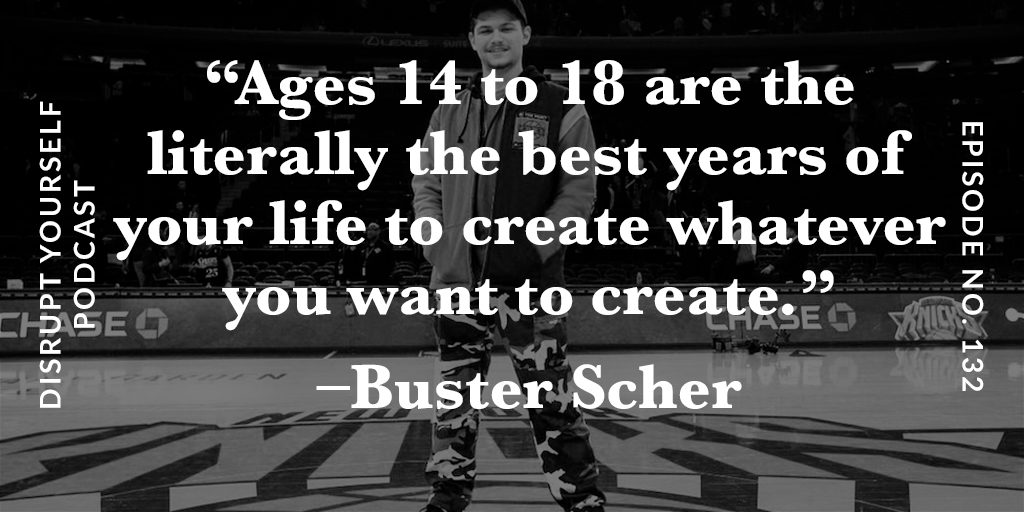 Ages 14 to 18 are the literally the best years of your life to create whatever you want to create. You should just be creating social accounts around whatever you're interested in, interning during the summer for whoever you're inspired by. Anything like that you should be doing, because I think 14 to 18 is when you can set yourself up for the next 75 years. You can make zero dollars from 14 to 18 and set yourself up to make tens of millions from 18 to 50.

It may not surprise you to discover that many of Buster’s biggest detractors are in his same age group. There is a strong cultural narrative about what he “should” be doing at this age—going to college—and the fact that he is already successful in a field that takes years to cultivate a reputation is strange and unnerving to some. Buster has learned to ignore those who feel entitled to this opinion, and continues to do what he loves anyway.

[I] definitely got made fun of a ton on every front. All the way dating back to when I was doing the fantasy basketball stuff, to this site called All NBA All Day, which I started in my sophomore year of high school in Connecticut. Everybody thought that was lame. Now it's just… now it's different. I don't play any attention to it…I'll keep doing my thing and hopefully making fun stuff.

When speaking of Accelerant #4—Battle Entitlement—there are a number of definitions that I use, but one of them is the belief that the more successful we are, the more we think we deserve that success. Buying into this mindset might look like thinking that because things have always been one way, they will always be this way. Or it could be dismissing the voices of people who we work with because of their age, education, or experience. All of these things can become huge roadblocks if you want to become a high growth individual.

Join us as we examine how Buster got started in broadcasting, his journey to success, and how he battled his own entitlement to find it.