One of the most generous networkers I know, Deb Mills-Scofield, introduced me to Caitie Whelan. Caitie is a former Congressional policy staffer turned Founder/Noter-in-Chief of The Lightning Notes, a short daily post to help us move the world forward. Here's her story.

In my head, the elevator pitch went like this:

I’m Caitie Whelan. I have no qualifications and no financing. I’m terrified of promoting myself. My big idea is as bulletproof as Swiss cheese. And, honestly, it’s not that big of an idea. It’s pretty small and I’m pretty sure it won’t work.

That pitch never saw daylight. But, six months ago, it dominated my headspace.

I was a Congressional policy staffer in DC. I’d worked for wonderful bosses on wonderful issues. But after five years, I’d realized policy wasn’t how I wanted to help move the world forward.

What I wanted to do was altogether different. In the face of big global problems, too many people felt too small to make a difference. And that’s a lousy way to feel. I believe one person is large enough to make an enormous impact. I wanted to remind people that they mattered and that improving the world was our matter. And I wanted to do it through writing.

Only I’d never written for a living.

It was a disruptive idea: making it real would drop a stick of dynamite in my life. And every time I gave it an ounce of thought, two pounds of doubt crashed down, stopping me from starting. 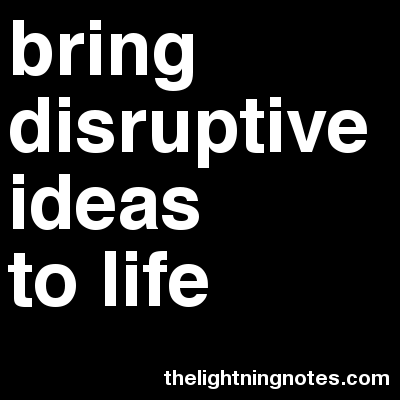 Personal disruption is hard. With change of any kind, there will be doubt of some kind. Doubt telling us we’ve got no capacity. Doubt puts all our attention on what we don’t have.

But one night, it hit me like a bus: I was letting my deficits define me. Everything I didn’t have had blinded me to what I did have.

And I had something: I had an idea I believed in. I had, as Whitney wrote in Dream, Dare, Do, the safe harbor of my convictions.

If I expanded my attention beyond doubt, I saw I had real assets. Sure, I was short on traditional currency. But I was flush in what Whitney calls emotional backing, pals and peers I could turn to for support. And, since I didn’t know the traditional rules of the writing game, I wasn’t bound by traditional protocols. I could pen my own playbook.

So, as Arthur Ashe put it, “Start where you are. Use what you have. Do what you can.”

Slowly, I began disrupting myself.

I got out of the hole of my deficits and climbed onto the firmer ground of my assets. The air’s clearer up there, clear enough to see possible paths forward.

I started writing. I built a website. And, in March, with excitement and terror cohabitating in my stomach, I left my wonderful job to make an idea I believed in real.

This April, I launched The Lightning Notes, a short daily post to help us move the world forward. It features striking stories and great ideas to remind us that we matter and improving the world is our matter. It’s a two-minute tribute to the capacity we each have to make an impact.

The rules of the road said that I needed ads to make money. But I’d never driven on that road and I didn’t have to play by those rules. I don’t like ads as a reader, and I don’t think it’s fair to serve my readers cake I don’t like. 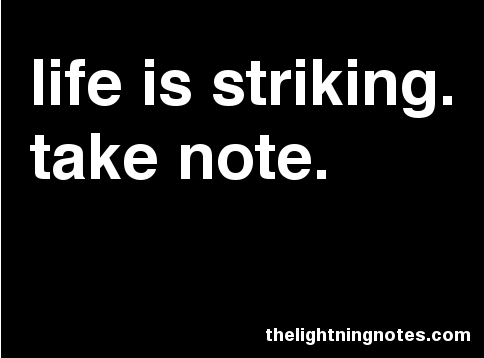 Taking a page from Whitney’s playbook, I decided to play where few others are playing. The Lightning Notes has no ads. Instead, I ask folks to make a small monthly donation. They don’t have to. But some already have. If 1,000 people contribute $8/month, The Lightning Notes is a sustainable enterprise. I’ve got miles to go, but I’ve started.

There are times when doubt interrupts me, when my deficits loom over my assets, and my footing feels shaky.

These times are like rainstorms. They pass, we dry off, and we shift our focus back to the firm ground of our assets. Because our lives are too abundant to be defined by what we don’t have, too short to spend pledging allegiance to our doubts. Like Stevie Wonder advised, “You gots to work with what you gots to work with.”

We weren’t born to stand in a hole, being defined by everything we don’t have. We were born to use all we’ve got to do all we believe. To take chances, to bring disruptive ideas to life, to make something happen in this world of ours.

And when a disruptive idea comes along, we can stand before the world on the firm ground of our assets and pitch it like this:

I might not know what I’m doing. But I do know that I have an idea I believe in. And that’s all I need to start.

Prior to The Lightning Notes, Caitie was a Senior Foreign Policy Advisor in Congress, co-founded a school in India for lower caste musicians, and raised pigs in Italy. She is a graduate of Brown University, the Salt Institute for Documentary Studies, and a 2007 Truman Scholar from the Great State of Maine. You can find The Lightning Notes on Twitter and Facebook.