Chester Elton: Cheering For Others

My guest today is Chester Elton, the New York Times bestselling co-author of The Carrot Principle, which has sold over 1.5 million copies to date. He has been described by the Toronto Globe and Mail as “an apostle of appreciation,” a moniker which he has whole-heartedly embraced.

Coming from an athletic and competitively-minded family, Chester has always seen value in recognizing individual accomplishments. While selling televisions in New York City Chester was given the opportunity to work as a recognition program salesman to pharmaceutical companies, a service he felt was not only necessary in the corporate world, but noble.

“When you’re selling employee recognition and somebody’s been with the company for, you know, 25 years or they’re the number one salesperson, or they’ve gotten a patent or they’ve…demonstrated extraordinary customer service and they get an award, well that’s an immediate connect the dot. And it’s just a feel-good industry.” 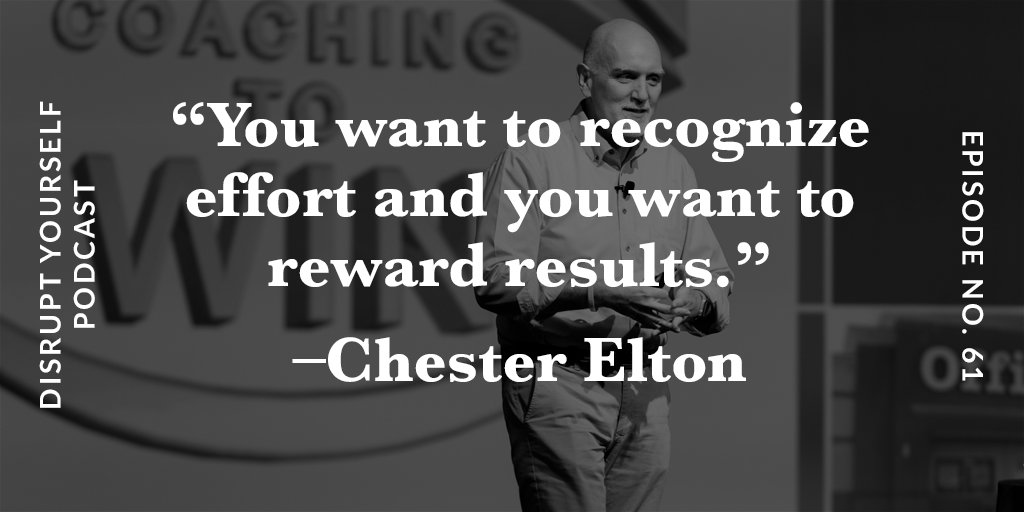 Chester soon approached his boss about a potential way to increase sales: write a book. If their company could be seen as a “thought-leader,” clients would come to them, hopefully in droves. His boss was very excited about the idea, but there was a catch: he wanted Chester to write the book.

“He goes, ‘I love that idea.’ He says, ‘Write the book.’ And I said, ‘Kent, you give me these crushing quotas every year. I’m a sales guy, I’m not a writer.’ And then he said something that really changed my life forever. He said, ‘You know what, Chester, you’re a smart guy. Figure it out.’”

Chester has certainly “figured it out.” He and his co-author, Adrian Gostick, have written over ten books on the importance of recognition (or “carrots”) in the workforce, and they’re not showing any signs of slowing down. Their latest book, The Best Team Wins, examines the new disciplines of high performance teams and the differentiators in the workforce that have sprung up in the past twenty years.

“You know, we’re doing all this stuff…to create a customer experience that has them…not just loyal customers. They’re raving fans of your products and services, and those are our five disciplines.”

Join us as we discuss the power of recognition, the five disciplines of high performance teams, and how the prodigal son ended up in Chester’s family coat of arms. Listen on iTunes or in the player below, and if you enjoy the show, please make sure you subscribe so you don't miss an episode.

The Carrot Principle: How the Best Managers Use Recognition to Engage Their People, Retain Talent, and Accelerate Performance by Adrian Gostick and Chester Elton

Managing With Carrots: Using Recognition to Attract and Retain the Best People by Adrian Gostick and Chester Elton

The 24 Carrot Manager by Adrian Gostick and Chester Elton

A Carrot a Day: A Daily Dose of Recognition for Your Employees by Adrian Gostick and Chester Elton

The Invisible Employee: Realizing the Hidden Potential in Everyone by Adrian Gostick and Chester Elton

The Best Team Wins: The New Science of High Performance by Adrian Gostick and Chester Elton

All In: How the Best Managers Create a Culture of Belief and Drive Big Results by Adrian Gostick and Chester Elton

What Motivates Me: Put Your Passions to Work by Adrian Gostick and Chester Elton