Over the past year as I considered how to implement Dare to Dream, creating a framework in which systergy could flourish, I was also involved on the Advisory Board of a micro-finance institution in Latin America. I was able to experience and examine how micro-finance could help women build better lives for themselves and their families, changing their circumstances in ways only made possible through these small loans.

In October 2006, Muhammad Yunus, the founder of Grameen Bank, was awarded the Nobel Peace prize for his pioneering the use of tiny, seemingly insignificant loans – dubbed “microcredit” – to lift people, mostly women, out of poverty. The Nobel Peace Prize Committee wrote in its citation: “Lasting peace cannot be achieved unless large population groups find ways in which to break out of poverty. Microcredit is one such means.”

As I brainstormed with one of my mentor friends on this topic, it occurred to me that the micro-finance model would be well-suited to our needs in connection with Dare to Dream.

As a general rule, micro-credit works like this: impoverished women, usually in developing countries, who rely on traditional skills and entrepreneurial instincts, obtain loans of less than US$200 to buy cows or chickens, or a sewing machine, or a cell phone, whatever the need, to start, establish, sustain, or expand very small, self-supporting, often home-based businesses. A key to the micro-finance model is the recycling of loan dollars. As each loan is repaid—usually within six months to a year—the money is recycled as another loan.

(an organization of women, who by daring and dreaming together, will make synergistic contributions to their own lives and the world)

(women borrow and repay loans of intellectual capital in the form of mentoring, allowing them to immigrate from one level of knowledge to another)

I began to test out my ideas around an Intellectual Immigration Fund earlier this year with a group of about 60 women.

Before we met as a group, about half of these women wrote down something that they wanted to accomplish, and delivered these dreams to me.

One wanted to learn photography; another wanted to become a wedding planner. By having this information in advance of our get-together, I was able to introduce each woman to someone who could help her achieve her dream. The one who wanted to learn photography was able to meet and spend time with a professional photographer. That professional photographer, who was engaged to be married, was later on the receiving end of systergy, as a woman who dreamed of becoming a wedding planner volunteered to help her with her wedding.

Systergy is the catalyst for Dare to Dream…we take out small loans from another individual in the form of advice, expertise, encouragement (intellectual capital, rather than financial). We then recycle our intellectual capital back in, by coaching another woman in areas where we have expertise. As we borrow, we are mentored. As we repay, we mentor someone else. And it is through the connections we establish, and the subsequent mentoring, we are able to create something greater than we could alone create. 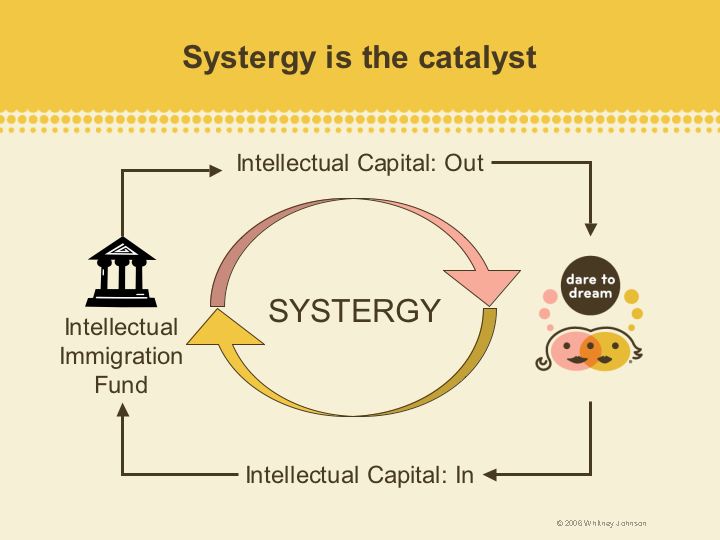 When I shared the idea of systergy with one of my mentor friends, she described the image of an open-air market, a farmer’s market, where fresh fruits and vegetables and homemade goods are bought and sold. There is bounty, there is exchange, there is a personal touch that is nurturing.

As I reflected on my friend’s thoughts, I looked up at my living room wall where my cherished pieces of artwork hang, works of art that I have collected largely during my travels to Latin America. To my astonishment and utter delight, more than a few of these tapestries, works of embroidery, and paintings include images of community, of women at market. 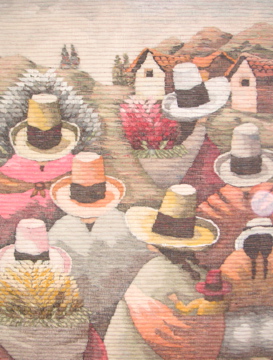 Come to market. Dare to Dream.