When his eight-year-old son asked Dave Hollis what his biggest fear was, no doubt he anticipated an answer along the lines of “tarantula” or “scorpions.” Instead, he received a brutally honest assessment: “Not living up to my potential.”

At the time, Dave Hollis was the President of Worldwide Theatrical Distribution at The Walt Disney Company—you know, that little start-up out of California that has distributed such niche films as Star Wars: The Force Awakens, Black Panther, and Toy Story. Dave had spent 17 years of his life working his way up the ladder at Disney, and to most of the world appeared to have achieved the apex of his career.

But Dave didn’t feel that way.

Despite working for one of the biggest (and in Dave’s opinion, greatest) companies in the world, he couldn’t escape the feeling that he was no longer challenging himself in the role that he occupied. He had an amazing team, amazing support, and given the track record of the company also had little resistance to do whatever he wanted to do for theatrical distribution. But he wasn’t challenged, and that was a problem.

“I had a conversation with my wife that came out of me not showing up as well for my life as I had when I was more challenged by my job. In some interesting ways I let the challenge of my job dictate a little bit of how I was as a husband, how I was as a parent. I started just pulling back. I'd go on really long runs, I was putting on headphones and playing video games, one after work drink was turning into two or three. I just wasn't the best version of myself…I needed to abandon certainty and that was the catalyst for making a big change.” 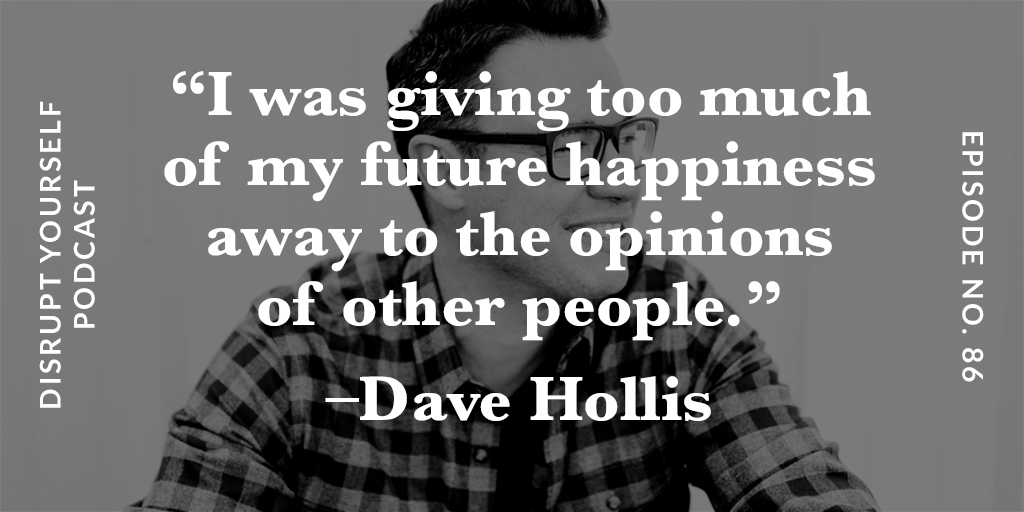 Co-mingled in this story is that Dave’s wife is Rachel Hollis – author of the best-selling Girl, Wash Your Face and an influencer in the world of personal growth. At the time of this hard conversation, Rachel was at the beginning of her journey into self-discovery and empowerment, and Dave knew that if he didn’t continue to progress they would be in danger of losing the strong relationship that he valued simply because Rachel would keep growing while he stood still.

So, he left The Walt Disney Company.

Dave is not only seeking to improve his life; he and his wife are seeking ways to disrupt others lives, as well.

Disruption at its finest.

There’s more to this story, and I hope you’ll take the time to listen to it. Download the episode on iTunes, or listen using the player below. If you like what you hear, leave me a comment and you may get a shout-out in a future episode!