My guest today is David Meltzer, entrepreneur, speaker, author, and CEO of Sports 1 Marketing. His personal objective in life is to “make a lot of money, help a lot of people, and have a lot of fun.”

Takeaways from the episode: 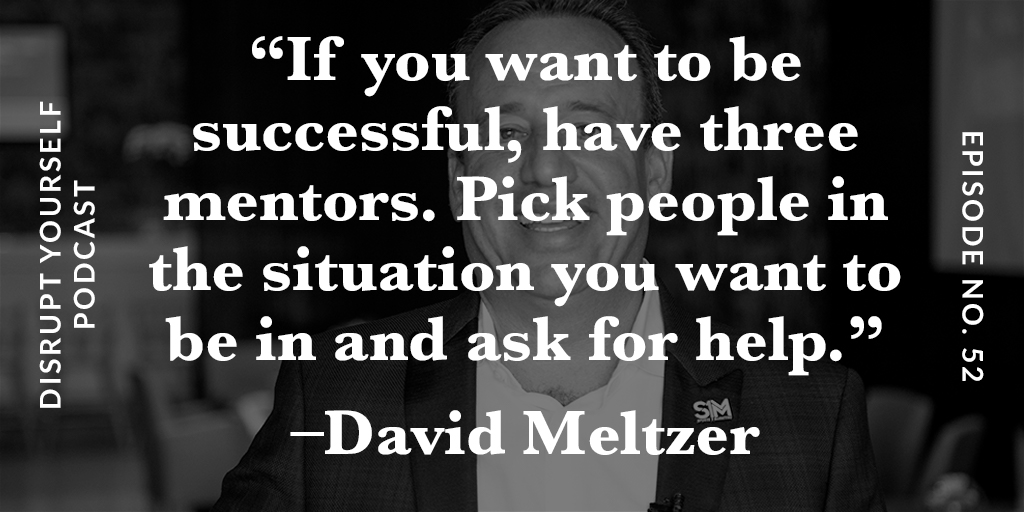 After spending only a few minutes in his company, it is apparent that having “lots of fun” is not difficult for Dave. Dynamic and engaging, Dave was told as a child that he could sell ice to an Eskimo, and his career path indicates that he might have succeeded had he ever been put in that situation. His first job out of law school was selling legal research online for West Publishing, a position intended for individuals with at least four years of litigation experience. Years later, he was made the CEO of Leigh Steinberg Sports & Entertainment, the world’s most notable sports agency, only 48 hours after meeting Leigh Steinberg himself.

But while success appears to come naturally to Dave, he admits that his priorities became skewed over time, resulting in financial ruin and an emotional plea from his wife for him to look at who he was and what he wanted to become before he lost his family as well. This moment created a paradigm shift for Dave, leading him to focus on others and how he could best serve their needs instead of his own.

I figured out this idea that, “What if I was of service?” And part of being of service isn’t just, you know, walking the streets of Calcutta giving away everything I had, but asking people what they needed. Not telling them what you had…so I started surrounding myself with the right people and the right ideas…and asking “what do you need?”

Join Dave and I as we discuss happiness, mentors, and how to pursue your potential through an attitude of gratitude. Listen on iTunes or in the player below, and if you enjoy the show, please consider clicking here to leave us a review.

Links from the Episode & Transcript

Connected to Goodness: Manifest Everything You Desire in Business and Life by David Meltzer

The Power of Intention by Dr. Wayne Dyer

Compassionate Capitalism: Journey to the Soul of Business by Blaine Bartlett and David Meltzer

Gary Vaynerchuk on The Playbook

Download the first chapter of Build an A Team