Diane Dietz would have happily spent her career working in marketing at Proctor & Gamble, but as we all know, life can be unpredictable.

When she found herself seated next to a tall, dark, and handsome stranger at a wedding, she could not have predicted that she would someday move from Cincinnati to San Francisco to start a family with him. That unpredictable relocation led to a significant career disruption, taking her from leading the marketing for the oral care division at Proctor and Gamble to the CMO position at Safeway, where she led the marketing, merchandising, and supply chain for the second largest grocery retailer in the US.

Seven years later, Diane’s world was again disrupted not only by Safeway being acquired by a private equity firm, but also by her daughter growing seriously ill and requiring specific medical attention. She took a year off from work and focused on her daughter’s health, while taking the time to gain perspective on what mattered.

“I really kind of changed my view of this, “I got to get to the next biggest job in the biggest company and biggest role,” to really trying to find something that gave me purpose and gave me focus on things that really mattered to me…I always say never waste a crisis because it really does provide clarity.”

Even after being a chief marketing officer, executive vice president, and responsible for over 12,000 employees, Diane still felt some hesitation when she was approached by a recruiter about the CEO position at Rodan + Fields. Up to that point she had been looking at the number two position at really large companies, but as she met with the team at Rodan + Fields she fell in love—only this time with a company.

“It just felt like so much opportunity to me, but I still had all those little thoughts inside of, “Is it too small? It’s not public, it’s a different model, and am I ready?” Inside I still had that little negative voice saying, “You know you’re not ready yet…” I’m glad I had mentors that pushed me and I’m glad that ultimately I pushed myself…” 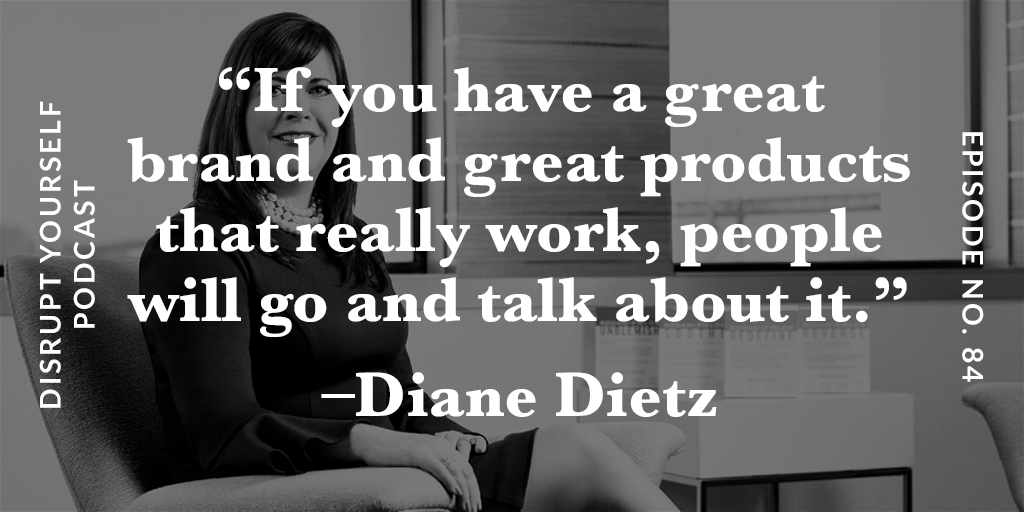 Diane accepted the position and has grown Rodan + Fields from 600 million to 1.5 billion in sales (which I find super impressive). Furthermore, she has built an amazing team wherever she goes, and in her mind, there is no reason why leadership should be lonely at the top. She puts in the effort to get to know the people she works with, and in many ways grows to love them like family.

“Open yourself up and get to know the people that work with you and for you and be vulnerable…they will work so hard for you when they feel that type of feeling back for you.”

Join us as we discuss how she spots talent for her “A Team,” what she loved most about her favorite bosses, and how Rodan + Fields manages their exponential growth without spending for digital advertising. Download the episode on iTunes or listen in the player below, and be sure to leave a comment—I love feedback!